Last Tuesday the new British Columbia NDP government announced it was raising the province’s minimum wage to $15 an hour by 2021. The new government had already announced it would raise the minimum wage by 50 cents on September 15, bringing it to $11.35 an hour. In fact, this 50 cent raise had been planned by the previous Liberal government. 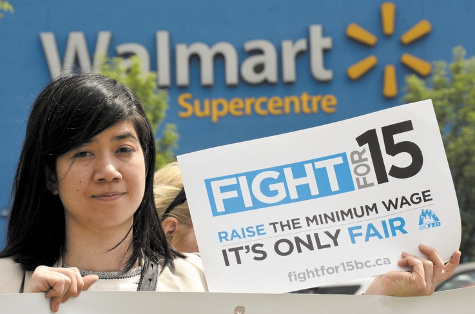 The announcement makes British Columbia the third province to bring in a $15 minimum wage. This is undoubtedly a win for the larger Fight for $15 movement in Canada and the United States.

However, the four-year phase-in to $15 is the longest pathway so far in Canada. The Alberta NDP, the first to bring in a plan for $15, is doing it within 24 months. The Ontario Liberals are aiming to do it in 18 months, with the bulk of the raise coming within six months.

The BC NDP’s extremely slow rollout of the minimum wage increase leaves much to be desired. There has been no outline of scheduled increases to $15, simply an announcement that a “Fair Wages Commission” would consult “stakeholders” about a timeline. They are also planning on keeping the liquor server exemption to the minimum wage. It currently stands at $9.60, but will be raised by 50 cents to $10.10 an hour on September 15, still well below the general minimum wage.

The BC NDP’s announcement also tried to address the fears that a minimum wage increase would hurt businesses. The Minister of Labour, Harry Bains, told the media, “we’ve listened to business owners, who have told us gradual, predictable increases are the way to go to minimize the impact on their businesses.”

In fact, there is already a strong indication that the business community will use the Fair Wages Commission to further delay or even kill the proposed $15 minimum wage. Stephan Truscott, the Canadian Federation of Independent Businesses BC spokesperson, has already said the proposed hike by 2021 is too much, too soon. He advocated for a six-year phase-in, or $15 by 2023!

The Fair Wages Commission will certainly give the opponents of the minimum wage hike both space and time to organize against the proposed increase and push for offsets. When asked about policies such as tax breaks or relaxing labour laws to mitigate the cost to business owners, NDP Labour Minister Bains said the government would consider it. But placating the business lobby will not work. The tepid rollout by the BC NDP will simply embolden the forces lining up against the minimum wage hike.

The business lobby can already smell blood. Green Party leader Andrew Weaver helped to quash the NDP following through on their campaign promise of card check union certification. And Weaver is sending mixed signals about the $15 minimum wage, saying that while he welcomes it, he opposes the government’s timetable of 2021 preferring the Fair Wages Commission to be allowed to impartially determine the phase in. Weaver supports consultation with small business and stated, “minimum wage is just one way we can move toward all British Columbians having a livable income.”

This is not exactly a ringing endorsement of a $15 minimum wage by the Green Party. Given the NDP’s reliance on the Greens to be able to hang on to government this is a wedge that can be exploited to water down the NDP’s most progressive campaign promises. It is also worth remembering the NDP’s minority government status can equally be exploited by labour and the left to wrench out concessions, but this requires a willingness to fight.

The BC Federation of Labour has voiced its displeasure with the BC NDP’s timeline saying the province should follow the lead of Alberta and Ontario. The BC Fed launched the Fight for $15 campaign in the province in 2014. The campaign has involved other community allies and has been fairly successful at gathering petition signatures. Unlike the Fight for $15 and Fairness in Ontario, however, it has not been successful at organizing a broad grassroots campaign. The campaign has not built community, campus, or workplace chapters. Nor has it been able to link its demands with workers in struggle, as we saw with the $15 strikes by Mississauga library workers and food service workers at York University and UofT-Scarborough.

The low level of self-activity by workers in the campaign, especially outside Vancouver, has meant much of the early excitement and drive of the campaign has fizzled. Regular campaign events have dried up and the focus has been on lobbying and the election.

Now faced with an NDP minority government committing to implementing $15 at a snail’s pace and a hostile right-wing business lobby, the Fight for $15 and the BC Fed will face a serious challenge. The low-level of activity in the campaign over the last nine months means it has less capacity to pressure the government.

Rebuilding a Struggle for $15

The Fight for $15 and the BC Fed should aim to roll out an aggressive campaign that pushes for faster timelines, getting rid of minimum wage exemptions, and advancing demands in other areas like fair scheduling and sick days. This will require more resources and a focus on building the capacity of workers across the province to engage in the struggle. If there is political will inside the labour movement and amongst community allies this can be done.

Considering the BC Liberals kept the minimum wage frozen from 2002 to 2010, and housing costs are spiralling out of control in Vancouver and other parts of the province, there is no good reason for the BC NDP’s slow timeline to $15.

Leaving the liquor server exemption to the minimum wage in place, having no firm timetable for increases, giving the business community a platform to resist the increases via the Fair Wages Commission, and signalling an openness to implementing business-friendly policy offsets reveals a lot. Instead of raising the bar to address poverty wages for workers as many dippers would expect, the BC NDP is lowering the sights of the movement across the country.

The BC NDP’s announcement is a victory for the Fight for $15 movement. But the delayed rollout shows that a grassroots movement aimed at organizing and mobilizing workers across the province is needed to stand-up to the business lobby and force governments, even one’s led by the NDP, to pass much needed reforms for workers in the here and now. •