How New York Subways Got Broke, On Purpose

New York City Mayor Bill de Blasio is pushing for a tax on the rich to fund desperately needed improvements to the crumbling subway system run by the Metropolitan Transportation Authority (MTA). De Blasio’s plan would raise city income taxes on individuals making over $500,000 a year and couples making over $1-million by about half of a per cent, which would raise over $700-million for subway and bus upgrades as well as half-price Metro Cards for the almost 800,000 city residents who are at or below the federal poverty level. 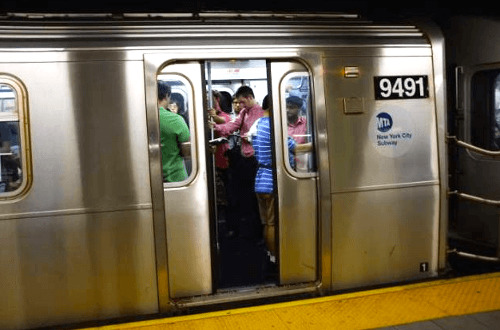 Predictably, New York State Senate Majority Leader John Flanagan, a Republican from Long Island, shot down the proposal in a statement declaring that “raising taxes is not the answer.” Flanagan didn’t bother providing his own answer to the MTA’s dire problems, presumably because he’s fine with the status quo in which working class New Yorkers pay ever more money for a transit system that is in deep crisis.

Thanks to consistent underfunding from the state, subway delays have increased almost threefold since 2012, and derailments have become ever frequent. In a hyper-gentrified city like New York, the impact of these problems is profound for millions of workers who cannot afford to live near the central business districts.

A survey by the office of New York City Comptroller found that 54 per cent of respondents from the Bronx experienced delays “more than half of the time” or “always,” compared to only 25 per cent of Manhattanites. The study also found that residents of low-income neighborhoods were 14 per cent more likely to be reprimanded at work on account of subway delays.

The starving of the transit system in the wealthiest city in the world – overseen by Republicans and Democrats alike – is as big an indictment of the greed and shortsightedness of the 21st century American ruling class as anything that comes out of the mouth of the current president.

Yes, public transportation is a vital need for working people – a 2007 report sponsored by the Department of Housing and Urban Development found that households living near good transit spend 9 per cent of their income on transportation, while those living in more auto-dependent areas spend closer to 25 per cent.

But while bosses would rather not cover worker transit expenses through increased taxes or company transit benefits, they also rely on a functional transit system for their workers to arrive to the job site safely and on time.

Beyond that, viable transit systems are vital to the larger capitalist economy, connecting workers to employers and consumers to products, and enabling urban development, from which the real estate, construction and financial industries profit.

The history of New York’s subway system highlights this contradictory nature of public transit under capitalism. In the early years of U.S. capitalism, bosses often built company towns to locate their workforce near the job site. The American landscape is dotted with erstwhile such towns like Lowell, Massachusetts, founded by Boston Manufacturing Company in the 1820s, and Pullman, Illinois, site of the famous 1894 strike led by Eugene Debs’ American Railway Union.

Company towns were never economical in New York City due largely to its sky-high land costs. A mass transit system was therefore needed to facilitate employers’ access to labor markets and satisfy the appetites of land speculators and developers for expansion into the outer boroughs of the Bronx, Brooklyn and Queens.

First came the elevated railway lines built in the second half of the 19th century by private companies which charged fares that were largely unaffordable to the city’s working class.

At the start of the 20th century, in what would today be considered a public-private partnership, the city helped finance the construction of the subway system and permitted two private monopolies, Interborough Rapid Transit Company (IRT) and Brooklyn-Manhattan Transit Corporation (BMT), to operate the lines.

By 1940, the city had bought out the two monopolies. But in 1953, in response to the subway system’s financial woes, the state of New York placed the system under the control of the NYC Transit Authority, whose board members were appointed by politicians, immunizing the agency from public pressure.

In 1968, the MTA was born after Gov. Nelson Rockefeller combined the NYC Transit Authority with the Long island Railroad, Metro North commuter lines and Triborough Bridge and Tunnel Authority that had been built up by Robert Moses.

In the mid-1970s, New York’s elites used the city’s fiscal crisis to roll back numerous social programs. They increased transit fares from 35 to 50 cents, introduced tuition at CUNY, closed public hospitals, and laid off tens of thousands of public-sector employees.

Meanwhile, the city government began to promote gentrification – at this point, a relatively marginal movement of middle-class homeowners – as a way to boost its declining tax base by staving off the flight of capital and better-off residents to the suburbs. Naturally, the real estate industry shared the city government’s interest in gentrification. Declining investment in cities during postwar suburbanization and the ‘white flight’ of the 1960s had driven down property values and rents across the city.

Real estate interests stood to profit from what geographer Neil Smith would later call the “rent gap” between current rents and potential rents that could be generated by attracting white-collar industries and their affluent employees back to the city. To attract these constituencies to the city, the faltering subways required serious renovation. By the early 1970s, the system – with an annual ridership less than half of its 1946 peak of 2 billion – was decrepit and had achieved an unsavory reputation for crime.

In the 1980s, the MTA rebuilt every main line track and introduced a new fleet of clean, un-graffitied cars. But the money for these improvements came largely out of the pockets of working-class New Yorkers.

The half-fare senior program and the half-fare Sunday program were eliminated, and as the government has continued to divest from the MTA, it has had to take on more debt to fund its budget. To pay this debt, the MTA raised fares, which have increased from 50 cents in 1980 ($1.57 in today’s dollars) to almost $3 for a single ride today.

Since 2011, Gov. Andrew Cuomo has habitually raided the MTA’s budget to pay for non-transit items and diverted funds from subways, trains and buses to road projects and bridge lights.

The installation of cashless fare booths will cost the MTA $500-million, while the operation of the program will cost an additional $149-million over the next four years. Cuomo is also diverting $200-million from the MTA budget to install fancy lights on seven MTA bridges and two tunnels for the sake of impressing tourists.

Likewise, instead of prioritizing the maintenance and upgrade of the system, the MTA has spent billions expanding subway service to wealthy neighborhoods, like the $4.5-billion first phase of the 2nd Avenue extension along the Upper East Side.

In this context, de Blasio’s “millionaire tax” to fund transit infrastructure upgrades is direly needed and clearly feasible. The Seattle transit system created a similar program in 2015 for residents with household incomes of less than double the federal poverty level. The program has so far reduced bus and light rail fares for over 40,000 low-income riders.

But it remains to be seen if de Blasio plans to fight for his proposal or if he is simply posturing ahead of this fall’s mayoral election, knowing that approval in Albany’s statehouse – whose next legislative session does not meet until January – is highly unlikely. It was only a few months ago that de Blasio refused to support the idea of discounted fares for low-income riders.

Either way, the self-styled progressive mayor continues to support the criminalization of turnstile jumping, and even claims that it’s “not an economic issue” because riders “have money on them” and sometimes even “weapons” – despite numbers showing that this is the case for less than 1 per cent of those arrested for fare evasion.

While upstate and suburban Republicans have made their opposition to the millionaire tax apparent, state Democrats like Cuomo and Comptroller Thomas DiNapoli have tried to divert attention away from the proposal by urging the city to use some of its budget surplus for the subway system’s immediate needs.

Their ideas were laid out in MTA Chairman Joe Lhota’s $800-million rescue plan, which sprinkles a few welcome infrastructure improvements over miserable plans to eliminate seats from some subway cars to mitigate overcrowding and more cops to enforce of “quality of life” offenses such as littering.

This last proposal is part of the notorious “broken windows” policing methods that disproportionately affect working-class communities of color. According to the Police Reform Organizing Project, over 90 per cent of the 29,000 arrests for fare evasion – the number one reason for arrest in 2015 – involved people of color.

We need a strong campaign from riders and transit workers working together to win both a millionaire’s tax and the decriminalization of fare evasion politicians. Otherwise, state and city politicians of both parties will continue to pass the cost of a decaying transit system onto working New Yorkers. •