The Summer of Fear for New York Subway Riders

After months of increasing delays at all times of the day and night, a series of incidents have now raised an even more urgent question: about the daily safety for those who ride and work on New York City’s Metropolitan Transportation Authority (MTA). 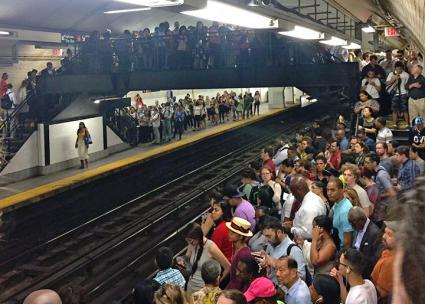 On July 17, the Monday morning commute ground to a halt for anyone in need of the A, B, C or D lines when a track fire trapped two trains full of people underground and disrupted service for tens of thousands trying to get to work.

Four days later, the derailment of a Q train at Brighton Beach – the fourth derailment on an MTA subway this year – shut down service for five hours, with passengers forced to evacuate. That same day, jam-packed rush hour trains from the Roosevelt Avenue transit hub in Queens were stalled for hours due to signal problems.

A 2005 New York magazine article about the chronically underfunded MTA by Clive Thompson opened with this hypothetical scenario:

“Picture this: Sometime in the near future, you get on a subway train heading into Brooklyn, and zoom into the tunnel. Unbeknownst to you, though, something bad is happening on the other side of the river. A track fire is smoldering. Throughout the subway, there is fine-grained metal dust that comes from the constant grinding of wheels on rails. It’s combustible stuff, and tonight, as the train ahead of you leaves the station, the 600-volt current from the third rail arcs and ignites some of the dust, like a Fourth of July sparkler. The sparks torch a mess of paper wedged on the tracks, left behind because budget cuts have resulted in fewer cleanups.

“Normally these fires are a mere nuisance – but this one really gets going, and soon the tunnel ahead of you fills with acrid smoke. The tunnel’s nearest ventilation fan hasn’t been fully repaired, so the smoke doesn’t clear. The motorman tries to contact his command center, but his radio has hit one of the system’s ‘dead spots’, so he gets no signal. Chaos ensues: The car fills with smoke, nobody has any clue what’s going on, and a bunch of passengers start kicking out windows in a bid to escape.”

There’s a growing sense that this nightmare scenario could happen any day. The dangerous combination of budget cuts, neglect of upkeep and any number of unfortunate but not uncommon events could create a disaster on the scale of London’s Grenfell fire.

As in London, this situation reflects a tremendous disregard for the safety of transit workers and ordinary people who have no choice but to rely on the subways to make it from home to work and back.

Who will take responsibility for this gathering state of emergency? On the local level, city and state officials are eager to absolve themselves of the financial and moral burden. The debate taking place is about who is responsible for funding the MTA.

Mayor Bill de Blasio says the state of New York needs to step up and help fix the problem and that the state budget should allot more funds to the MTA since it is such an outsized proportion of the state’s transit system.

Lhota is working to draft a plan to modernize and fix the New York City subway system, but if his suggestion to ban food in subway stations in order to stop track fires is any indication of the direction he will take things in, there can be little hope that anything good will come from this plan. For one thing, blaming commuters who eat food for causing track fires is a ridiculous assertion, considering that one of the first impacts of budget cuts to the transit system has been fewer trash cans in stations and less regular track cleaning.

The last thing that would make for a better subway experience is for cops to be deployed to ticket and harass anyone eating a sandwich or littering when there are no garbage cans to be found.

But this blaming of ordinary people fits in with the constant privileging of big spending projects – such as the extension of the Second Avenue subway line and the Hudson Yards luxury station on the west side of Manhattan – over the more basic maintenance and repairs that would make the everyday use of the subway safer and smoother.

Mayor De Blasio, too, thinks of the subway primarily as a way of expanding the boom in the housing market as his proposal for a BQX trolley along the waterfront from Brooklyn to Queens shows.

Workers to the Rescue

But don’t take my word for it – listen to the real experts, the men and women who make the subways and buses run, the members of Transport Workers Union (TWU) Local 100 that represents MTA workers. This week, they put out a 10-point plan for fixing the subways.

“The lesson that needs to be learned is that you can do all the long-term investment you want in a capital plan, but you can’t forget about day-to-day reliability of the system,” explained TWU President John Samuelsen in stressing the need for more upkeep.

The TWU plan calls for more regular preventative inspections, more maintenance, back-up plans for when cars go out of commission, and more staff to carry out these tasks. Indeed, the same supposed lack of funds to maintain the trains is regularly used as a pretext to dangerously understaff the transit system and then scapegoat the union for the resulting problems.

In mid-July, for example, the union filed a grievance on behalf of a pregnant employee who couldn’t even take a bathroom break due to understaffing.

The scapegoating of the union by city and state politicians is cynical and reactionary – but it is also what intrinsically binds the interests of transit workers with transit riders.

More than 100 activists attended a July 22 film screening sponsored by the Democratic Socialists of America (DSA) about the Los Angeles bus riders union. The screening was followed by a discussion about the power that could be unleashed if train riders and train workers linked forces around demands for improvements.

While the politicians that run New York try to pass the buck, life for working people in the city is becoming more unlivable and more precarious. Our lives are being put at risk by the interests of capital, and those that serve it.

At this moment, we are a far cry from being able to generate enough pressure to compel the politicians to pursue a different course, but that storm is brewing. It is up to socialists and the rest of the left in New York City to put organizational muscle behind demands to improve the crumbling transit system.

This issue isn’t going anywhere – and we may not be either if we can’t force the state to fund our means of transport. •