If you ride the New York City subway system, then you’ve become accustomed to reading the signs in stations across the city that let riders know about service changes. Most often, there are delays, or you find that you must take a different line to get to where you need to go. On the morning of March 28, though, many subway riders found a very different message: “FREE ENTRY. No Fares Collected.” This was part of an action carried out by activists calling themselves the “Rank and File Initiative.” The press release about the action announced:

“This morning before rush hour, teams of activists, many from Occupy Wall Street, in conjunction with rank-and-file workers from the Transport Workers Union Local 100 and the Amalgamated Transit Union, opened up more than 20 stations across the city for free entry…

“Teams have chained open service gates and taped up turnstiles in a coordinated response to escalating service cuts, fare hikes, racist policing, assaults on transit workers’ working conditions and livelihoods – and the profiteering of the super-rich by way of a system they’ve rigged in their favor.” 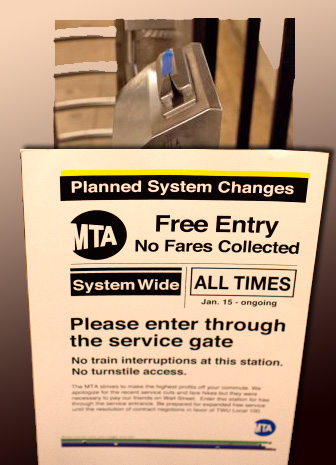 The decades of slashed Metropolitan Transit Authority (MTA) funding have created an inverted flow of money. Instead of being a city-funded service, the transit system has become what Rank and File Initiative aptly calls “an ATM for the super rich.” In the face of budget cuts, the MTA has had to sell massive bond issues to Wall Street in order to cover costs. This means that the system is required to divert funds from transit services toward paying back the billionaire bondholders. And this is all happening in a context where the Transport Workers Union (TWU), arguably the most powerful workforce in the city, has been working without a contract since January.

So there is no shortage of reasons to be frustrated, mad and disgusted with the bosses and city government that control funding for the MTA, and that are raising costs, cutting services, harassing young people of color and putting a boot on the TWU’s neck. But the free subway action, as exciting as it felt to see the turnstiles open that day, is tied to a whole range of questions about how our movement can best organize in a partnership with labour.

While thousands of New Yorkers rode the subway for free that morning and saw the condemnation of Wall Street on posters, some station agents are facing threats of discipline, including home visits by the New York Police Department (NYPD) and the FBI because they theoretically violated work rules by not stopping the action. Organizing solidarity is urgently needed to respond to any disciplinary actions that may be taken against these workers. Because of these repercussions, the relationship between Occupy and rank-and-file workers in TWU Local 100 has been placed on a more tenuous footing.

TWU has supported Occupy from the beginning, unanimously voting to become the first union to endorse the movement last September. When Zuccotti Park was being evicted, Local 100 refused to drive buses to aid the NYPD in arresting protesters. This support aided the Occupy movement enormously, and it’s important to move forward on a basis of mutual respect and collaboration. Local 100 President John Samuelson announced that union members have no intention of distancing themselves from Occupy over this action, but went on to say: “They could’ve taken more precautions to make sure [subway station agents] weren’t put in harm’s way.”

The TWU is capable of powerful, citywide action. In 2005, when the union went on strike for two-and-a-half days in December, everything ground to a halt. But because of the Taylor Law, which makes it is illegal for public-sector workers in the city to strike, the union remains in a tough spot, after it was hit with a multimillion-dollar fine and had dues check-off taken away for several years. This has resulted in disorganization and demoralization among members still trying to sort through what happened in 2005. It will take discussion among members and organizing at the rank-and-file level for the union to regain its fighting confidence – and that’s a process that can be aided by outside support from Occupy and other sources.

But when it comes to the struggle against the MTA, it’s still those who work in the stations, on the trains and on the buses who are in the best position to organize the fight for a fair contract and all the issues that are tied up with it.

The decades of attacks on unions, paired with the recent experience of the 2005 strike, mean that workers aren’t in a strong position right now. But to draw the conclusion that this means small bands of activists must substitute themselves for the self-activity of transit workers is a mistake.

This fare strike was a step away from the type of solidarity that activists in Occupy should aim to build – because it put the most vulnerable workers in a position to be targets for backlash, with consequences that the links between the union and the Occupy movement could potentially be weakened.

Either this was a mistake that can be learned from when planning future actions, or it is part of the perspective of some activists that in order for direct actions to be successful, someone has to be arrested or disciplined. The danger of not understanding the problem with this attitude is that when direct actions backfire against our allies, it alienates people, instead of drawing them into a stronger bond of solidarity.

The yardstick for the success of an action can’t just be the disruptive effects against the 1 per cent, but how it increases the political and self-organizational capacity of the working-class. Sometimes, the action of a small group of people can achieve that, and sometimes it can’t.

This doesn’t apply only to the activists in Occupy Wall Street, but to the union members involved as well. It is possible that individual members or leaders of Local 100 were part of planning and carrying out the fare protest, but this doesn’t change the problematic nature of the collateral damage our side is facing. Union members and Occupy Wall Street activists – all organizers, really – need to think critically about our tactics if our movements are to grow in size and in militancy.

There are other actions we could organize to take on the MTA while building public support for the struggle of TWU workers. Offering free rides to travelers by swiping people in with unlimited cards is one idea. Having speak-outs and engaging in civil disobedience in major train stations is another, with more potential for spreading the word to people who may sympathize with the struggle. There are no shortage of directions we can go.

But a conscious approach that thinks critically about potential repercussions, whether actions strengthens workers’ ability to fight back, and how they lay the ground for more protest in the future must be a key element. We cannot organize based on what the most militant-sounding tactic is. We need an approach that recognizes the power of transit workers and sees the key role that Occupy can have in opening up space in New York City for more actions.

The fact that the TWU isn’t waging a big fight right now doesn’t mean that it never will. A key aspect of solidarity is recognizing the inherent power that the movement’s different allies have, even if it is currently dormant – and organizing protests and actions that can help it come to the surface and develop. The TWU can shut the city down. Its ability to gain the support and confidence to do so can be aided by the Occupy movement. And vice versa – the Occupy movement can only be strengthened by the support of TWU. These mutual relationships aren’t automatic, but must be built.

The next big opportunity to do so in a concrete way is May Day, which is International Workers’ Day. There are a number of actions planned for May 1, including a mass solidarity demonstration under the slogan: “Legalize, unionize, organize to fight the 1 per cent.” [Ed.: for example, see “May 1st Student Walkout.”]

May Day can be an important step forward in solidifying relationships among Occupy activists and labour activists. But, frankly, it could also be a step backward if small groups take this as a call to substitute themselves for the self-organization of workers in workplaces across the city, as ended up happening with the MTA action. This could widen, not close, the distance between the Occupy movement and the labour movement – as well as a broader audience, too.

The experience of the fare strike action should guide our approach to organizing for a stronger movement that strives for a militant approach, but one that is driven by the goals of fighting the 1 per cent in every workplace and every community. Shutting the city down – not just in word, but also in deed – will require the active participation of the TWU and other workers across the city. These connections are critical to make and will determine the future of the Occupy movement. •

This article first appeared on Socialist Worker. Amy Muldoon contributed to this article.