Democracy in the Age of Austerity: Beyond the Robocall Scandal

A lot of people are angry about the robocall scandal. Even by the low standards of the Harper Conservatives, the covert attempt to block thousands of people from voting in the 2011 federal election is pretty disgusting. In a recent poll, 75 per cent of respondents said they want a formal inquiry into the Conservative Party’s dirty campaign tricks. Anti-robocall rallies have been held in more than 25 cities. At a rally in Saskatoon last month, protestor Nayyar Javed told the crowd: “Democracy is very important to me. […] We are complacent or are in denial about the erosion of democracy.”

To people who recognize that real social change isn’t going to happen through the existing democratic system, being concerned about robocall can seem like a waste of time and energy. But when robocall is viewed from a broader perspective, it can begin to take on real significance. In fact, there are good reasons for viewing robocall as but one covert episode in a whole series of attacks on democracy that are happening right out in the open.

In the past year alone governments in Canada and Quebec have stopped unions from exercising their right to strike, cut funding to a range of social assistance programs, privatized public services, beefed up the state’s brutal and racist systems of imprisonment and deportation, raised postsecondary tuition, pushed the public broadcaster toward new forms of marketization, and moved to criminalize protest against the oil industry and Israeli apartheid.

The aim of the robo-Conservative black-op was to obstruct anti-Tory voters from casting ballots. But it was also part of the broader agenda of Stephen Harper, Dalton McGuinty, and governments around the world, which is about a full frontal assault on popular power in all areas of life.

In the age of austerity, governments around the world say they have no choice but to cut social assistance, pensions, public sector jobs, minimum wages and environmental assessment programs. We’re told that the masses are greedy and lazy and have been living beyond their means for too long. Now it’s time to get real about what’s affordable. For most people, that means having to accept less in terms of job security, workplace rights, support for migrant and indigenous communities, public health, social assistance, and other entitlements and protections won through working class struggles of the past.

In Greece, austerity policies will slash the minimum wage by more than 20 per cent, cut 150,000 public service jobs, and decimate pensions. In the UK, tuition rates have tripled and the government has announced plans to cut 490,000 public sector jobs, at the same time as it cuts taxes on the wealthy.

The full impact of the federal budget in Canada isn’t clear yet, but the Harper Conservatives have promised to raise the age at which people are entitled to receive Old Age Security, while cutting thousands of public sector jobs, rolling back environmental protections, and cutting funding to human rights organizations, the National Aboriginal Health Organization and the CBC. The Ontario Coalition Against Poverty (OCAP) has noted that the recent austerity budget in Ontario means “social assistance rates will be ‘frozen’, which in real terms means a cut in income once again.”

Workers don’t want to be fired, have their wages and social assistance cut, take on more unpaid labour, wait longer until retirement and lose the last remaining public services. Students don’t want their tuition raised. No one wants to be kicked out of their home. The sociologist Wolfgang Streeck has said that when people have the chance, “as they inevitably do in a working democracy – they tend in one way or another to insist on […] social commitments and obligations being protected from market pressures for ‘flexibility’; and on society honouring human expectations of a life outside the dictatorship of ever-fluctuating ‘market signals.’”

This is why politicians who serve the austerity agenda don’t like even the limited version of capitalist democracy that exists today. It’s why they’re working hard to bring in new ways of ruling that allow them to erode the minimal democracy that’s left within the official political system while leaving the official institutions in place.

That’s why in Greece, for example, the prime minister was forced to resign in late 2011 after merely raising the idea that unprecedented austerity policies be put to a national referendum. He was replaced by a non-elected ‘technocratic’ leader who was given the freedom to impose the demands of European ruling classes without even the formal trappings of public accountability. In fact, Greek politicians are being forced to rewrite the country’s constitution in order to prioritize debt repayment.

The Canadian government has repeatedly interfered with the collective bargaining process in the past year, blocking the right to strike of workers at Air Canada and Canada Post. The Harper government justifies this brutal attack on workers’ rights by rattling on about the ‘tough measures’ that have to be taken in these troubling economic times. This, of course, while the same government pumps billions into new prisons and killing machines.

The Ontario budget released late last month makes a complete mockery of the idea that governments are elected to implement the mandate given to them through popular elections. McGuinty has already undone virtually all of the promises he made during last fall’s election, and is currently preparing a major assault on public sector unions, including teachers’ unions, who McGuinty has been cozying up to for years. Again, the justification is familiar: we have no choice. The economy is in trouble and people need to get used to the new normal – a new world in which most people simply have to accept less.

Hundreds of thousands of students and their allies demonstrate against tuition hikes in Quebec, and the government says it doesn’t care. The parliamentary ethics officer finds a federal cabinet minister guilty of unethical behaviour and the government does nothing (except, of course, ratchet up its racist ‘tough on crime’ policies and deportation spree). The list goes on.

No wonder the robo-Conservatives have no trouble tampering with elections. At the start of the 21st century, the whole approach to democracy by governments around the world is weakening or eliminating even limited forms of popular power in order to usher in an age of austerity. No wonder, then, that the blunt anti-democratic character of robocall has generated such outrage. In this one crude case is crystallized a much more complex global trend in which governments and capitalists are aggressively redefining even faint expressions of democracy as problems.

Democracy – in the sense of genuine popular power – poses a threat to the austerity agenda. If it’s up to paid and unpaid workers and poor people to make collective decisions about the best way forward, it’s hard to believe they’d choose a course of action that sees their own living conditions eroded while wealthy corporations accumulate massive profits.

In the past few years there’s been a tremendous explosion of popular power against attacks on the working class: general strikes in Guadeloupe and Martinique, Egypt, Greece, Spain, and Portugal; massive student demonstrations in Chile, Quebec, and the UK; demonstrations against land seizure in China; and ongoing organizing by Occupy activists in all sorts of neighbourhoods and workplaces. This surge of popular power is a serious challenge to the austerity policies being rolled out through the institutions of ‘official’ democracy.

Anti-austerity movements have not yet grown to the scale or developed the levels of coordination required to halt the rampage of the ruling classes. But these movements do contain the seeds that could one day grow into a broad-based fight-back with the social power necessary not only to stop the austerity agenda but develop forms of collective self-government throughout all areas of life.

Governments and the capitalist class sense this. They understand that the flourishing of genuine democracy would mean the end of the austerity agenda. So they will do whatever they can to prevent anti-austerity movements from developing. When such movements do arise, they argue that people should go home and wait until the next election to express their dissent.

Strengthening Democracy from Below

Clearly democracy is under attack. Governments are narrowing or abandoning even the restricted forms of existing democracy, making it harder and harder for people to influence the brutal decisions made at the top. In this context, even an election without robocall black-ops is unlikely to change much. People can’t vote against austerity in most places – there’s simply no anti-austerity electoral option. At the federal level in Canada, all the major parties basically agree on what needs to be done; they just offer slightly different versions of how to do it. Being deprived of any serious political alternative at the ballot box is not exactly the same as being prevented from getting to the polling station in the first place. But it’s worth thinking about whether it’s altogether different. 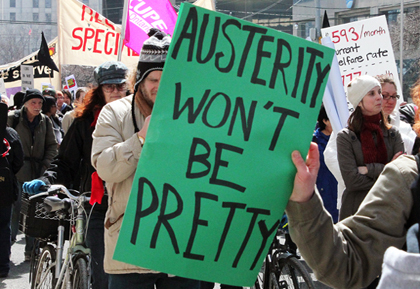 The only real way to defend democracy is to broaden and deepen it. This doesn’t mean romanticizing elections or existing democratic rights. The Canadian state is a settler-colonial, racist, patriarchal, capitalist state that has always primarily served the interests of employers and other privileged people both inside its borders and in other parts of the world. There are severe restrictions on what sort of change is possible within the terms of capitalist democracy.

But despite these limitations, the state remains an important site of struggle for feminist, anti-racist and working-class movements working to build new forms of democracy from below. And in these struggles, existing rights matter. Reproductive rights, the right to organize as workers, the right to health care and pensions, the rights of queer people, indigenous rights, the right to vote – these rights were won through mass collective action. Despite their contradictory character, they’re manifestations of popular power.

As such, they’re important not only because of their historical legacy and symbolic value, but because they serve as partial lines of defence against the relentless drive of governments and employers to aggressively exploit paid and unpaid working people. Even though these rights remain partial and aren’t universally accessible, their erosion is a serious problem. The loss of existing democratic rights is a win for the austerity agenda.

It’s true that political struggles seeking genuine social transformation can’t be confined to the sphere of parliamentary democracy. Building a new left with social weight will depend on a wide range of activism outside the parliamentary sphere: mass demonstrations, strikes, occupations, and other forms of direct action. But instead of concluding that the defence of existing democracy is a diversion from activism, we should be developing strategies for how to defend existing democratic rights in ways that could help to build mass militancy in order to resist the austerity agenda and push for freedom and social justice for all.

The angry public reaction to robocall is not totally misdirected. Nor does it only reflect illusions in parliamentary democracy. Instead, it should be interpreted as yet another sign of the growing frustrations people are feeling about how democracy in the age of austerity is under attack across the board.

Radicals need to develop new ways of reaching outside their circles, not only to provide resources to people trying to make sense of their own frustrations, but to learn from the experiences of people struggling under and against the austerity agenda. Taking seriously and learning from public anger over the erosion of existing democracy is part of what’s needed to build the sort of broad-based, pluralist anti-capitalist left capable of overturning the austerity agenda and transforming all areas of life through democracy from below. •

This article was first published on the New Socialist Webzine.

James Cairns is an Associate Professor in the Social and Environmental Justice; Program at Wilfred Laurier University and the author of numerous books including The Myth of the Age of Entitlement: Millennials, Austerity, and Hope (University of Toronto Press).