Ignoring is Denying: The Ontario 2020 Budget and the Climate Emergency

On November 4th the US officially withdrew from the Paris Accord. On November 5th the Ontario government tabled a budget that ignored the climate crisis and our Paris Agreement targets. The United State’s denial of the climate crisis will likely change with a Biden administration. Ontario’s denial will continue for the rest of the Ford Government’s term.

Ontario currently faces two serious and related health crisis. One is the COVID-19 pandemic and the other is the climate emergency. Both are deadly. For COVID-19, the hope is that in time there will be a vaccine. But there is no vaccine for climate catastrophe. The climate crisis can only be resolved by decisive, dramatic and effective government action.

As a response to the COVID crisis the Ontario budget was severely inadequate on many fronts. In responding to the climate crisis, it was criminally negligent. There are only two variables in combatting climate change. Time and decisive action. The Ontario conservative government has squandered the one and refuses the other. 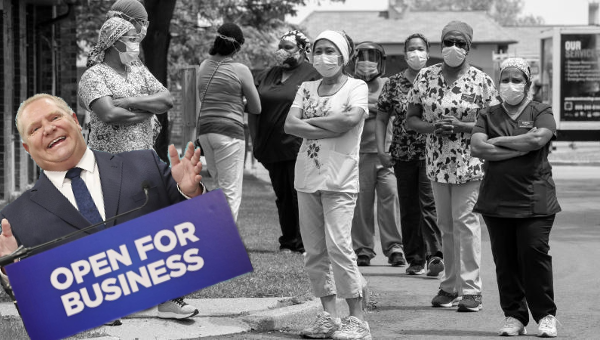 In 2018 The United Nations’ special panel of climate experts warned that “unprecedented change” over the next decade was necessary to prevent the worst consequences of climate change.

In 2019 the Ford government announced a plan to go it alone on climate action. It would realize the goal of a 30% reduction in greenhouse gas (GHG) emissions by 2030 over 2005 levels by targeting emission reductions across a range of activities. The Ford plan included the shift to electric cars, natural gas conservation programs, clean fuels, industry standards and something called “future innovation.”

In the same year the province’s Auditor General reviewed both the assumptions behind the Ford government’s emission calculations and the expected emission reductions. The report concludes that the claims were “not yet supported by sound evidence. The Ford government had underestimated the required emission reduction targets. It had exaggerated the results of its proposed initiatives. It had double counted the potential gains from various programs. And it had conjured away the huge remaining shortfall. All in all, a new version of climate denialism.

The Auditor General provides this example. The Ford plan estimated that by 2030 there would be 1.3 million electric cars on the road in Ontario. This figure represents more than a 3000% increase over the number of electric cars on the road in 2019 and would account for a sizeable share of emission reductions. In arriving at that number, the government included the surge in electric vehicle sales based on the subsidy program that Ford had already cancelled. The Auditor’s report calls them out. All in all, 2019 was another precious year for action that was lost.

In 2020 the Ford government is on track to completely miss its 2030 greenhouse gas emission reduction targets. The biggest reduction in carbon emissions in the government’s plan is to be achieved by Emission Performance Standards. These industry standards were originally estimated to account for over 15% of the overall 2030 reductions. They have been drastically revised downward. Instead of reducing GHG emissions by 2.7 megatonnes (Mt) the government now admits they will only achieve a 1 Mt carbon reduction. Once again, the government had exaggerated the results.

On November 5th, the Ford government tabled its 2020 budget entitled Ontario’s Action Plan: Protect, Support, Recover. Budgets are the mechanism by which governments establish priorities for action and commit the financial resources to achieve its goal.

The Ontario budget concludes that “one thing is crystal clear: now is the time to begin building the foundation for a strong economic recovery.” But in 239 pages there is no mention of climate action, no mention of clean energy, no mention of green jobs and only one cynical mention of a “greener economy.”

Under the heading of “Supporting a Green Economy” the budget states: “Ontario’s EPS (Emission Performance Requirements) will help the province achieve its share of Canada’s 2030 emission reduction targets while supporting economic growth.”

The government has admitted this initiative will scarcely make a dent in Ontario’s GHG emissions. And although it has absolutely nothing to do with a green economy it is the budget’s only reference to a green economy.

Around the world there are two different approaches to government efforts to build a post-COVID economic recovery. Some governments see the post COVID recovery as a chance to address the climate crisis and build the foundation for a green economic future. For other governments it is business-as-usual.

The Ford government is the embodiment of the business-as-usual approach. The budget provides the same old and failed conservative economic nostrums of gutting regulations, tax breaks to business, and the transfer of money from Ontario families to corporations. “Ontario is open for business” is sounding more desperate than ever.

The budget announced a new initiative that will exempt 90% of employers from paying the Employer Health Tax. The cost is $360-million a year. The budget announced that it is giving corporations a permanent break on the education component of property tax. This year alone that will cost $450-million. In one of its the most cynical moves the government announced that it is subsidizing the electricity costs for extractive and heavy industries. Over the next three years Ontario families will have to pay $1.3-billion to subsidize these industries.

In the next year alone, the budget will squander hundreds of millions of dollars of our money, that could have been used to support resiliency measures and climate solutions.

Some governments use the language of ‘climate emergency’ to compel or, at least encourage, immediate action. Others like the federal government, in its latest throne speech, uses the more neutral language of ‘climate change’ to dampen the need to act. And then there is the Ontario government. In the budget there is not one mention of the climate emergency. Nowhere in the budget does the government talk about the climate crisis. Even the phrase ‘climate change’ is avoided.

Budgets are about choices. What a government chooses to do and what it chooses not to do. The Ontario budget repeatedly and thoroughly, on big issues and small ones, across every policy and portfolio adamantly refuses to respond to the climate crisis.

Here are some examples:

The budget announced a range of supports over a wide range of industries. But there is no support in the budget for new and emerging green industries. Clean energy, high speed rail, electric transit vehicles, locally based ecological agriculture, retrofitting public buildings and all the other building blocks for a sustainable economy are nowhere to be seen.

The post COVID recovery has to be a clean energy and green jobs recovery. But not in Ontario. And that has serious consequences.

Every five years, signatories to the Paris Accord have to revise their national commitments to curb greenhouse gas emissions by the target date of 2030. By the end of this year Canada will have to strengthen its Nationally Determined Contributions (NDCs). Ontario, which is responsible for about 23% of Canada’s GHG emissions, has made it highly unlikely that the existing targets could be achieved. The 2020 Ontario budget is sabotaging any efforts to strengthen those commitments.

A year from this November, the UN climate summit (COP26) will be convened in Glasgow Scotland. Many see this as a make or break event for the planet. The moment the world will have to turn guidelines into action, and promises into fact.

The 2020 Ontario budget has already squandered the year that will lead up to that crucial event. It will skew our climate more rapidly toward a series of cascading disasters.

There are only 72 Conservative MPPs in the Ontario Legislature. Their refusal to act on the climate crisis jeopardizes so much. Their inaction is a crime against our future. •

David Robertson is the former Director of Workplace Organization and Training for the Canadian Auto Workers (now UNIFOR) and co-author of Just Another Car Factory? Lean Production and Its Discontents.