Poland: Revolution in Times of the Pandemic

Poland is a largely Catholic country, which is transforming into a secular society, based on human rights and gender equality. The general obedience and indifference to even the most outrageous actions of the government has now been replaced by a more conscious civil participation. A society that has lay passive under a neoliberal spell is now taking a giant step toward a more democratic state. 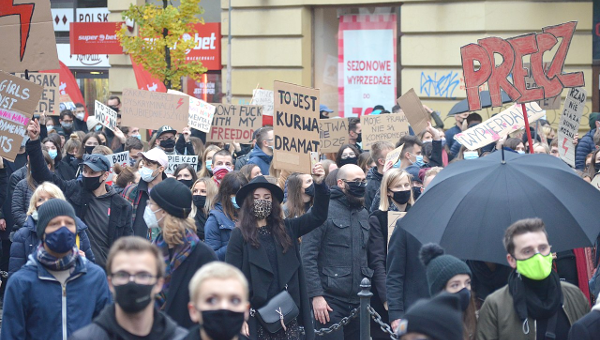 Poland stands on the verge of a humanitarian catastrophe. Hospitals are overflowing and in many places doctors have started triage as ventilators become scarce. Non-Covid patients need to wait for treatment, leading to October’s general death rate being the highest since World War Two. Poland now has the 15th largest number of infections in the world, over 750,000 cases. However, it still remains on 23rd place with regards the number of deaths – almost 11,000 (19 November), due to the effectiveness of the spring lockdown. However, this lockdown was brought to an abrupt end before the president elections in July and the government has been unwilling to shut down the economy again, even as the infection numbers are soaring.

In this bleak context, Poland is living through one of the most energetic periods in its post-war existence. Since 22 October, protestors have gathered almost every day to express their dissatisfaction on a wide range of issues: from the abortion ban to the illegitimacy of the government, with the omni-relevant “Get The Fuck Out” becoming the unofficial slogan of the movement. At its peak, there were more than 800,000 people on the streets, in a record breaking 534 cities and towns around the entire country. The ‘Black Protests’ from 2016, which were the first to mobilize so many people in so many places, now look almost modest in comparison.

On the streets, teenagers have demonstrated alongside veterans from the Solidarity movement, with women protesting arm in arm with men. In some places, the protests even seemed to be competing for attendance. For instance, in Szczecin, in the North-West of Poland, the organizers scheduled an old-fashioned picket in the afternoon and a rave in the evening, only to face outrage from some of the attendants due to the events overlapping.

The protest’s focus has shifted. The Constitutional Court’s ruling on the subject of pregnancy termination in case of fetus malformation sparked the protests on Thursday, 22 October. However, it quickly became obvious that the government’s hard right course over the last five years had generated enough latent anger to fuel the protests for weeks. The All-Poland Women’s Strike, a semi-formal association of women’s protest organizers from various regions, has established 13 main areas of concern. Women’s and LGBTQ+ rights are at the top of the list, followed by declarations on laicity, the rule of law, repairing institutions, climate action, labour rights, education reform, freedom of the media and proactivity in fighting the pandemic. The Strike also denounced the looming threat of neo-fascism in public life, as well as a deep crisis in psychiatric care.

A State Made of Cardboard

A running joke, dating back before the PiS election victory in 2015, is that Poland is a cardboard state, which only looks real from afar. The pandemic has proven that this joke is bitterly true. The government seem to have spent all its reserves on implementing the spring lockdown. Back then, with scheduled presidential elections and the conservative incumbent expected to win his second term, the ruling party did not introduce a state of emergency for sanitary reasons as it would have affected the election dates and dampened Duda’s chances for re-election. Now, the main argument against introducing emergency measures seems to be the state budget. However, appearances needed to be maintained. Tightening the abortion ban, was a surefire way to spark unrest, and was probably used as a means to divert attention away from the government’s failings and to lay the blame for an ever increasing infection rate on feminists.

Yet another headache is the “Independence March” which is held yearly on 11 November to commemorate the anniversary of the end of the First World War and Poland regaining national independence. The march traditionally gathers the most radical right forces in Poland, alongside neo-fascist groups from neighbouring countries and hooligans. It has grown in size over the years and since 2011 has repeatedly proven to be uncontrollable by the state forces, which have been unwilling to confront the demonstrators. As a “cyclic gathering,” the March falls into a special legal category which usually translates into a privileged position. However, it also opens a possibility for the local government to ban the gathering for vis maior (superior force) reasons. While government’s banning of public gatherings would mean, for the PiS party, declaring war against radical right groups and alienating the right fringes of the majority, the Warsaw city hall had no such reservation and banned the Independence March on sanitary grounds. The March was then announced to be transformed into a motorcade but despite the organizers’ appeals, several thousand right-wingers appeared on foot and ready for action. The March turned into a riot and resulted in a couple dozen injured. A stray flare, aimed at a balcony with a rainbow flag and a large Women’s Strike poster, set fire to a neighbouring flat. Ultimately, these riots have further exacerbated anti-nationalist sentiment among the population.

The Victory Will Not Be Legal

The main focus of the protests remains the Constitutional Court ruling K1/20, banning the possibility of terminating pregnancies with malformed or otherwise unviable fetuses. Constitutional Court rulings in the Polish legal system remain irreversible, as the Court itself serves as the final voice in legislative issues. After its victory in 2015, the Law and Justice (PiS; European affiliation: ECR) government proceeded to replace as many Constitutional Judges as they could, invalidating several elections of not-yet sworn in judges and replacing them with their own candidates in an even more outrageous way than Republicans in the USA have done through pushing the candidature of Amy Coney Barrett. Due to the government’s efforts and largely dissatisfying rulings, the Constitutional Court of 2020 is perceived as a party stronghold and its rulings, as a voice of the governing party.

The motion to suppress abortion in case of fetal malformation has been yet another push to tighten up the abortion ban in place since 1993. The 1993 law, hailed as an ‘abortion compromise’, allowed for only three exceptions to the general abortion ban: in cases of pregnancies resulting from rape or incest, pregnancies causing grave danger to a woman’s life and health and in case of the fetus malformation.

All three exceptions remained mostly disrespected. For one, it is nearly impossible to obtain proof of rape in time to perform a pregnancy termination. Secondly, over the years, several women have died due to delayed or manipulated diagnoses stemming from doctors’ unwillingness to abort. The most well-known cases are Agata Lamczak who died of untreated intestine inflammation and Alicja Tysiąc who became blind after doctors refused to recognise the risk and terminate the pregnancy. The malformation of the fetus remained the most common cause to abort in Poland, with several hundred procedures performed annually. However, access to prenatal testing became increasingly difficult and the tests were often scheduled too late for the legal window to abort.

Polish President Andrzej Duda tried to placate the protesters by proposing a law to reinstate the third exception in a different wording. His desperate attempts dubbed a ‘compromise to a compromise’ satisfied no-one, leaving the demonstrators even more angry and almost causing a rupture within the conservative majority. For now, the K1/20 ruling remains unpublished and as such it has not yet become law. However, hospital lawyers reasonably argue that with the ruling due to be published at any time, the hospitals need to already start cancelling scheduled terminations. For now, the only way out of the unpopular changes will be to change the government and the entire legal system with it.

For the protest leaders, giving up does not seem to be an option. The protests are now less numerous but more ferocious and are organized in unexpected places like Otwock, a conservative town near Warsaw, or Zakopane, a tourist destination in the mountains which is known for having exceptionally high rates of domestic violence. This may be a revolution comparable to May 1968 in the West, in which Poland never took part. •

This article first published on the Transform Europe website.

Agata Czarnacka is a political philosopher, militant feminist and writer. She works as an expert advisor for social movements, parties and international organizations such as Amnesty International, MamaCash Fund and the Rosa-Luxemburg-Stiftung.