Havana Once Again Under Quarantine

Last month The Bullet published a report on Cuba’s remarkable success in meeting the threat of COVID-19, “Cuba in the Last Stretch of the Pandemic.” At the time there was good reason to accept Fernando Ravsberg’s assessment that Cuba had successfully met the challenge, that the worst was over and that the mop-up operation then under way would limit the virus’s impact on the island’s population even further.

But events have taken a different course, as Ravsberg explains in the article below. Taking advantage of human errors, the virus has punched through the weak spots in the nation’s defenses, particularly in and around the capital region. The article here is an update, and should be read together with the earlier one, which contains a good deal of information about the unique strategy that Cuba developed to protect its population. Cuba continues to rely on the same strategy in this new phase of the struggle against the pandemic.

This report by Ravsberg first appeared on the Salvadorian digital daily news site ContraPunto on August 10. The translation from the Spanish is by The Bullet.

Writing here two weeks after Ravsberg’s article appeared, it is possible to provide some more current data. On August 22 the Cuban Ministry of Health reported that as of that date the COVID-19 virus had killed 91 Cubans; it had infected 3,682 others. In the course of the previous week more than 300 new cases of infection were uncovered (most were asymptomatic) and three deaths were recorded. The data also demonstrate that the virus is continuing to spread, including to other regions. The difficult struggle is far from over. 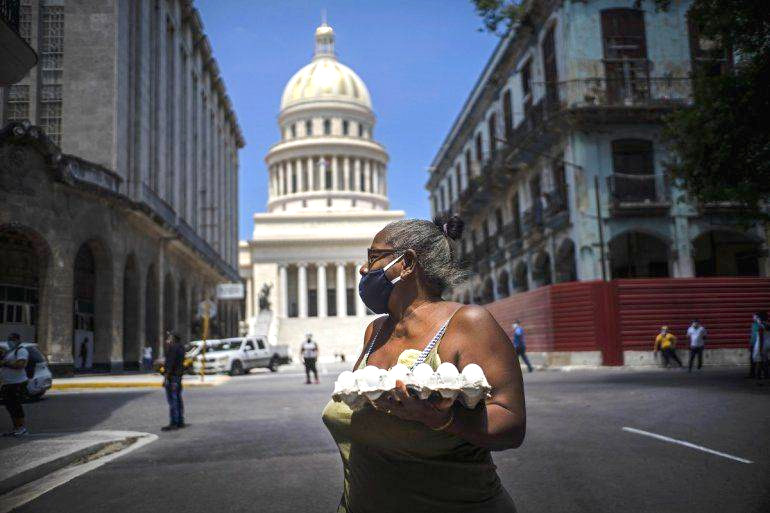 A new state of emergency has been declared for the adjacent Cuban provinces of Havana and Artemisa, returning them to the situation they were in at the beginning of the pandemic. Transportation to and from other regions has been halted. All buses and taxis, both government-owned and private, will now be used only to transport essential workers to and from their workplaces. These include public health facilities, food stores, production of consumer goods or products for export, etc. All bars and nightclubs have been shuttered once again. Restaurants will only be allowed to sell food for takeout or for home delivery. Cuban tourists from either Artemisa or Havana who vacation at beaches in other provinces, for example in Varadero, will have to provide their hotel with proof that they have passed a COVID-19 test within the previous 48 hours.

Until recently, Cuba had managed to flatten the curve of the spread of the virus to a minimum, finally reaching a day when no new cases were discovered. As a result, awareness of the risk of transmission declined. The authorities allowed public transportation to resume. They allowed restaurants, bars and even nightclubs to reopen. One consequence was that in a single bar dozens of people from different neighborhoods of the capital were infected. Dr. Carlos Alberto Martínez, Havana’s health director, noted that these are places where people “act irresponsibly and where they violate public health rules,” he explained. As well, Cubans flocked to the beaches and many parties took place in the neighborhoods. After four months of musical abstinence, Cubans desperately needed to celebrate. The clarion call was given at a religious festival in the town of Bauta, in the province of Artemisa, a few kilometers from Havana. Sixty-four people were infected there. Some were locals but others came from Havana, where they infected others when they returned.

However, the irresponsibility of ordinary people was not the worst mistake that was made.
The relaxation of security and control measures extended to work centers, leading to major outbreaks in some of them. As Dr. Martínez put it, “the institutional events [that is, transmission of the virus at large workplaces] are what have created a more complex epidemiological situation.” One of the most serious incidents of contagion occurred at a construction company in the Mariel duty-free zone, where 30 people were infected. The problem in such cases is all the more serious because the Cuban strategy for fighting the virus consists of tracking down every contact of each infected person, isolating all contacts as suspected carriers of the virus, and testing them. More than 3,000 contacts were identified in the case of the Mariel construction company. Contact tracing and isolation is a very effective strategy, but it is enormously expensive. Today there are almost 7,000 people who are under close observation.

Moreover, in theory each work center should be checking everyone’s temperature and have health personnel and disinfectants at hand. Masks should be mandatory and no one showing respiratory symptoms of any kind should be allowed to enter the building. But these safeguards were relaxed to the extent that the reduction in the number of infections led people to think that the pandemic had been definitively defeated. The new outbreak of the virus has brought them back to reality with numbers that don’t lie. During the last 15 days, 181 new cases were detected, compared to 83 in the previous fortnight. In Havana alone, 31 separate sources of infection were discovered, spread over 10 municipalities. Thus, the incidence of contagion has tripled, from 2.8 per 100,000 inhabitants to 8.5. •

Born in Uruguay, Fernando Ravsberg spent 22 years as an international correspondent for the BBC's Latin American service. He lives in Havana with his Cuban-born wife and children. He is active on Facebook