Thinking a socialist future implies imagining what this future might look like, and then asking how we can get there. Utopia, as conceived by revolutionary theory, implies a pragmatic aspect relating to the question of transition. Transition is a challenge. History has shown that it is not linear: no direct path leading from one point to another exists. Instead, we need to consider transition as a process. Feminist body politics aimed at dismantling rigid norms of gender and sexuality show that revolutions take time. The temporal space created by this, however, opens up a field for exploration and experimentation, a terrain on which contradictory forces clash. Is it possible to walk such a transitional path without knowing where it will lead? 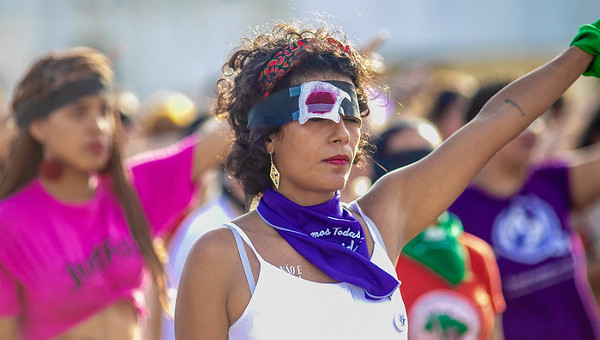 The struggles now unfolding in Chile and across the globe against neoliberal privatization, the destruction of welfare provisions, and the progressive commodification of our lives stand in a largely inverse relation to such a revolutionary temporality. Their project is less future-orientated than it is invested in defending something lost or something perceived as under threat. These are struggles for the commons, struggles to confront ongoing dispossession, or demanding the return of stolen wealth: struggles showing that our utopias need foundations to turn into a reality. We need functioning structures of care and self-care to find the energy to fight in the first place.

Should this lead us to conclude that these struggles are more conservative, or backward-looking than they are utopian? No. They entail a utopian thrust in their knowledge of the conditions from which they initiate transformation. For this reason, these are now decisive and indispensible struggles. Taking self-defence as a starting point, they spawn the possibility of something new; they bring to light something that has not existed. They found this political movement on a temporality that is not nostalgic or archaic, but directed toward producing the present. We can see that revolutionary desire requires a solid infrastructure to come to fruition.

Rosa Luxemburg coined the concept of a revolutionary Realpolitik to grasp transition with greater precision, as a process in which day-to-day struggles for concrete improvements take place against the horizon of a radical reorganization of society, and in which struggles in the here and now, in grassroots politics, pave the way for the steps to follow. The teleology of an ultimate revolutionary “goal” shifts. Not because it no longer exists or loses importance, but because the temporal relation to everyday politics has changed. We can and must question every act, whether it is imbued with revolutionary dynamism or not.

We Want to Change Everything!

I consider this concept helpful for sharpening the revolutionary perspective of current feminisms. What are their goals? What utopian energies do they unleash? To what extent can we see them as a revolutionary realpolitik of the future even when they do not have a stable idea of what their goal is? In what way, do they revolutionize the present and create the conditions for a different future?

In their determination and radical nature, contemporary feminisms are initiating radical breaks – in our bodies, on the streets, in bed, and in the household. The slogan of the feminist movement in Argentina sums them up: “We want to change everything!” With the most recent revolts in Chile, this claim has been further sharpened, with the feminist revolution positing that “We have a programme: We want everything!” There is no space, no social relations that remain untouched by this dynamic of rupture and revolt. The time of revolution lies in the here and now, its energized force linking it to the perspective of a liberated future.

From its origins in Latin America, the energy of the transnational feminist strike has spread to over 50 countries. In Chile, the masses have taken up many of the slogans and practices of the feminist strike and have assumed even greater force as a plurinational general strike. The experience gained in various movements over recent years has made it possible to change even the way we struggle, the organizational forms, the political perspectives, and the historical alliances. In this context, two central mechanisms of domination are being attacked: the burden of debt being placed on subaltern subjects, and the expropriation this brings with it, both of which have rendered impossible a self-determined future for large parts of the population.

As a financial obligation, debt colonizes our future. It chains us to exploitation with a tightly-knit dispositif of moralizing admonishment and individualization. Conservative neoliberalism has thoroughly recolonized Latin America financially. These are the conditions under which an indebted, and thus highly disciplined, younger generation has grown up, its lack of independence intensified by the centrality of the hetero-patriarchal family. The struggle against debt is about re-appropriating our future and making it our own, creatively shaping it on an individual and a collective level, and finding new subjectivities that can escape such a “debt relation.”

The graffiti and slogans of the Chilean protests express this all. On the facades of banks in Chile, home of the Chicago Boys and the highest per capita debt in the entire region, it says: “They owe us a life.” This statement reverses the question of who owes what to whom. Considering surging living costs, or, to be more precise, counting the progressive extraction of value from daily practices of social reproduction, this slogan points to the possibility of financial disobedience – the #EvasionMasiva movement is a prime example.

Current feminist movements go even further, formulating a concrete and pointed critique of the multiple and new forms of predatory exploitation by which capital reaches ever further into our lives. Bodies are fighting shoulder to shoulder on many fronts: those of household debt and precarization, neo-extractivism and the devastation and desertion of entire regions, militarization and the criminalization of borders, and scapegoating “internal enemies.”

“Feminist revolution creates a site of political antagonism by fighting for the means of the production of life.”

These are struggles that question the role of property. In doing so, the feminist revolution creates a site of political antagonism by fighting for means of producing life wherever neoliberal exploitation takes root. In this respect, feminism as a quotidian revolution is significant, because it poses the question of whether the sites at which the accumulation of capital is opposed might determine the direction of transformation.

Today, even the bodies of young people are sites of contestation where capital is attempting to expand its value creation, to mould them into obedient workers who obediently accept precarization, debt, and the nuclear family – even if the latter is imploding and brimming with violence. In these bodies, the feminist revolution has planted the desire for revolution, the promise of a future not regulated by capital – opening up the concrete production of utopia. •

This article first published on the Zeitschrift LuXemburg website.

Verónica Gago teaches political theory, economy and sociology at the Universities of Buenos Aires and San Martín in Argentina. She was a member of the activist-research collective Situaciones, she is active at NiUnaMenos and in the movement for an international feminist strike. Her publications include Neoliberalism from Below: Popular Pragmatics and Baroque Economies (2017) and Feminist Revolution (2020).