International Aid to Lebanon Must Not Enforce Neoliberalism

As activists in the international CADTM network we were deeply moved when hearing of the disastrous explosions that hit Beirut on Tuesday 4 August. In this press release we want to convey our solidarity to the Lebanese people who, for too many years, have had to suffer an unfair concatenation of murderous crises. We think that it is also important to expose political responsibilities and those who attempt to profit from the situation; it is even more important to try to find how the country can escape this vicious cycle. 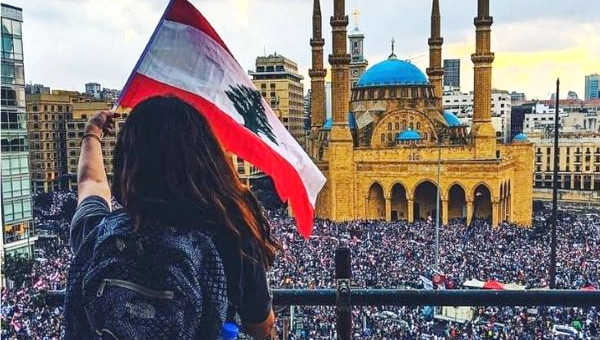 It will take time to establish the truth about the specific causes of the explosion of 2,750 tons of ammonium nitrate in Beirut harbour in the early evening of 4 August, if it can ever be determined. However, what is evidenced by this catastrophe – which caused at least 158 deaths and over 6,000 injuries – is the extent to which the Lebanese State had abdicated its responsibilities. The country’s Prime Minister mentioned a case of negligence. That negligence, which was literally a crime, is first and foremost that of the government and its administration, gangrened as it is by cronyism and corruption. The previous governments since the end of the civil war (many have been in positions of power since then), and of course the various parties and militias, are also responsible. That Lebanon is sick and that the local political leaders are heavily responsible is obvious to everyone. But that responsibility is shared with regional and global leaders, international financial institutions (the International Monetary Fund and the World Bank) and private banks.

This catastrophe in early August has to be seen first of all in the context of the intense economic crisis the country has been in for several months. And that crisis itself must be seen in the context of a political situation that has been problematic for several decades. Lebanon is a magnificent country with a centuries-old history at the frontiers between several cultures and religions. This cultural and religious diversity is, as it is everywhere, a source of enormous cultural and social richness. That mixture and diversity of ethnic and religious groups is often exploited and amplified in political competition among the powers in place. The civil war that tore the country apart between 1975 and 1990 is an example. The end of the civil war has not meant an end to the international powers’ habitual attempts to profit from the inter-religious tensions. It is not oversimplifying to say that, historically, Saudi Arabia and its allies (and the USA behind them) and to a lesser degree Turkey have supported the Sunnite parties, Iran and Syria the Shiite parties (first and foremost the famous Hezbollah) and France (and more discreetly Israel) the Christian parties. Each power supports and uses these political forces to further its interests in a region that is geopolitically and economically strategic.

In Lebanon, this organization on the basis of religion defines the country’s political life. Voters can only vote for candidates who share their religion (actual or assumed by birth) – not in the voter’s place of residence but in his or her birthplace. This system has encouraged the development of a system of structural clientelism of enormous proportions. So enormous, in fact, that it is no exaggeration to say that the political class in Lebanon essentially works more or less exclusively and openly in its own interests with barely any regard for the population, which is left to shift for itself in most areas of daily life: the provision of electrical power is chaotic; management of bus services in Beirut is left either to the various militias or to private individuals with mini-buses; waste (non-)management was at the origin of major demonstrations in 2015; communications are unaffordable; projects to build a railway line linking the country’s South and North are postponed endlessly despite permanent congestion of the motorways and the fact that the plans have long been drawn up. As for public contracts and the government administration, the standard is political cronyism and nepotism. It goes without saying that in such a context, “good management of public funds” is a concept that exists only in the pronouncements of politicians. Public monies serve above all to enrich officials and further swell the large private fortunes. The Beirut city centre, around la Place de l’Etoile, with its empty buildings built with State subsidies that serve no purpose but real-estate speculation, is the perfect symbol of this collusion of interests between those who hold public and private power.

The popular protest movement in Lebanon began on 17 October 2019 and challenged that entire system of inequalities, demanding the departure of the entire ruling class, the sentencing of corrupt officials and the organization of an economy based on social justice. It has always endeavoured to remain in the streets in spite of repression and the exceptional public-health situation related to COVID 19. The protest movement denounces confessionalism and the dictatorship of the banks. The movement has resumed after the catastrophe of 4 August 2020.

The country that was once known as “the Switzerland of the Middle East” has based its economy on the financial sector to the detriment of the productive sectors. The country has long had a large balance-of-trade deficit (which undermines food sovereignty) and the economy depends heavily on the dollars sent by the immense Lebanese diaspora around the world ($8-billion in 2018). The banking sector has built a veritable Ponzi pyramid on those funds. With cash sent by the diaspora, the private banks buy national-debt securities denominated in Lebanese pounds at the highly advantageous interest rates granted by the Bank of Lebanon (BDL), which used the system to finance public budgets that were essentially squandered by the governments, as described above.

This system of financing the State through and for private finance has led to the accumulation of an unsustainable public debt that in 2019 amounted to 170% of GDP (with nearly 40% of the debt denominated in dollars). This pyramid had begun to crumble little by little due to the slowdown in the flow of dollars caused by the war in Syria and the fracture of the financial system worldwide, as well as capital flight organized by the country’s wealthiest citizens. It ultimately collapsed totally with the economic and financial crisis that accompanied the Coronavirus, although the socio-economic consequences were already considerable (a few months ago it was estimated that approximately a third of the population was living on less than $4 per day and that unemployment was at around 25%, and as high as 37% if the population under age 25 is counted). The Lebanese people have now been stripped of their savings and their pensions and the State is incapable of financing anything, not even repayment of its debt (the country is in payment default for the Eurobonds that reached maturity in March 2020, which has only accentuated the suffocation of the banking system).

With the economic and humanitarian crisis reaching levels never before experienced in the country, even during the civil war and the Israeli bombardments, once again it is international politics that has impeded the arrival of aid from abroad. Most political parties have been weakened as a result of the popular protests and only Hezbollah, using its dominant position as the country’s most heavily armed militia to harass the demonstrators, had managed to maintain power. That being the case, it was out of the question for the USA, Saudi Arabia, Turkey and Israel, but also France and the rest of the EU, to provide aid for the country in that context. On the contrary, the USA has attempted to take advantage of the crisis to apply maximum pressure on Hezbollah by depriving it (along with the rest of the country) of cash with the goal of handicapping Iran’s strategy in the region. As for Iran, it was in a difficult position itself because of the economic repercussions of the tightened US blockade and the Coronavirus disease, which has hit the country hard, and was not in a position to provide adequate aid. After decades during which the world powers used Lebanon for their own interests, they are now abandoning the country at the worst possible time.

It is in this context that the World Bank granted an initial loan of $120-million in April to the Lebanese State for financing its health expenditures. The IMF, always quick to react in this type of situation, has also posed as the saviour of the Lebanese by offering the government a loan of $10-billion. Of course, as is traditional for the Bretton Woods institution, that offer of cash was accompanied by a Structural Adjustment Plan (SAP) – in other words, a package of “reforms” to even further liberalize an economy that is already extremely financialized.

Since 4 August, facing the real cataclysm that struck the people of Beirut and quite logically moved the peoples of the rest of the world, governments around the world have been promising humanitarian aid. The French president even went to the city to make an openly neo-colonialist pronouncement to the population of the former French protectorate, who demanded that he withdraw support for the political elites supported by France. While the explosion of 4 August of course affected the inhabitants of Beirut first, all Lebanon’s people will also suffer its consequences. The city’s port – the country’s main trading port (60% of all imports, including 85% of all imported grain) in a country whose land borders have been cut off by the war in Syria and the conflict with Israel – was destroyed, along with a large part of the financial district. As a result Lebanon’s entire economy is prostrate. At a time when the people had already lost their savings and their pensions in the face of a skyrocketing cost of living, 250,000 persons are now homeless and millions will be deprived of income.

And we must not forget that Lebanon is a country where 1 in 4 inhabitants is a refugee. Although the data are not exact, it is estimated that along with 4.5 million Lebanese people there are more than 1.5 million Syrian and more than 500,000 Palestinian refugees, to speak only of the most important groups. We must also consider the huge number of migrants living in the country, working in appalling conditions, particularly domestic workers. All these people will be hit even harder by the current crisis.

It is therefore clear that international aid is indispensable, both to deal with the humanitarian emergency and to reconstruct in the middle and long term. It is also abundantly clear that local power can no longer be held by those who are responsible for this disaster but must be returned to the population, which must be able to manage the country’s institutions in the common interest. The aid must be genuine, and for that to happen it must take the form of donations, medical and food support and provision of logistics expertise (in particular for rebuilding the port, the hospitals and essential infrastructures) and not loans. And the major reforms (demanded by the popular movements) that are indispensable for the country must be of a nature to enable democratic, efficient management of the country, and not the kind proposed (with renewed insistence) by the IMF, which will lead to an even greater increase in economic inequalities and an economy that will remain dependent on finance, as systematically happens in all countries that are subjected to SAPs.

We therefore call for a genuine international aid in the form of grants and a complete cancellation of Lebanon’s debt, and not new loans that will further prevent the country’s reconstruction in the long term. •

The Committee for the Cancellation of the Third World Debt (the CADTM - Comité pour l’annulation de la dette du Tiers Monde) is an international network of individuals and local committees from across Europe and Latin America, Africa and Asia. It was founded in Belgium on 15th March 1990.