On the Eviction of 450 families from Quilombo Campo Grande, Brazil

During the second week of August in Brazil, the ruthlessness of state violence by the government of President Jair Bolsonaro was on full display against the Quilombo Campo Grande community established by the Movimento dos Trabalhadores Rurais Sem Terra (MST), the landless workers movement of Brazil. After sixty hours of resistance against the military police, the community had to retreat from what they had built. Noam Chomsky and Vijay Prashad wrote a message of solidarity to the families of the community below. 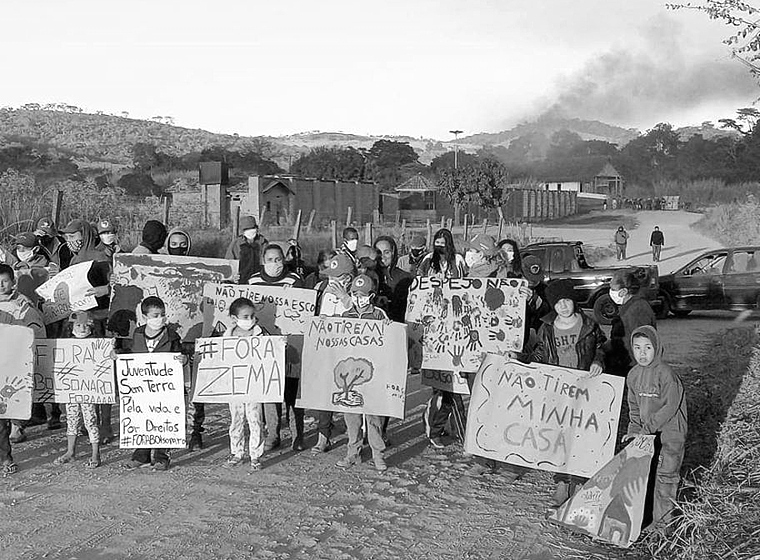 On 12 August, Governor Romeu Zema of Minas Gerais sent in the military police to evict 450 families from the twenty two-year old Quilombo Campo Grande. For three days they surrounded the camp, intimidating families, in an attempt to force them to leave their land, but the landless families resisted. On 14 August, using tear gas and sound grenades, they were finally successful. They destroyed a community that had built homes and grew organic crops (including coffee, sold as Café Guaîi). In 1996, the families, organized by the Landless Workers Movement (MST), had taken over an abandoned sugar plantation (Ariadnopolis, which was owned by the Azevedo Brothers Agricultural Company). Jodil Agricultural Holdings, one of Brazil’s largest coffee producers, owned by João Faria da Silva, wanted the eviction so that it could take over production from the cooperative.

As a sign of disregard, the Governor and the military police destroyed the Eduardo Galeano Popular School, which educated children and adults. As friends of Eduardo Galeano (1940-2015), the conscience of South America, we are especially pained by the eviction and the destruction.

This eviction took place a few days after the death of Bishop Pedro Casaldáliga (1928-2020), whose life was a tribute to the struggles for the emancipation of the poor. This eviction is an insult to his memory, the man who sang:

I believe in the International
of heads held high,
of speaking as equal to equal,
and of hands linked together.

That is the way to live, hands linked together, not through tear gas and bullets fired at the peasantry by the military police.