Just a few hours before the J31 Fare Strike convened at Grand Central Station, I had the opportunity to speak with Mayor de Blasio as a call-in to the Brian Lehrer Show on WNYC. I alerted the Mayor to the fare strike taking place that day, scheduled by various NYC transit advocacy groups in reaction to the 500 new Metropolitan Transportation Authority (MTA) officers Gov. Cuomo and ex-NYCTA Pres. Byford approved to monitor the subways. I mentioned that both parties publicly admitted that the purpose of the officers is not public safety, but instead to issue fines as a means of lost revenue recuperation. These officers are being deployed at a cost of $250-million over three years, or as I said, at least 2.5 million fare-evasion tickets.

Being that de Blasio has touted himself as being against over-policing and the criminalization of poverty, I asked how he could allow this to happen in his city? I continued to press him on whether he would support a fare-free system, which studies have shown can lead to better funding of mass transit budgets. 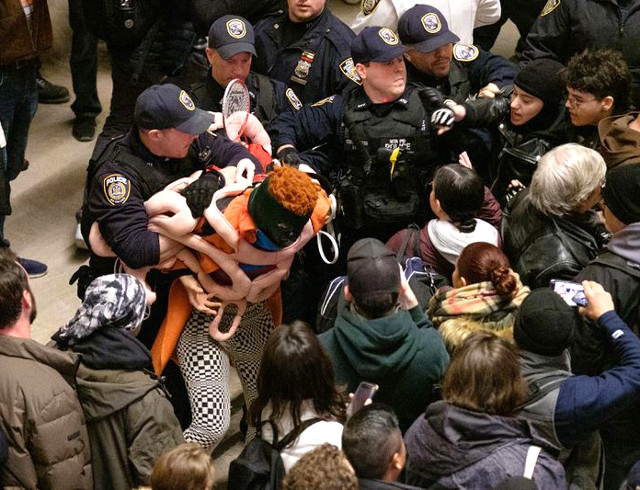 The Mayor provided a very politically pat answer. To the point of a fare-free system, he responded that it was an interesting idea but he struggles to understand the logistics. To the issue of the 500 new MTA officers whose purpose is to penalize the impoverished without even a pretense of safety, he commented that the MTA officers would have to go through the NYPD’s community policing training programs. I’ll speak to the aforementioned logistics later, but as a first-hand witness to the NYPD’s community policing tactics last night, I’d like to begin there.

Upon arrival at Grand Central Station, there were groups of NYPD officers holding semi-automatic rifles and German shepherds on the platform. I was carrying a protest sign and could feel their eyes affixed on me. I was terrified on account of being alone, if they were to accost me there would be no witnesses. Fortunately, I quickly ran into friends. We entered the main concourse and joined the mass of protesters who assembled in the center surrounded by police. My friends were carrying a badminton set with them and began setting it up as a way to exercise joy in defiance of the scare tactics demonstrated by the police. Within seconds we were bum-rushed by dozens of NYPD officers. Two of us were literally picked off the ground by the police and immediately arrested, no questions, no warning. Legal-aid volunteers pushed forward to the defense of my friends, and I witnessed NYPD officers body check them so that the volunteers weren’t able to follow.

Over the next two hours I witnessed cops tackling non-violent protesters, I witnessed a man cuffed with his hands behind him get punched in the back of the head by a cop, I witnessed an officer press a man’s head to the floor using his boot, and I overheard many cops with their fingers on their gun holsters joking with each other about teaching everyone a lesson. These are the community policing techniques the Mayor believes I should feel rest assured the MTA is following?

This will likely fly over the heads of everyone at the State, the City, the MTA, and the NYPD, but it was them, not us, who escalated first. The 500 new officers is an act of aggression. Unarmed protesters were met by haughty officers carrying weapons and riot gear. The protesters reacted in a show of resistance to the MTA’s and NYPD’s show of force. The 1,500 additional armed officers deployed that day to monitor stations in order to “maintain peace” were blatantly inciting violence. Preparing for disorder is a self fulfilling action.

One of the reasons the original FTP coalition protest was held was in reaction to six instances where African-American teens were physically assaulted by NYPD officers over fare-evasion. About two years ago the Mayor’s office announced an order to the NYPD to discontinue arrests for fare-evasion and other minor infractions, and to not engage in the use of force while issuing infractions. I was disappointed to receive such a flat answer from Mayor deBlasio considering that the State and MTA are undoing a good measure which he once proudly enacted.

The Transit Adjudication Bureau released data that shows 89% of those arrested for fare-evasion are black or Latino. After being pressured to do so by a lawsuit, the NYPD finally released data proving that they target less affluent communities of color for fare-evasion. If the supposed purpose of an increased police presence is to promote safety and prevent crime, then why are these officers hiding until they can issue tickets or make arrests? Why are they wearing plain clothes? Why are they peaking from behind doors and pillars? Why are they monitoring cameras and not patrolling stations? Shouldn’t the purpose of a police force be more than penalization? Who does this protect and who does this serve?

When I reconvened with my friends after they had been released with court summonses, they had lacerations on their wrists from the zip tie riot cuffs being placed on too tightly. They had been transported without seat belts, their hands tied behind their backs, on an MTA bus to the 103rd Precinct in Jamaica – a 13 mile multi-borough trip from where they had been arrested. This raises an unsettling question… What in the hell were the NYPD and MTA doing transporting arrested individuals on a public transit bus operated by an MTA driver? Last I checked the city has paddywagons and corrections buses for that – I saw many of them parked outside Grand Central last night. This is an abuse of power, an exercise of the police state, and its only imaginable purpose would be to obfuscate the efforts of the legal aid volunteers, making it harder for them to determine where those arrested were being transported. My friends were charged with loitering and obstruction of traffic – phony charges for unlawful and unnecessary arrest. No crimes were committed.

Returning to the point of Mayor de Blasio failing to understand the logistics of a fare-free system funded entirely by taxes, I find that laughable. The system is already largely funded by state and federal taxes and subsidies! It’s much harder to fiscally reconcile a system suffocated by debt due to a dependence on municipal bonds. 17% of the MTAs 2020–2023 operating budget – nearly $2.9-billion each year, over 1 billion swipes – is devoted to debt services. Ex-NYCTA President Byford’s supposedly revolutionary budget plan requires additional issuance of municipal bonds and increases the deficit over the next three years. For those of you who don’t know what municipal bonds are, they’re investment tools used by banks and wealthy individuals to financially profit off sending the city these same businesses and investors reside in further into debt. This additionally allows the very same banks, corporations, and wealthy individuals to avoid paying their fair share in property and income taxes which would be utilized to maintain an appropriately funded city budget. In contrast to the Mayor, I fail to see how a system that relies on pay-per-ride farebox recovery works – because so far in the history of the MTA it hasn’t! The system has been in debt since the city first acquired it from the private companies which once operated it, and since then it has amassed nearly $44-billion worth of debt in the form of municipal bonds.

In order to increase revenue acquired from fares, an increase of ridership or a fare increase must occur. With the MTA limiting service on many of its lines for much needed repairs that I and other transit advocates support, it is unlikely they will see an increase in ridership until these repairs are completed. As for a fare increase, that is always expected to be met with great opposition and the threat of ridership decreasing – all it does is force more of a burden onto the needy who have no choice other than to use public transit, and inadvertently promotes the use of personal vehicles and cabs which contribute to congestion, gridlock, traffic, and pollution. A budget dependent on fare recovery projections, and not funded in advance by taxes, can never be expected to function efficiently.

The Gross Metropolitan Product of the NYC metropolitan area is roughly $1.5-trillion. All income earners in the NYC metropolitan area are required to match their state tax contributions with a city tax. If we want to be simplistic about a tax approach to replacing the current farebox funding, a 0.5% tax increase on all income earned in NYC would generate $7.5-billion a year – an additional $1-billion than that generated by NYCT, LIRR, and MNR fares – of which less than 60% goes to fund city subways and buses. This tax increase would end up costing a family whose combined income is $100,000/year only $500/year, or roughly the cost of 4 unlimited monthly MetroCards. If we wish to tax businesses rather than individuals, I would suggest we tax the institutions who benefit most from New Yorkers having the ability to travel easily. These are the Banking Institutions who have robbed the city through the control of its debt and the Real Estate Investment Trusts who capitalize on gentrification. If we wish to tax those who don’t take advantage of a mass transit system and by doing so contribute to congestion, traffic, gridlock, and pollution, we can tax the parking facilities who have skated by paying minimally in property taxes while generating huge profits, and the ride-share companies who are able to operate at loss-leading rates by mistreating their employees and avoiding taxes through loopholes. Whatever the method, nearly every single subway and bus rider would find themselves saving money on transportation by mass transit being funded through taxes rather than fares. In addition, riders would benefit from the most well funded MTA since its inception.

A fare-free system may seem somewhat confusing when all New Yorkers have ever experienced is the fare we’ve been subjected to paying, but it’s hardly a radical idea. Smaller cities across America have adopted a fare-free system, and as a result they’ve witnessed a larger, more balanced budget, an increase in ridership, and a decrease in personal-vehicle traffic. New York has lead the way in public transit for many years – it’s inherent to our identity as it’s the vital circulatory force that gives our city life – but its success has been hindered by debt and underfunding. A fare-free system is a safer system, a more efficient system, and a system that can combat systemic classism and racism by empowering people through its equity. Protesters like myself represent the best interests of this city and I hope we are treated amicably and with dignity by our fellow New Yorkers in our efforts. •