Canada, Palestine and the ‘Deal of the Century’: Four Statements

The Trump Administration has just unveiled the details of its “Deal Of The Century.” This plan includes, but is not limited to: 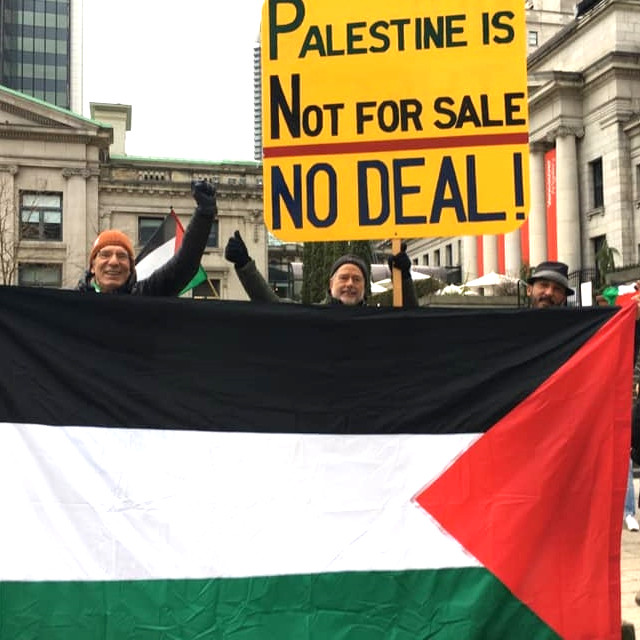 These are just some of the aspects from this plan that has already been rejected by the Palestinian people and its leadership at large.

The road to Palestinian freedom lays first and foremost in addressing Israel’s regime of settler-colonialism, occupation and apartheid, in Israel dismantling its illegal settlements as well as recognition of the right for return.

Only consistent pressure on Israel, including through support for the Boycott, Divestment and Sanctions movement, can bring about lasting and meaningful change for both Israelis and Palestinians. •

Canada Palestine Association is an activist organization that has been doing Palestine solidarity work in BC for over 37 years.

On January 28, 2020, US President Donald Trump unveiled his “peace” plan for Israel-Palestine alongside Israeli Prime Minister Benjamin Netanyahu. Notably absent alongside these two embattled leaders, fighting to hang on to their damaged political careers, was any of the Palestinian leadership. This is simply because the disastrous plan that Trump has touted as the “Deal of the Century” is being seen by much of the world for what it really represents – the “Steal of the Century.” Trump’s new plan is a significant shift from previous American foreign policy in the region, and a slap in the face of international law.

Independent Jewish Voices Canada condemns this ill-fated plan in no uncertain terms. We stand with the Palestinian people who are taking to the streets in the thousands, both in Palestine and throughout the world, to denounce what many have called Trump’s “apartheid plan.” Moreover, we call on the Canadian government and Foreign Minister François-Philippe Champagne to unequivocally denounce this plan, and instead to remind Trump, Netanyahu, and the international community of their responsibilities to follow the principles of international law and justice.

There has never been a better time for BDS

While the Trump plan could represent a disastrous turn for any chance of peace and justice in Israel-Palestine, for us it means staying the course, digging in our heels, and continuing the work we’re already doing.

Independent Jewish Voices (IJV) was the first national Jewish organization in Canada to endorse the Palestinian campaign of boycotts, divestments, and sanctions (BDS). Trump’s plan is a stark reminder of the importance of BDS at this critical juncture.

It is worth recalling the main demands of the BDS campaign, and how they relate to Trump’s apartheid plan:

1. Ending the Israeli occupation and colonization of all Arab lands and dismantling the wall

Trump’s plan proposes that Israeli settlement blocs inside the occupied West Bank remain under Israeli control; that Jerusalem be Israel’s “undivided” capital; and that some form of a Palestinian state also be created, albeit with limited sovereignty.

The Israeli occupation of the Gaza Strip and the West Bank is the longest military occupation in modern history. Trump’s position to suddenly view the Israeli settlements in the West Bank as legal under international law is a complete reversal of previous American foreign policy, and patently dangerous. The path towards a just peace in the region must include dismantling Israeli settlements, ending the occupation, and tearing down the inhumane wall.

2. Recognizing the fundamental rights of Arab-Palestinian citizens of Israel to full equality

Trump’s plan suggests stripping nearly 250,000 Palestinian citizens of Israel of their citizenship, and transfering them to a future Palestinian state. The mayor of Tayibe (one such Israeli town slated for a population transfer), Shuaa Massarweh Mansour, stated in no uncertain terms, “There will not be another Nakba” (the Arabic word for ‘catastrophe’, referring to the ethnic cleansing of Palestine during the war of 1948).

3. Respecting, protecting, and promoting the rights of Palestinian refugees to return to their homes and properties as stipulated in UN Resolution 194

Trump’s plan will effectively put an end to one of the central tenets of the Palestinian struggle: the right of return for all Palestinian refugees ethnically cleansed by Israel from 1948 onwards. The plan lays it out in a blunt and cruel fashion: “The Israeli-Palestinian Peace Agreement shall provide for a complete end and release of any and all claims relating to refugee or immigration status. There shall be no right of return by, or absorption of, any Palestinian refugee into the State of Israel.”

We know that there can be no just peace in Israel-Palestine until all refugees are allowed the right to return home. •

Independent Jewish Voices Canada (IJV) invites all people of good conscience to join us in BDS actions, and resisting this plan with all our hearts and energies. 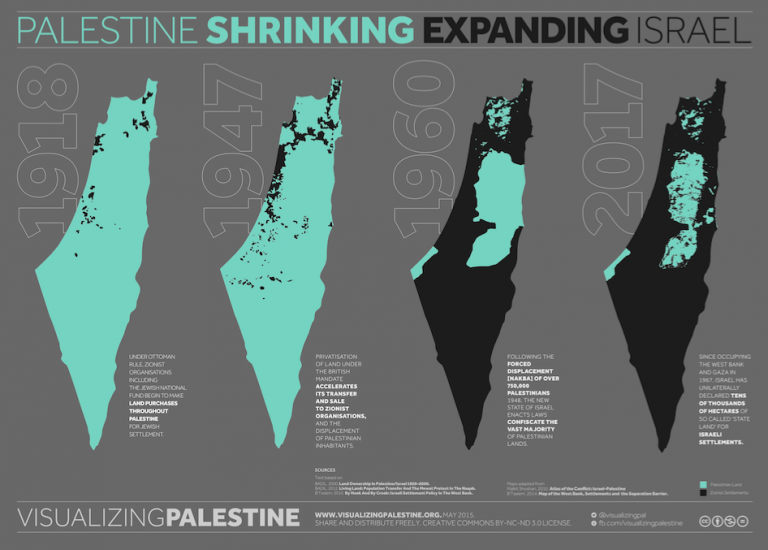 Canadians for Justice and Peace in the Middle East

Canadians for Justice and Peace in the Middle East (CJPME) is highly critical of the Mideast Peace Plan announced by US President Donald Trump today – one that CJPME considers preposterous. The plan was done without the participation of the Palestinians, and ignores both international law and international precedent on the conflict. The Plan further entrenches pro-Israel decrees that Trump has made in recent years, including that Jerusalem will be Israel’s “undivided” capital and that Israel will be able to annex major illegal Israeli colonies in the occupied West Bank. Given that the Plan virtually ignores Palestinian interests, CJPME considers it useless in terms of resolving decades of violent conflict.

“The Plan announced today has nothing to do with the Palestinians,” announced Thomas Woodley, president of CJPME. “The Plan is a bogus ‘deal’ between the US and Israel, and makes no serious effort to accommodate any of the legitimate grievances of the Palestinians.” CJPME points out, for example, that Israel’s colonies (a.k.a. “settlements”) have been repeatedly denounced by the international community as being illegal. The 2004 International Court of Justice (ICJ) ruling on the conflict concluded that Israel’s colonies violate the Fourth Geneva Convention. By allowing Israel to annex these colonies with no penalty or swap simply rewards Israel for its decades violating international law. With this new Plan, Israel has no incentive to discontinue its practice colonizing the Palestinian land that it occupies militarily.

This latest Plan cements CJPME’s belief that the US can no longer masquerade as an “honest broker” between Israel and the Palestinians. CJPME points out that the Trump administration has sought to undermine the Palestinian negotiating position for years. In September, 2018, Trump closed the Palestinian embassy in Washington. That same month, the Trump administration announced it would end all humanitarian funding the Palestinian refugees. In November, Trump’s Secretary of State Pompeo announced that Washington no longer regarded Israeli settlements on occupied West Bank land as inconsistent with international law. That Trump and Netanyahu would dare to announce a “Peace Plan” absent negotiations with the Palestinians is a farce.

CJPME calls other bodies or players to assert a role for themselves in the negotiations between Israelis and Palestinians. “If we allow Trump to continue with this sham, it sends a message to other rogue leaders and countries that international law is meaningless, and that ‘friendship’ with the US is the only bargaining chip of value,” concluded Woodley. CJPME does not consider Canada eligible to be a broker between Israel and the Palestinians, as Canada has largely aped the US’ pro-Israel Mideast policy in recent years. CJPME could envision the UN, the European Union, or other groups of countries (including perhaps China and/or Russia) asserting themselves into the negotiations process. •

Canadians for Justice and Peace in the Middle East (CJPME) is a non-profit and secular organization bringing together men and women of all backgrounds who labour to see justice and peace take root again in the Middle East. Its mission is to empower decision-makers to view all sides with fairness and to promote the equitable and sustainable development of the region.

Canada’s new Foreign Affairs Minister Francois-Philippe Champagne made a very cautious statement about Trump’s “Deal of the Century.” He avoided referring to it as a “peace” plan, or to its claim that the deal would create a Palestinian State. He said he would “examine the details.” For the minister’s benefit, CTIP offers a quick summary of the plan.

“Canada recognizes the urgent need to renew efforts toward a negotiated solution to the Israeli-Palestinian conflict, and will carefully examine the details of the US initiative for the Middle East peace process,” wrote Canada’s Foreign Affairs Minister Francois-Philippe Champagne in a carefully written press release.

The Minister’s statement implies that his department has not yet studied or formed an opinion on Trump’s 181 page “Deal” (official title: “Peace to Prosperity: A vision to improve the lives of the Palestinian and Israeli people”) which has been angrily denounced by all Palestinian parties, and many human rights organizations. The list of critics even includes some liberal Jewish ones. Not surprisingly, it has been praised by all of Israel’s political leaders and by the Jewish establishment in Canada like CIJA and Bnai Brith.

To help Minister Champagne make up his mind on the substance of the “Deal,” CTIP offers this quick summary of some of its key elements. Notwithstanding its official claim to be a “peace plan” it does not take much examination to see that its proposals amount to a complete victory for Israel, and a complete capitulation for the Palestinians. It is a plan of conquest – not peace – and not one that any Palestinian leader could accept.

Here are ten of its main provisions:

Notwithstanding its official claim to be a “peace plan” it does not take much examination to see that its proposals amount to a complete victory for Israel, and a complete capitulation for the Palestinians. It is a plan of conquest – not peace – and not one that any Palestinian leader could accept. It would be very difficult to find ANY Palestinian, or human rights advocate who would think that this is “fair” or a “peace deal.”

What will Canada’s Assessment of the Plan Be?

Will Minister Champagne dare to criticize (or make any comment) on the Trump plan after he “examines the details”?

In addition to asking Palestinian Canadians, international lawyers, UN experts like Professor Michael Lynk who is the UN Special Rapporteur on Human Rights in the Occupied Territories, who called the plan “lopsided,” he might want to check with a non Zionist Jewish organization like Independent Jewish Voices Canada, or even a liberal Zionist organization like Canadian Friends of Peace Now (CFPN).

CFPN was scathing in its assessment, calling the plan the “sham of the century.” CFPN said the plan is “guaranteed to exacerbate rather than resolve the Israeli-Palestinian conflict. The plan pays lip-service to a two-state solution, but, at the same time, green lights immediate Israeli annexation of the entire Jordan Valley and the extension of Israeli sovereignty to settlements in the West Bank.” The group characterized the plan with terms such as dangerous, “one-sided” and “double speak.”

CTIP does not agree with Zionism of course and we often disagree with CFPN. But on this point, CTIP feels obliged to agree. •

Canada Talks Israel Palestine (CTIP) is the weekly newsletter of Peter Larson, Chair of the Ottawa Forum on Israel/Palestine (OFIP). It aims to promote a serious discussion in Canada about the complicated and emotional Israel/Palestine issue.