The Limits of Capitalism

At this point in human history, the limits of capitalism and the limits of our species’ life on Earth have converged. We have never been here before, and we cannot go back. 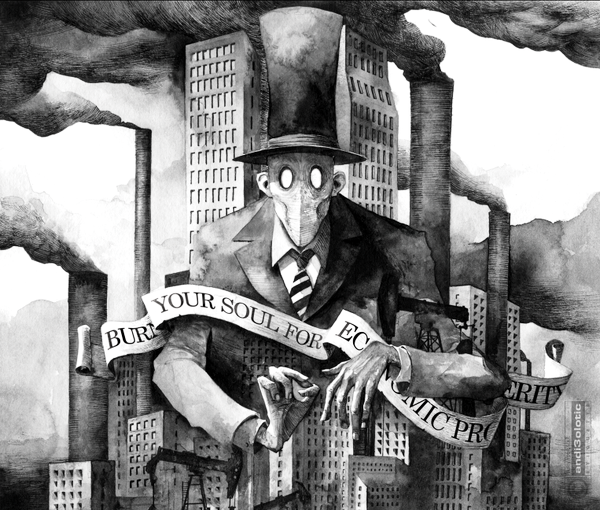 The political activism of my youth was largely in solidarity with anti-colonial movements in Africa and Palestine, anti-US imperialist movements and dictatorships in Latin America, and solidarity-building between the labour and other social movements around a broad program of democratic, anti-capitalist reforms. In those struggles, there was always an assumption that social transformation could draw upon the resources of a reasonably intact natural world. No more. Capitalism, patriarchy, and racism now threaten to destroy this world, along with its tenuous civilizational achievements. We are all of us, now, face to face with the kind of ‘deworlding’ that traumatized Indigenous peoples following the arrival of colonizers.

We, on the left, keep trying to find analogous moments in human history (the rise of fascism, world war two) when ‘normal’ life is upended and nothing can go on as before – including academic work, which must give way to activism on every front. Apart from the threat of nuclear war, humans have never faced a ‘limit’ like this, and even that threat was unlike climate destabilization because at least it could be controlled by disarming the technology. What we have set in motion now, in the capitalocene, is likely beyond technological solutions, notwithstanding Promethean male fantasies of Mars colonies and planetary geological engineering.1 What we have set in motion is now, at least in part, beyond human control. That is, no re-engineering of social relationships and modes of production will reverse the biological and physical processes that have been unleashed.

Breakdown of a Climatic System

In the span of a single lifetime, since WWII, industrialized societies have loaded enough greenhouse gases (GHG) into the atmosphere – mostly from the combustion of fossil fuels – to cause the breakdown of a climatic system that was relatively stable and friendly to biodiverse life for 800,000 years.2 More than half of all the GHGs emitted since 1750 have been emitted since 1989 – that is, when we knew what we were doing.3

To give you just a few examples of climate breakdown: Thawing soil in the Arctic is now releasing an estimated 600 million tons of C02 per year – an amount that exceeds the CO2 emissions of 189 countries. This is a biofeedback effect of warming at the north pole, which has now warmed by 4ﹾC (over the pre-industrial average).4 This is not a genie that we can put back in the bottle.

Our emission of greenhouse gases has caused ocean warming,5 acidification, and anoxification. One of the (frankly terrifying) consequences of ocean warming is reduced phytoplankton growth. Phytoplankton are the basis of the marine food chain, producers of half of the oxygen in the Earth’s atmosphere, and drivers of the “biological pump that fixes 100 million tons of atmospheric carbon dioxide a day into organic material, which then sinks to the ocean floor…”6 They are responsible for half of the photosynthesis that takes place on Earth’s surface, although they account for less than 1 per cent of photosynthetic biomass. Studies indicate that phytoplankton biomass has decreased by more than 40 per cent since 1950 and continues to decrease at an increasing rate.7 Scientists warned in 2010 that if – due to warming surface waters – the phytoplankton in the upper ocean stop pumping carbon down to the deep sea, atmospheric levels of carbon dioxide will eventually rise by another 200 ppm and global warming will accelerate.8 (We’re now at about 411 ppm, having passed 400ppm in 2013.)

Meanwhile, the die-off of phytoplankton, kelps, and corals has already affected marine species that depend on them for food or habitat. With the crash of wild fish stocks (due to multiple causes, in addition to global warming) humans are losing a source of protein that currently supplies one fifth of our protein consumption. One marine scientist says that, “in the best case,” it will take another 1,000 years “for the current damage to be reversed.”9

Eco-Marxists like John Bellamy Foster and Brett Clark have drawn attention to Marx’s investigation of the problem of the loss of soil fertility in 19th century Britain, following the commercialization of agriculture and changes in farming practices.10 I picture Marx in the library at the British Museum, devouring all kinds of contemporary science, and wishing he had time to follow all the threads. I suspect that Marx would have been very interested in the life cycles of phytoplankton, had their existence been known to him. Could he have imagined that capitalism could survive in the face of widespread knowledge that it is destroying the conditions for life on our planet? That we could we arrive at a place, where, for millions, it is easier to imagine the end of the world than to imagine the end of capitalism?11

From the Catastrophic to the Unthinkable

Future scenarios range from the catastrophic to the unthinkable. We are now on track for warming of more than 4ﹾC by 2100,12 or 3.5ﹾC if all countries actually meet their Paris COP commitments, and 8ﹾC is no longer impossible (although we do still have a window of opportunity to hold the global average temperature increase to the lower end of the spectrum). In a 4ﹾC world, climate models predict that the planet will not have the carrying capacity to support the current human population.13 Professor Hans Joachim Schellnhuber, an eminent climate scientist and director of the Potsdam Institute, said earlier this year that “at 4ﹾC, Earth’s … carrying capacity estimates are below 1 billion people.”14 Professor Kevin Anderson of the Tyndall Centre for Climate Change has reached a similar conclusion, estimating that “only about 10% of the planet’s population would survive at 4ﹾC.”15

The UN predicts that there will be 200 million climate refugees by 2050.16 Depending on by how much global temperature rises, there could be “a billion or more vulnerable poor people” displaced from their homes by mid-century.”17 Today’s governments are unable to co-operate to deal with 6 million Syrian refugees. Instead, most are building higher walls, using coast guards to turn back ships, and building detention centres.

And, of course, one can go on… I haven’t touched on the effects of chemically-and-fossil-fuel-intensive agriculture, beef consumption, over-fishing, toxic chemicals, plastics, industrial pollution, and so on. I haven’t mentioned the great loss of other species – half of all non-human life on the planet in my lifetime in this sixth period of mass extinctions. Our destiny is entwined with that of the other species with whom we share the planet.

That the over-shoot of planetary ecosystem boundaries is a limit to capitalism – and to human population growth and consumption – like no limit we have faced before, is what the global movement of school-strikers is trying to tell us. It is what the Extinction Rebellion movement is telling us.

What does this mean for political economy? Well, if I can repeat an argument I made in the pages of Studies in Political Economy in 1994 (25 years ago!) we have to stop thinking, programmatically, in terms of economic growth.18 We must take up the calls for degrowth – in whatever discursive form best fits our political contexts – and for the rapid decarbonization of our systems of production, consumption, communication, and transportation. This is not the moment to rally behind incremental, contradictory, and often socially regressive, market-based approaches to environmental regulation; it is the moment to shift popular consensus in the direction of a much more radical agenda of reforms rooted in ecological and egalitarian principles. This agenda needs to be developed regionally, by civil society actors, taking into account local ecosystems and other factors, but in connection with other regions. We are at a crossroads where either global apartheid and authoritarian, nativist regimes will prevail, or a radical democratization from below motivated by humanist and universal values as well as love of biodiversity. 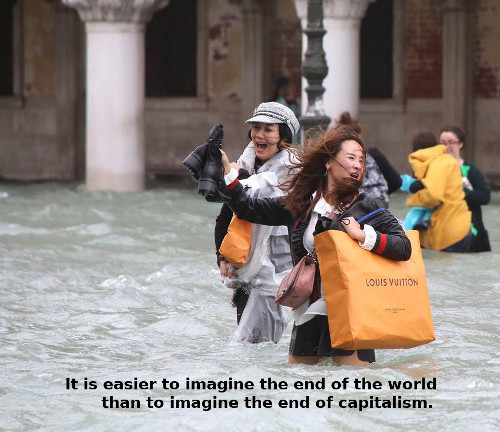 Actions like protests and civil disobedience need to be articulated to an agenda of reforms to realize political democratization and green transition. Where civil society is weak and disorganized – as in Alberta – we need to bring together our intellectual, institutional, and leadership resources to develop a program around which we can mobilize support. A major resource in this regard is the university, but disciplinary and incentive structures mean that there are trenches that must be won here, too, for the university’s resources to become available to community partners.19

Elections seem to be windows of opportunity and it is understandable that we turn our energies toward the debates and campaigns – and to preventing the worst outcomes. But given the existing institutional barriers to electing a green-left government, I think we should prioritize the work of coalition-building and democratic planning – bringing forward concrete alternatives that people can fight for. The slogan “What do we want? Climate action!” is a starting point, but it puts the ball in the court of governments (and economists) that are only going to offer market-based measures – at best – or delay meaningful action.

A few further points with regard to planning for green transition:

This organizing work is also a way of coping, psychologically, with the overwhelming grief that many of us feel about the world we are losing – a world our children will never know – and about the world they will be inhabiting in the decades ahead. At the very least, we must be able to say we tried.

Greta Thunberg uses the phrase: “We will not be bystanders.” I don’t know if this is her intention, but this phrase could be a reference to the choices available to people in the 1930s, as they observed the rise of fascism and the deportation of Jews, Communists, homosexuals, the disabled, the gypsies, and others to “concentration” camps.20 Thunberg’s call is a moral one, recognizing that the world’s poorest populations will be the most devastated by climate destabilization. Shall those of us who are privileged to live in the northern hemisphere and in the global middle class ‘stand by’ while millions die, or flee, from the disasters wrought by global warming?

Will we ‘stand by’ while short-term greed renders our planet uninhabitable for future generations? Or we will commit ourselves fully to making another future possible? To wresting power from the ecocidal one per cent and its governments? •

To mark its 40th anniversary, Studies in Political Economy, A Socialist Review sponsored a conference October 26 at Carleton University, Ottawa. The theme: “The Limits of Capitalism and the Challenge of Alternatives.” Among the speakers was Professor Laurie Adkin of the University of Alberta, who addressed the conference via Skype. Prof. Adkin has kindly agreed to the publication here of the notes she prepared for her panel presentation, in my opinion an outstanding contribution — Richard Fidler.