India’s Vice President M. Venkaiah Naidu made a curious comment on 28 December. “Express dissent in a democratic way,” he said. Before he became the Vice President – a largely symbolic role – Naidu was the President of the Bharatiya Janata Party (BJP), the far-right political organization that now governs India. Naidu made his comment in the context of nation-wide protests against an exclusionary set of laws and policies pushed by his party. These laws and policies include the Citizenship Amendment Act (CAA), the National Population Register (NPR), and the National Register of Citizens (NRC). These laws and policies deeply discriminate against India’s 200 million Muslims. 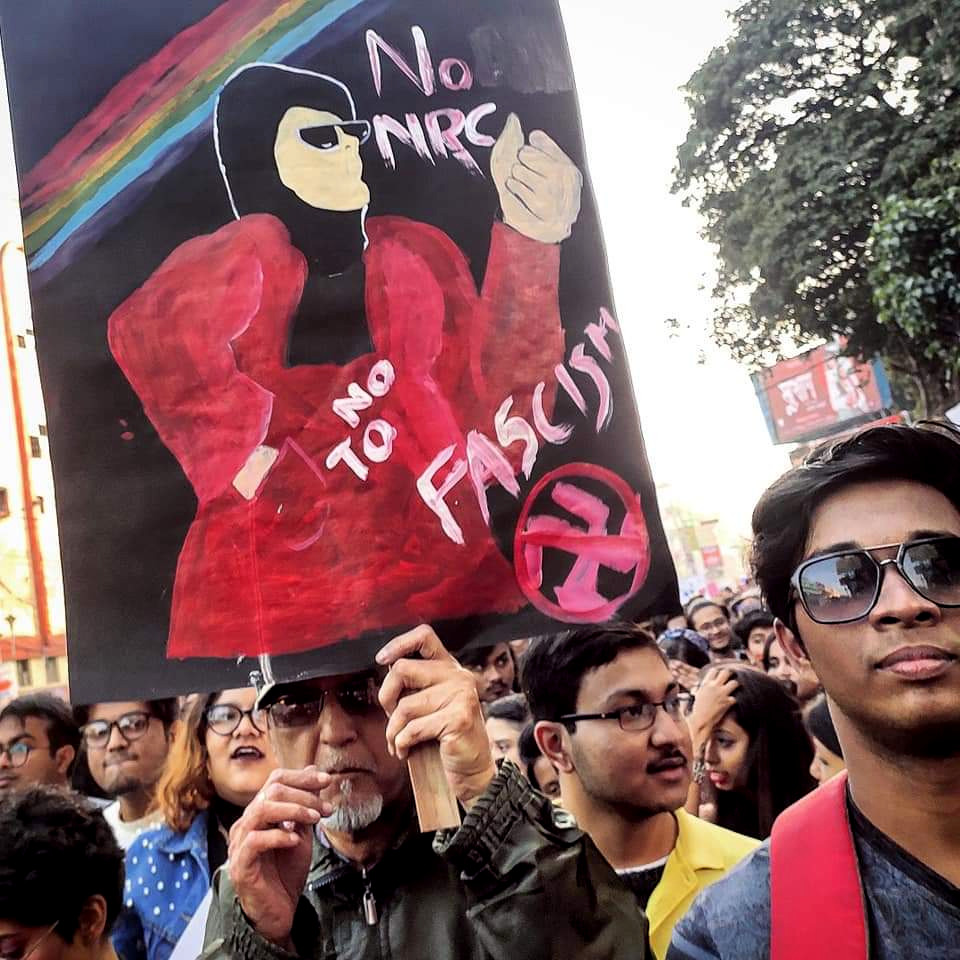 Peaceful protests have been taking place across the country. Every public event seems to be transformed into a demonstration against not only these laws, but the government itself. In Kolkata – from where I write these words – the annual Rainbow Pride Walk combined Gay Pride with opposition to these laws. Signs at the march read, “No CAA” and “No to Fascism.” The Indian flag – not often seen at these events – was everywhere, a symbol of the fight over how ‘India’ should be understood.

Street signs indicate widespread opposition to these laws and policies from a range of political parties: everyone, except the BJP, seems to be against them. It has invigorated a serious debate about whether India’s State remains secular, and whether Indian society contains resources for secularism.

Secularism in the Indian context means that the State should respect and tolerate all religions; Indian society should equally be tolerant of religious diversity.

What secularism has not meant is that the State should drive a policy for the secularization of society, which would include promotion of rationality over mysticism and the taxation of religious institutions.

Even the weak form of Indian secularism is in dispute now with the BJP pushing for the Indian State and Indian society to be dominated by their own rigid and narrow view of Hinduism. The BJP’s divisive politics threatens the secular compact with India’s large non-Hindu population, particularly the 200 million Muslims who live scattered across this vast country. The BJP’s political and cultural logic is against the respect and toleration of Islam and of Muslims. It is a politics of cultural suffocation, impracticable for India’s social and cultural diversity.

BJP leaders – including Prime Minister Narendra Modi – continue to use the language of secularism to justify their political agenda. Over the course of the past decade, the Indian State and the courts have formulated policies that accommodate the demands of minority groups, including on regressive grounds (such as laws of marriage and divorce).

In the name of secularism, the BJP has gone after these laws, using their existence to suggest that it is not the BJP but Muslims who are not secular; an illustration of this is the BJP’s attempt to undercut the Muslim Personal Law by a Uniform Civil Code. By this sleight of hand, the BJP masquerades as a defender of the Indian compact even as it undermines it. This confusion now seems to be over. The BJP’s strong anti-Muslim agenda over the definition of citizenship cannot be easily defended as the BJP’s commitment to secularism; it is seen for what it is – far-right bigotry.

One mechanism to preserve the diversity of India has been to emphasize the federal system over a central State. India is divided into twenty-eight regional states and nine union territories. One of these states – Jharkhand – had a provincial election as these protests cascaded. The ruling BJP state government was defeated, and a coalition of a regional party – the Jharkhand Mukti Morcha – and the Congress Party won the election. At the swearing in of the new chief minister – Hemant Soren – political leaders from a range of non-BJP parties came to make the ceremony into a political rally. These leaders – chief ministers of states and leaders of political parties, including the Communists – argued that this election was a mandate against the BJP.

By March 2018, the BJP (with its allies) ruled over 21 states, which account for 70 per cent of India’s population. It appeared as if the BJP was unassailable. Then the BJP’s fortunes at the state level fell, with the BJP losing power in five important states – Madhya Pradesh, Rajasthan, Chhattisgarh, Maharashtra, and Jharkhand.

Many of the non-BJP ruled states have said that they will not honor the slate of discriminatory laws. This is a direct political challenge to the BJP. If the non-BJP opposition parties which gathered to celebrate Soren’s victory in Jharkhand are able to form a principled alliance, then it is likely that they will weaken the BJP’s political power.

Federalism is a defensive barrier against the authoritarianism of the BJP. So too is the attempt by opposition parties to isolate the BJP. A combination of the BJP’s arrogance and its failure to subordinate India’s diversity has shown that its authority is not derived from public acceptance of its agenda but from money and muscle power.

Unable to defend its discriminatory agenda, the BJP has taken recourse to raw police power. BJP leader Yogi Adityanath, who is the Chief Minister of India’s largest state – Uttar Pradesh (population: 200 million) – has shut off the internet in key areas and used the full force of the police to beat, arrest, and intimidate anyone who opposes the BJP policy. Of the twenty-seven people killed across India over these protests, nineteen were killed in Uttar Pradesh. A fact-finding team found that Yogi was running a “reign of terror” in the state against protestors.

When five women drew chalk drawings (kolam) with slogans against the discriminatory laws in Chennai (Tamil Nadu), they were arrested; when three lawyers went to the police on behalf of the women, the police arrested the lawyers. They join the thousands who have been arrested or held in preventative detention. Meanwhile, the internet has been cut off for large parts of the country. Two foreign nationals who had protested the laws – including a German student – have been deported. A fact-finding team found that the Delhi Police – which is controlled by the BJP government – was “unrelenting and cruel” in its behavior at Delhi’s Jamia Milia Islamia University.

Vice President Naidu warned that dissent should be expressed in a democratic way. He was merely reflecting reality, since the protests have all been extraordinarily peaceful and respectful; the protestors have reclaimed the Indian flag and its Constitution and are holding fast to the view that they have the law and the public sentiment on their side.

It is the documented behavior of the BJP officials and of the police that needs to be chastised by the Indian Vice President. The violence that has taken place is the violence of the BJP’s hooligans and of the police, not the violence of the dissenters (as noted by many observers, including Human Rights Watch). It has become formulaic for the BJP to accuse its opponents of being “anti-national”; now public sentiment suggests that it is the BJP which is anti-national.

In January, the trade unions and the left parties have called for a week of protests from 1 January onwards, which will culminate in a general strike on 8 January. Last year’s trade union strike brought 180 million people onto the streets. If the momentum of these protests remains, then this strike on 8 January will be enormous; it could weaken the BJP’s political power fatally. •