The 2018 increase in Ontario’s hourly minimum wage to $14 was perhaps the most substantial victory for low-wage workers in decades, including workers at Pearson International Airport.

In a recent survey, it was found that 1 in 5 of the airport’s 50,000 workers earns minimum wage. The Fight for $15 and Fairness continues the struggle, confronting a Conservative government that cancelled the scheduled increase to $15 per hour and froze minimum wage for a decade when last in power. 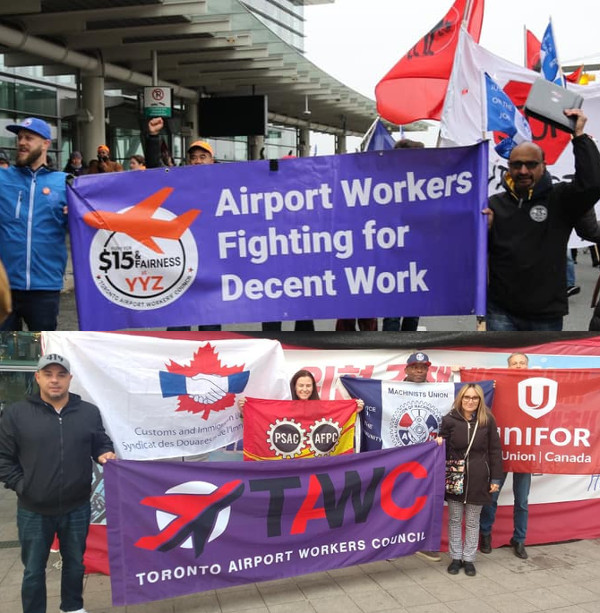 It may be time to “rescale” approaches to raising minimum wages. The province is the primary regulator of labour standards, the exception being federally regulated industries, such as air transportation.

The Trudeau government is considering a new federal minimum wage, breaking with the tradition of matching provincial rates. Any increase that challenges the Doug Ford regime would be welcomed by federally regulated workers in Ontario. If the Conservatives do, however, take power federally we can predict how short-lived these gains may be.

Minimum wages can also be established at a local level. The Ontario Living Wage Network calculates local living wages based on local costs of living with Toronto set at $22 per hour.

A few institutions and municipalities have been certified as living wage employers as they pay employees the local established rate. While this approach takes into consideration the cost of living differentials among communities, it remains a voluntary system and applies only to workers employed by agreeable bosses.

What if the federal government mandated that all workers with a Restricted Area Identity Card (RAIC) enabling them to work at the secure airport must be paid a minimum “Pearson Premium” wage?

It is economically feasible given the revenue generated by the industry and would assist in the retention of airport workers. Decreeing a local living wage for a vital economic region and strategic sector that can afford to pay is a much easier sell for politicians.

Living wage agreements for airport workers have proven achievable in other jurisdictions. In New York, workers recently fought for and won minimum wage increases to $19 per hour by 2023 at Newark, La Guardia, and JFK. In 1997, Los Angeles passed a living wage ordinance that covered thousands of workers at LAX, who will make a minimum of $15 per hour this year plus mandated benefits.

The upcoming change in leadership at the Greater Toronto Airport Authority may be an opportunity for change. Deborah Flint, incoming president and CEO, was previously CEO of Los Angeles World Airports, the living wage employer that administers LAX.

A living wage that starts at Pearson Airport (YYZ) and spreads to other employment zones is one way of circumventing intransigent provincial governments determined to protect low wage employers at the expense of workers. •