Ford Takes on Bill 148: But There is Resistance

When the Tories were elected to govern Ontario this past June, it was a day that many were both dreading and expecting.

The Ontario government has finally unveiled their legislation that would repeal the gains workers made from Bill 148. In an emergency action coordinated by the $15 and Fairness campaign, 500 workers were out in the streets of Toronto yesterday evening, to send a message to Premier Ford that the actions he and his party have taken to repeal Bill 148 has betrayed workers across the province.

The Bill freezes the minimum wage at $14 and only indexes it to inflation beginning in October 2020. 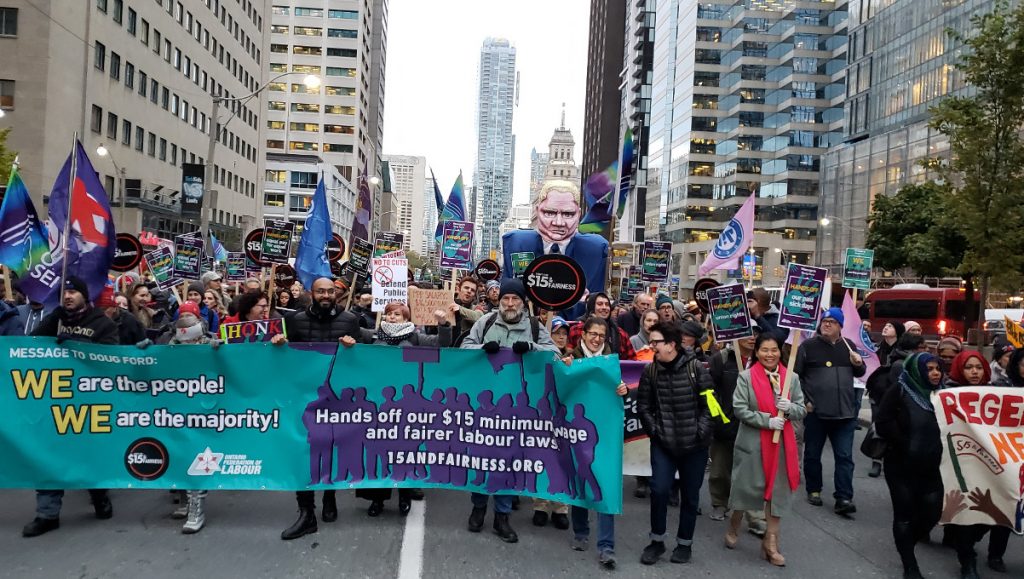 The ten personal emergency leave (PEL) days, two of which are paid, becomes 8 PEL days that are proscriptive (3 for sickness, 3 for family emergency, 2 for bereavement). None of those PEL days are paid. The requirement for workers to provide doctor’s notes in order to take these emergency leave days have returned. For workplaces with over 50 employees, these measures are worse than what existed before Bill 148.

“Doctors and nurses are busy enough without the additional task of writing sick notes, which will cost taxpayers hundreds of dollars,” says Dr. Kate Hayman, emergency doctor involved in the Decent Work and Health Network. “Let’s call this policy what it is. It’s bad for workers, and it’s bad for the health of every Ontarian. From a government that promised to listen to doctors and end hallway medicine, I expected better.”

The 3 hour pay guarantee for on call and shift work for workers not called in, or for shifts cancelled within 48 hours is among the long list of gains made that will no longer come into effect January 1, 2019.

Equal pay for equal work for part-time, casual, contract, and temp workers has also been scrapped, with the equal pay for equal work provision reverting back to gender equity provisions, rather than for the type of work done. Further, workers will no longer have the provision that put the onus on the employer to prove that workers are not employees in order to prevent job misclassification.

Rules that lowered the threshold of union cards needed to be signed to get employee lists, sector-specific card check, and sector-specific protections against contract flipping has also been eliminated.

Given the estimated inflation rate between January 2018, the last increase in the minimum wage and October 2020, workers will be looking at a real wage cut of $0.80 to $1.00 by the time indexing comes into effect.

Molaka Barbin is one of the many food service industry workers that was counting on the planned increase to the minimum wage. “The $15 and Fairness campaign is good for us. $15 is good for us, and good for everyone. Now, I feel very sad. Everywhere, prices are increasing.”

Scrapping paid PEL days will keep workers going to work, even if they’re sick – which will undoubtedly harm public health and put further strain on our public health system. Mandating reasons for each set of PEL days requires workers to jump through more hoops to get them approved, which further adds to the stress that workers and their families will have to deal with. Nadira Bedum, a Toronto based $15 and Fairness organizer said:

“Not only me, but my community – Regent Park is disappointed. When I talked to workers yesterday, they were shocked. 2 paid sick days allows workers who are sick, whose kids are sick to stay home without any stress. Now, there’s no choice for workers.”

The scrapping of equal pay for equal work provisions in Bill 148 sends a message to employers to continue to attack the most vulnerable workers who are not in full-time employment. Since proving job classification is no longer on the onus of the employer, an increase in misclassification is expected, especially since it’s unlikely for the government to increase workplace inspections.

While Bill 148 did not grant card check in all workplaces, it was still a step forward. Rolling back these changes will have a negative effect on union density, with studies showing that union organizing increased significantly in Ontario when the Bob Rae NDP government introduced card check. Once the Harris government came into power and reversed that legislation, organizing decreased significantly.

Contract flipping, which has been used to break unions, (most notably at Pearson Airport) has long been an issue when it comes to backdoors to union busting. Now with the repeal of provisions preventing it, the government is explicitly sending a message to businesses that it is okay. Under the new legislation, contract flipping will increase and intensify.

What This Means for Unions

Ford’s decision to repeal major sections of Bill 148 is a clear attack on workers, and on unions who will face increasingly difficult organizing conditions, making it harder to gain new members.

“The attacks on unions are unforgivable. It is only through unions that people have the ability to organize and fight back. This is unethical and absolutely goes against any of the teachings Ford professes to support.” said Reverend Dr. Cheri DiNovo.

The key issue moving forward is how unions will respond. The lessons of the Harris years should be obvious. Solely focusing on electoral politics will not work. Labour’s response to Ford’s anti-worker agenda will require mobilizing and deep organizing in communities. The work that the Fight for $15 and Fairness campaign has done in communities has accomplished huge gains for workers and made Bill 148 a reality.

“The determination of the people that make this movement never fail to inspire me. We sent a clear message that if this government thinks workers are going to go quietly, we’ve got another plan for them,” said Pam Frache, coordinator of the $15 and Fairness campaign. “Everything we’re doing right now is about laying the foundation for resistance yet to come. We’re going to keep fighting, keep mobilizing and keep speaking out – and we’re going to win.”

But with such a hostile government, the tactics will have to become more confrontational in order to leverage the pressure needed to make Ford and the Tories retreat. There were several missed opportunities in the fightback against Harris where the government looked like it was going to reverse course, but the pressure was throttled in favour of negotiation and electoralism. Now, we must learn from our past mistakes and build a broad and militant front in order to protect what we have already gained. Without that we won’t be able to make gains in the future.

“The threat is on the table at Queen’s Park. They are threatening poverty wages for the foreseeable future for the most vulnerable workers in the province. They’re threatening paid sick days, which has real life consequences. We’re still asking for Doug Ford to stand up to the big business lobbyists, and to stand with the people.” •

This article first published on the Rank and File website.

Chloe Rockarts is a young worker, unionist, #15andfairness organizer and contributor to Rank and File. Follow her tweets at @chloerockarts.

Gerard Di Trolio is a writer on labour and politics. Follow his tweets at @GerardDiTrolio.