The Need for a Programmatic Shift

Climate change is a trade union issue. That is what we increasingly, and rightly, have been told by international trade union leaders over the last ten to fifteen years. While the inter-governmental negotiations on climate change can be dated back to the Earth Summit in Rio de Janeiro in 1992 and the first so-called Conference of the Parties (COP) in Berlin, 1995, it was only about 15 years ago that trade union representation at the COP conferences reached around 100 delegates. Since that, representation has been increasing, and we have seen a growing trade union activity on climate change issues. 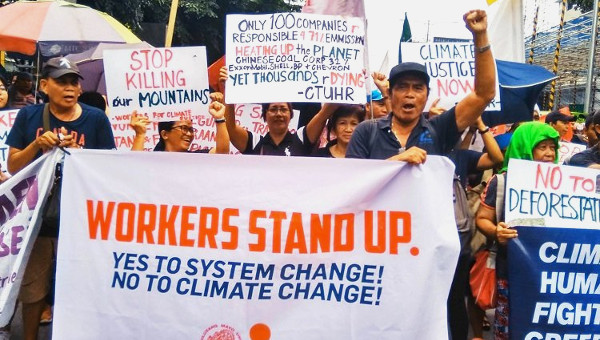 The major problem we face today is that very little happens in terms of climate change prevention. Even worse than that, we still move in the wrong direction. Emissions and temperature are increasing, the energy transition is not going on. At the Paris Summit (COP21 in 2015), the first ever global agreement to fight the climate crisis was concluded, but so far, most countries are far from meeting their voluntary commitments. Thus, the transition to a low carbon economy is simply not happening. Governments have been negotiating for more than 25 years in order to reduce greenhouse gas (GHG) emissions, but emissions have not been cut. They have rather increased immensely, by more than 60% since 1990 – and they are still increasing. Transport emissions have increased 120% over the last 30 years, and they are also still rising all over the world – even at a rate that outweighs cuts in other economic sectors. Renewable energy has been growing, but so has also fossil fuel. In 2018, 70% of new global energy demand was met by coal, oil and gas. Therefore, emissions will not peak in 2020 as is needed. They are expected to increase until 2030 and perhaps beyond.

While the Paris Agreement created optimism among many, this optimism has now largely been replaced by a sense of despair. There is a growing awareness among all progressive social movements that the current mainstream energy and climate policy is far from what we need. The enormous mobilizations we have seen among pupils and students over the last year is just one example that the mood is changing among people. Parts of the trade union movement supported or took part in these mobilizations but did not take a lead in this struggle.

Given this alarming situation, we should ask ourselves: why have our governments during the last 25-plus years been unable to agree on necessary measures – and even more so, been unable to do what science tells us is necessary to avoid climate catastrophe? It is not because of a lack of solutions. The climate crisis can be prevented. We do have what is required in terms of technology and knowledge to avert a climate catastrophe. It is the power to convert words into action that poses the greatest challenge – not least for the trade union movement.

During the more than 25 years of the COP process, we have seen that big oil, big finance, neoliberal governments and market forces have been unable to solve these problems on our behalf. Fossil fuel companies are among the biggest and most powerful companies in the world. They are executing enormous economic and political power to avoid policies that hurt their economic interests. There are, in other words, vested interests involved in this struggle. Therefore, only massive pressure from below, from a broad coalition of trade unions and other social movements can save us from climate catastrophe.

The Intergovernmental Panel on Climate Change concluded last year that, in order to stay within 1.5 degrees, human-caused CO2 will need to fall by about 45% from 2010 levels by 2030. Thus, emissions will need to peak within a couple of years. What makes this challenge even more demanding, is that investment in new clean energy capacity is currently going down. It fell by 8% from 2017 to 2018, and the reason is clear: profit margins are shrinking, and investors are turning elsewhere.

Thus, the neoliberal, market-focused approach to climate protection has failed spectacularly. This failure calls for a ‘programmatic shift’ on the part of the international trade union movement – one that shifts the focus away from market-oriented ‘green growth’ toward a position anchored in the need to reclaim energy to public ownership and democratic control. It is time to start to explore ways to focus on the development of class-based policy commitments and clear programmatic content. Workers in fossil fuel industries, and their local communities, will need solidarity from all of us to secure a just transition to a fossil-free future – with secure, alternative jobs, decent wages and social security.

Because measures to combat climate change will require great changes in society, we face a major social struggle, a struggle on what kind of society we want. A narrow focus on environmental policy issues simply will not suffice. The climate and environmental struggle must therefore be put into a wider political context. A system critical approach is needed. Increasingly, our entire social model, the way we produce and consume, is under question. The way out of the climate crisis requires a system change and this can only be achieved if we are able to shift considerably the balance of power in society.

The trade union movement will have to play a decisive role in this struggle, because of its strategic position in society. However, trade unions are on the defensive all over the world and they are under immense pressure from strong economic and political forces. Despite the enormous shift in the balance of power which has taken place in favour of capitalist interests, most of the trade union movement has continued to cling to the social partnership ideology and social dialogue as its main method of influence – something which, for the time being, gives very few benefits to the trade unions.

In recent years many unions have made commitments to climate justice, but without a clear policy on energy (which is the main source of emissions and global warming) to accompany those commitments. This policy deficit is not just a problem for progressive unions, it is a problem for the entire international left. For example, progressive forces focus a lot on climate targets and timetables, demands for job creation, and all aspects of social justice, but much less attention has been directed toward developing the kind of policies needed to realize these ambitious commitments – and the mobilization of social power which is required to achieve them.

This fight against climate change is not an extra struggle that the trade union movement must take on in addition to fighting austerity and inequality. It is, and will increasingly be, an important part of the same struggle. If climate change is not stopped, or limited to the 1.5℃ or 2℃ target – which is within reach if we act rapidly and forcefully – it will actually become job-killer number one. It will destroy communities and lead to enormous social degradation. It will further redistribute wealth from the bottom to the top, hugely increasing poverty and causing emigration crises of unknown dimensions. Our struggle to avoid devastating climate change is therefore an important part of the interest-based struggle – the class struggle – over what kind of society we want.

For the trade unions, fighting climate change cannot be a question of sacrificing what has already been achieved. On the contrary, it is about creating a better society for everybody. Transition to an environmental, sustainable society has many advantages. Thousands of new jobs in public transport, renewable energy, house retrofitting and sustainable industry will be created. A reduction of greenhouse gases will also lead to less polluted workplaces and communities. Increased democratic control of the economy will reduce competition and pressure at the workplaces. The end of the over-exploitation of non-renewable resources will open the possibility of a radical reduction of working hours. Less stress, strain and mental pressure will be important effects of such a development.

Initiatives like the Trade Unions for Energy Democracy (TUED) and the Global Climate Jobs Network represent important developments in this regard. What we need now is broad coalitions of trade unions and allied forces willing to fight, a more radical agenda, more militancy and thus a growing pressure from below to ensure that the aims and ambitions set out in the Paris agreement can be realised. •