COP 27, which will meet from the 6th – 18th November 2022, unfolds against a backdrop of growing climate chaos and ecological degradation. As this latest Conference of the Parties (COP) approaches, economic recession, increased poverty and war run alongside the multiple interlinked and inseparable crises of climate, environment, extinction and zoonotic diseases. We now face a global economic recession likely to be deeper even than that of 2008.

The economic spiral into recession will make addressing environmental crisis even more difficult, as states and corporations rush to increase fossil fuel production to offset the deepening energy crisis. They will try to make working people pay with their living standards and their lives, for the crisis of their rotten system. Resources which should be directed at adaptation and amelioration of the climate crisis will be diverted to war and fossil fuel production including dangerous Fracking and Underground Coal Gasification (UCG).

We face increasingly destructive wars, most notably in Ukraine which is destabilising world food supplies, and which has the potential for the use of nuclear weapons. War causes huge physical and social damage to people and societies and the military industrial processes produce 6% of all greenhouse gasses. The impact of wars in Ukraine, Yemen, Palestine and other places in terms of human and environmental cost, and on food production and energy costs, will continue to exacerbate the crises facing the environment and the global economy. Russia’s invasion of Ukraine must not be the pretext for a rush to fossil fuels, new coal and gas and the resumption of fracking. Quite the opposite – it should be a spur to shift more rapidly toward renewables. 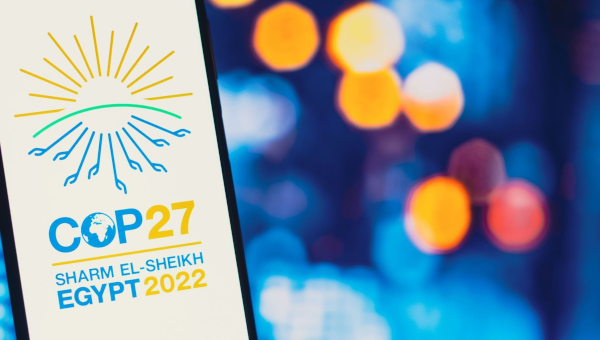 Another World is Possible

As Ecosocialists, we say another world is possible. A massive social and political transformation is needed, requiring the mobilization of the mass of working people, women and men, across the globe. Only the end of capitalism’s relentless pursuit of private profit, endless waste, and rapacious drive for growth, can provide the basis for a solution not only to climate change, environmental degradation, and mass extinction, but to global poverty, hunger, and hyper exploitation.

The COP 27 conference will take place in an isolated, heavily policed tourist resort, with only one major road in and out, and hotels charging rates that will likely push the entire COP beyond the means of many grassroots organizations, especially those from poorer countries in the Global South. The Egyptian government say there will be room for opposition, but what they mean, is that activists will be offered fake protests opportunities where state-affiliated NGOs demonstrate around the convention giving the impression of an independent local civil society. No real Egyptian or other opposition will be allowed near Sharm El-Sheikh. We send solidarity to Egypt’s climate campaigners, women’s organizations, Trade Unionists and workers fighting for democracy.

2022 has seen floods in Pakistan, directly affecting thirty-three million people, Australia and elsewhere. We have seen wildfires, extreme heat, ice melt, drought, and extreme weather events on many continents, yet governments pursue still more fossil fuel production. 2022’s summer of disasters broke records worldwide. In 2021, global sea level set a new record high and is projected to continue to rise. The United Nations reports that research shows that women and children are up to fourteen times more likely than men to die during climate disasters.

The big issues of climate change will be debated in Egypt but whatever is agreed, capitalism left to itself can at best mitigate, not end them. Environmental destruction is woven into the very fabric of the system itself. However, much big business resists, we will have to force it to act on a global scale. Ultimately, only the ending of capitalism itself and its replacement by democratic Ecosocialist planned production for need and not private profit can guarantee the necessary action.

Genuine climate solutions cannot be based on the very market system that created the problem. Only the organized working class, and the rural oppressed of the global south -women and men have the power to end capitalism, because their labour produces all wealth and they have no great fortune to lose if the system changes, no vested interests in inequality, exploitation, and private profit.

The long-term global crisis and the immediate effects of catastrophic events impact more severely on women, children, elders, LGBTQIA+, disabled people and the people of First Nations. An ecosocialist strategy puts social justice and liberation struggles of the oppressed at its core.

Migration is, and will increasingly be, driven by climate change and conflicts and resource wars resulting from it. Accommodating and supporting free movement of people must be a core policy and necessary part of planning for the future.

We demand a just transition:

As ecosocialists we put forward a vision of a just and sustainable world and fight with every ounce of our energy for every change, however small, which makes such a world possible. We will organize and assist wherever worker’s and community organizations internationally, raising demands on governments and challenging corporations. 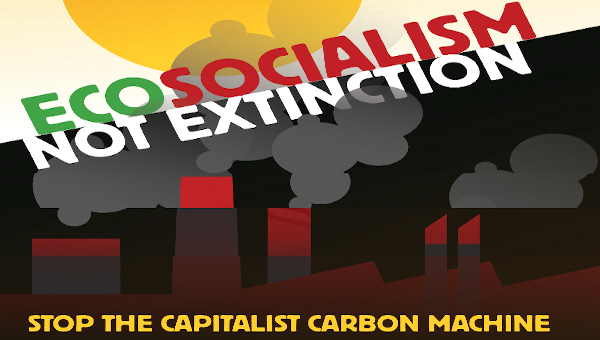 The Ecosocialist Alliance was initiated by Green Left and Left Unity in the UK, to call for ecosocialist solutions to global inequality and the ecological crisis, in the run up to COP26 in Glasgow, Scotland in November. It has grown rapidly with support from other UK groups and Ireland, Canada and the USA.