The Case for Free Public Transit in Toronto

Free public transit is a growing movement around the world. According to the book Free Public Transit: And Why We Don’t Pay To Ride Elevators, there are 200 cities around the world with some form of fare-free transit, and 97 that are completely fare-free.

Tallinn, the capital of Estonia, implemented free transit in 2013, and it was adopted nationwide last year. Luxembourg is another country where transit is free. The idea has also gained traction in the United States. Kansas City is set to become the first major city in North America with free public transit. On December 5, their city council voted unanimously to eliminate bus fares. 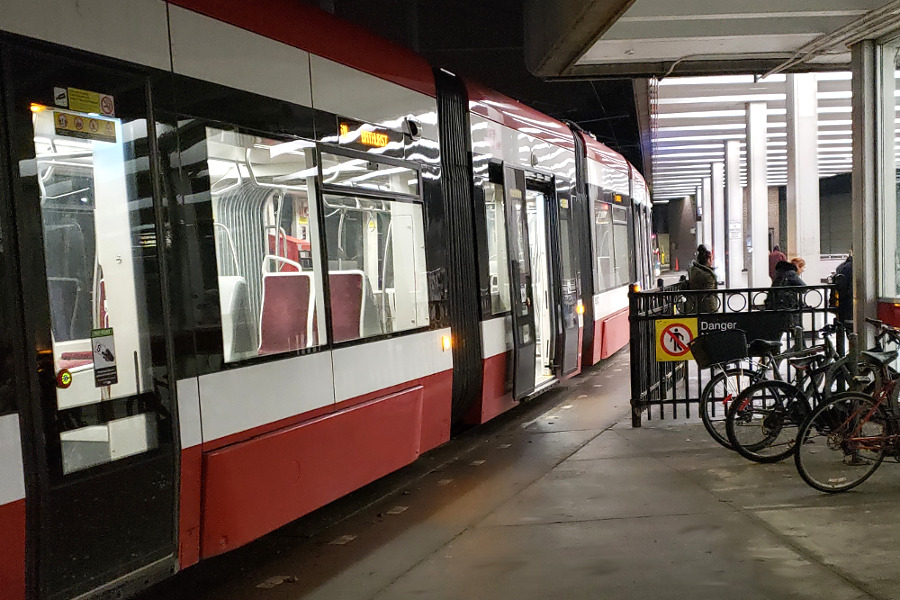 Fare-free transit makes sense. Basic mobility is essential for all people for work, household tasks and broader participation in society. Transit should be accessible to all as a public service. After all, we don’t charge user fees for libraries, parks, schools and healthcare. Moreover, the urgency of the climate crisis demands bold action. Encouraging public transit use would ease congestion and make our streets safer.

In an increasingly expensive and unequal city, abolishing fares would also greatly improve the quality of life for poor and working-class Torontonians for whom the cost of public transit represents a serious economic hardship. The money currently being spent on fare enforcement could certainly be put to better use.

While transit advocates have historically prioritized improved service over abolishing fares, the two are intertwined. Expanding the transit network, particularly into underserviced neighbourhoods, will create quality jobs and add to the tax base.

Right now, there is little political support for abolishing transit fares in Toronto. Josh Matlow is the only city councillor on record to support the idea.

But in July, CUPE Local 2, which represents Toronto Transit Commission (TTC) electrical workers, came out in favour of free transit. The NDP pledged to support cities interested in moving toward fare-free public transit in the recent federal election. And Michael Coteau, who is running for the Ontario Liberal leadership, has called for the elimination of transit fares in the province within a decade.

It’s certainly true that free public transit is an expensive proposition. Paying for it will require a dramatic shift in political priorities. The Mike Harris government’s cut to the provincial operating subsidy two decades ago – which paid for half of the operating costs – has devastated the TTC. As a result, the transit system is now the least subsidized in North America, with 70 per cent of its operating costs paid for by fares.

How Would We Pay for Free Transit?

The $1.2-billion in lost revenue would have to be made up. And that’s not including the cost of expanding the system to accommodate an increase in ridership.

The downloading of operating costs by the provincial government would have to be reversed. Free Transit Toronto is calling for a massive increase in federal and provincial funding financed by a more progressive tax system. Re-allocating provincial spending on highways would help. There is room to contribute at the municipal level as well.

Despite Mayor John Tory’s recent pledge to increase property tax rates to pay for much-needed services, more can be done. A congestion charge and a parking levy, for example, are permissible under the City of Toronto Act. In addition, the city could cut the ever-increasing police budget and abandon the Gardiner Expressway extension.

Free public transit is attainable. The city has already eliminated fares for children 12 and under, and it has been a huge success.

It doesn’t have to happen all at once. Free Transit Toronto is calling for the gradual elimination of transit fares over time, beginning with seniors, people on social assistance and the unemployed, as well as during extreme weather alerts (Paris already does this). In addition, the group stresses the need for public ownership of all transit services.

With free public transit, we can tackle climate change and growing inequality and create a more livable city. •

This article first published on the NOW Magazine website.

Saron Gebresellassi is a human rights lawyer. Matt Fodor is a Ph.D. candidate in political science at York University.

Edmonton: Make Transit Free for the Sake of our Climate and Community

We’d never be expected to write a firefighter a cheque before they put out a burning building. Why is public transit any different? As organizers for Free Transit Edmonton, we have a vision for a resilient, more connected city. We see free public transit as a way to address inequality, and climate change in a way that benefits all Edmontonians.

Over 100 municipalities are exploring new ways to fund this essential public service without collecting fares from users. Why not Edmonton? 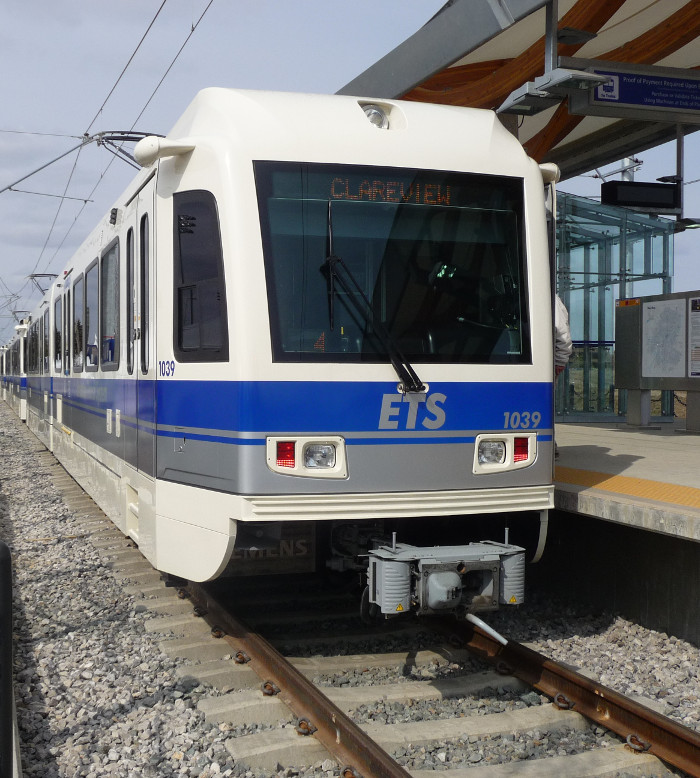 We want to see this bold policy enacted in our city for racial, social, economic, and climate justice. Making Edmonton Transit Service (ETS) free will create well-paying, permanent jobs, that strengthen and expand our transit system so that it becomes the most convenient, reliable, and accessible way for Edmontonians to get where they need to go.

We commend city council for declaring a climate emergency on Aug. 27, and for taking initiative in Alberta’s hostile political climate to recognize the urgent threat posed by catastrophic climate change.

However, Edmonton has the highest per-capita emissions among major Canadian municipalities. Without decisive action to enact policies that will lower the city’s carbon footprint, what does this emergency declaration amount to?

When council met on Nov. 18 to discuss their fare policy report, we took the opportunity to advocate for our proposal. It was disappointing to see that most committee members weren’t ready to take the idea seriously. They pushed for us to make a quick decision – good transit or free transit? We reject this “choice.” We need both.

We know that running and expanding a transit system costs money. Through modest increases in property taxes, along with small municipal levies on things like ride-share programs and business licences, we can create a system that works for everyone. Without it, council is dooming its stated goals of improving transit ridership, tackling poverty, developing a green economy, and addressing climate change.

Investing heavily in transit infrastructure to create an expanded system that does not rely on ridership fees would incentivize more people to use the service, and facilitate a reduction in personal vehicle trips, thereby reducing congestion and carbon emissions.

Access to transit is one of the most important factors in alleviating urban poverty. Studies show that access to reliable transportation is the most significant contributor to economic mobility. People need to be able to get to job interviews, and have access to well-paying work. For people living in food deserts across Edmonton, access to good, free transit means access to nutritious food. With the precarious nature of our economy, people cannot afford to be stranded.

The systemic poverty and lack of access to free public transportation has an added destructive effect on Indigenous communities. Indigenous riders are disproportionately ticketed for fare evasion, and these tickets can snowball into other interactions with the criminal justice system. The National Inquiry into Missing and Murdered Indigenous Women and Girls also identifies lack of transportation as a critical factor in endangering Indigenous women. Making transit fare free would be an enormous step in making our community safer and more accessible to everyone.

Eliminating fares would also make the job safer for transit operators as most assaults on operators arise because of fare disputes. We are disturbed by the city’s recent directives to cut routes and privatize aspects of riders’ commutes. Expanding our transit system will also mean more well-paying, green, unionized jobs.

It is clear that access to good transit should be considered a universal right. If our roads are financed with taxpayer money, the services people use to traverse them should be fully public.

Evidence from Edmonton’s previous fare increases demonstrates that raising fares to fund the system prices people out of using the service. The City’s own numbers show that the last time they raised fares in 2016, the city estimated that over 400,000 fewer rides would be taken and their projections show that an additional increase to $4 in 2021 from the current rate would decrease yearly rides by 280,000.

In a city that already suffers from chronically low mode share for transit, this is not just counterintuitive, it’s setting us up to fail on increasing ridership and decreasing emissions.

Edmontonians deserve a transit system that they can rely on. As we move towards a just, green future, let’s make fare-free transit the reliable, accessible option. •

This article first published on the Edmonton Journal website.