In 2019, the now 187-member International Labour Organization celebrated its 100th anniversary. As one of the oldest agencies of the United Nations, the ILO used the occasion to renew calls for improved opportunities and working conditions, social protections and collective bargaining rights. The ILO’s Global Commission on the Future of Work (2019, 2) proposed a “human-centred agenda for the future of work that strengthens the social contract by placing people and the work they do at the centre of economic and social policy and business practice.” 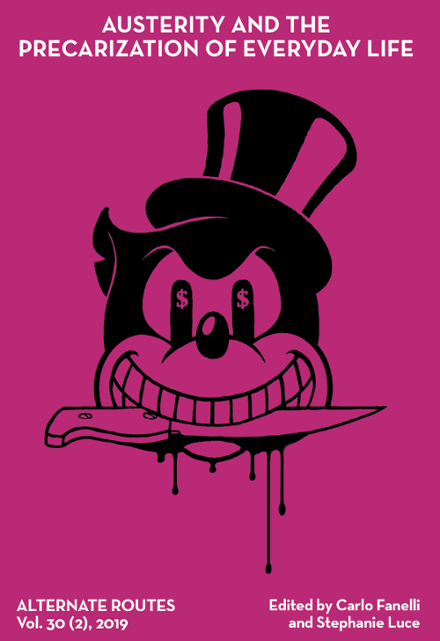 Because the world of work begins at home, this included calls for new investments that more evenly distribute unpaid care work, from parental leave to public care services, thereby genuinely increasing opportunities in the workplace; universal entitlements to lifelong learning via active labour market policies that provide opportunities for re/upskilling; proactive universal social protections that support people’s needs over the life cycle; new investments in the institutions of work, from regulations and employment contracts to collective bargaining and labour inspection systems; expanded “time sovereignty,” that is, the right to disconnect from work and greater autonomy over working time; and harnessing technology – artificial intelligence, automation and robotics – in a manner that prioritizes human well-being, regulates data use and algorithmic accountability in the world of work.

The Commission (2019, 3) also called for establishing a Universal Labour Guarantee: “All workers, regardless of their contractual arrangement or employment status, should enjoy fundamental workers’ rights, an ‘adequate living wage’ (ILO Constitution, 1919), maximum limits on working hours and protection of safety and health at work.” They stress urgent action is needed to develop national strategies on the future of work and transformative investments that meet the challenges of climate change.

There is a vast gap between this call for living wages and fundamental rights, and the reality most workers face in the workplace. For decades, employers have been attempting to increase profit margins by re-organizing work. This includes subcontracting, offshoring, converting full-time jobs to part-time and temporary, and reclassifying direct employees as independent contractors. This is what economist David Weil (2014) calls the “fissured workplace.” They have introduced new technologies to cut jobs and adopted “just-in-time” scheduling practices to more precisely adjust work hours. In some fields, like healthcare, workers are forced to work long hours and double-shifts. In others, such as retail, employees often do not have enough hours of work and may even have to compete with other employees to get assigned shifts (Clawson and Gerstel 2014, Lambert, Haley-Lock, and Henly 2012).

Employers have been able to pursue some of these strategies due to neoliberal reforms which deregulate industries and labour laws. Indeed, ‘labour flexibility’ is a key plank of a neoliberal platform. Employers and policymakers have worked hand-in-hand to rewrite laws and regulations; the result is greater rights for employers and investors, and fewer rights for workers (Luce 2014). Finally, employers and their associations have in many countries actively worked to weaken labour unions. The ‘union-avoidance’ industry began to flourish in the United States in the 1970s and eventually grew into a multi-billion dollar international industry (Logan 2006). The result has been declining union density in most industrialized countries.

A recent ILO Brief (Xhafa 2018) finds that Canada failed to crack the top twenty countries when it comes to the rate of collective bargaining coverage as a proportion of total employment. At 27 per cent, Canada finds itself in a category of medium-to-low levels of collective bargaining coverage with Japan, South Africa and the United Kingdom. Collective agreements extend the rule of law to the workplace (Doorey 2017). They afford workers certain rights and place limits on the arbitrary power of employers, like grievance-arbitration mechanisms that give workers rights like due process and fair treatment, not available to other workers except via the courts. And because unions raise wage and benefit floors these gains are undoubtedly one of the main reasons why unions have historically been opposed, and continue to be opposed, by employers and governments. Unions also create a presence in local labour markets or sectors – “spillover effects” – that can create pressure to raise wages in surrounding non-unionized workplaces. This often compels employers to adjust wages to remain competitive in labour markets, often to stave-off unionization efforts.

Aside from the socio-economic advantages to being unionized – higher wages, pensions and benefits, job security, training, transparency and due process – organized labour has a long history of shaping social policy in the interests of working class communities and strengthening the social wage – public services or benefits that people receive in supplement of their wages earned from work and paid for by redistributing wealth through the tax system (Himelfarb and Himelfarb 2013). Compensation in unionized workplaces tends to be more equitable overall, with relatively higher wages for lower paid workers and less of a wage gap for women, younger workers and racialized groups. Unionized workers are also more likely to be full-time, permanent and to work longer for their employers. Finally, unionized environments tend to be safer, with lower rates of critical injuries, mobility impairments, lost-time due to injury claims and broader support services.

Unions are also able to exert political pressure outside the workplace, such as raising a series of demands for pay equity and equal pay for work of equal value, the undervaluation and occupational segregation of women and other groups, struggles for changes to human rights legislation, and same-sex spousal benefits. As Susan Hayter and Jelle Visser (2018: 4) have argued: “It was considered desirable that the norms and rules negotiated between organized employers and the union(s) be made generally applicable.” In neoliberalism’s wake, that is no longer the case, if it ever was.

In the United States, the patterns are similar. Today, 14.7 million workers belong to unions. Union density peaked in 1955 at 35 per cent and has been on the decline since, though that hides certain interesting patterns. Public sector density was at 33.9 per cent in 2018, compared to just 6.9 per cent in the private sector. And like Canada, public sector members outnumber that of the private sector. National density figures mask tremendous variation between states. In fact, over half of all union members live in just seven states: California, Illinois, Michigan, New York, Ohio, Pennsylvania, and Washington (US Department of Labor 2019).

Union density figures may reveal the extent of potential union organization, but it is also illustrative of the ways in which organized workers have been able to effectively reduce inequality, improve working conditions and widen income distribution through wider bargaining coverage and coordination. Advancements for workers via collective bargaining are illustrative of capitalist class concessions fought for and won over the course of intergenerational class struggles, not privileges bestowed by employers or the benevolence of the state. The growing spread of low-waged work has occurred in tandem with stagnant union growth, aggressive anti-labour legislation and drastic expenditure reductions in general government spending and public services – that is to say, austerity without end (Evans and Fanelli 2018; Albo and Fanelli, 2014;).

“While the loss of heavily unionized manufacturing jobs has been a contributing factor in the declining private-sector unionization rate in [the US and Canada], it would be a mistake to place too much emphasis on this in and of itself because it cannot explain the inability of workers to realize their desires for unionizing the new jobs they have moved into. Instead, in both countries, the increased ability of employers to effectively oppose unionization offers a more compelling explanation. In the United States this has been a long-standing issue, while in Canada it is a relatively newer phenomenon, related in large part to a change in the way unions can be formed.”

Though variegated in form and function, the state has often been the chief architect of neoliberalism’s anti-labour reforms: at times imposing austerity from above or leading the charge from below, and at other times created the conditions for capital to lead in an assault against working class institutions. The results have been a continued decline in real wages and the erosion of the total labour share of wages. In contrast to the postwar class compromise, the ability of organized labour to help secure increases in social spending, impart political pressure for more progressive taxation and improved equality for all workers is at an impasse. Should the trendline continue, this could have significant implications for labour in an era of authoritarian neoliberalism and amid the resurgence of radical right-wing populists (Thomas and Tufts, 2016; Greenhouse 2019; Albo et al., 2019).

The mutual relationship between higher rates of unionization and increased democratic participation has received consistent empirical support (Sojourner 2013). As Alex Bryson and colleagues (2014) have recently argued, union members have historically been more likely to participate in general elections than non-members, cultivating a broader civic culture and participation in democratic politics. Union members are also more likely to vote and engage in a range of pro-social civic behaviours, including the signing of petitions, attending public meetings and/or volunteering for political parties. Consistent with previous research, Bryson et al., have noted that the wider decline in civic engagement is also coincident with the decline of trade union density and larger collective disengagement from formal political participation. In other words, democratic governance at work in the form of higher rates of unionization tends to contribute to a life-long attachment to democratic politics outside of it. With union density stagnant or shrinking across much of North America and Europe, the democratic implications of rising low-waged work and political polarization has emerged as a significant political concern.

While challenging the ‘common sense’ of neoliberalism is important and necessary, so too is confronting the wider capitalist context that leaves workers dependent on the imperatives of capital. In this regard, unions are paradoxical institutions, simultaneously advancing workers’ interests but rarely challenging the prevailing power relations at work (Fanelli and Noonan, 2017). As James Rinehart (2006, 203-4) has noted, while unions might nibble away at the margins of power, they do not alter the subordination of labour that lies at the root of capitalist class power. Of course, unions remain one of the few mechanisms through which workers can affect change inside and outside of their workplaces. But if trade unions are to deepen and extend their political influence and organizational capacities, it is incumbent on a wider revitalization of working-class politics, like movements for living wages embody (Evans et al., n.d.; Luce 2017).

The welfare states of the postwar era were only possible because millions of people demanded change. If labour is going to break from its political paralysis it is dependent upon a wider renewal of a politics left of social democracy – a spent force increasingly an impediment to, rather than an instrument of, progressive politics – and rooted in an intersectional class politics that prioritizes building new institutions, engaging in direct action, running for office, organizing in our workplaces and communities. In other words, a politics that confronts both the authoritarian/anti-democratic politics of the right and transcends the debilitating “post-politics” of radical centrism (Mouffe 1998). Liberal democratic capitalism is losing legitimacy. But what comes next may be a form of right-wing populism, supported by nationalist politicians and movements looking to close borders and blame immigrants and trade for economic insecurity. Will unions look to protectionism or internationalism? Will working class movements be able to unite across borders to radically shift the balance of class power relations? •

Stephanie Luce is Professor of Labor Studies at the School of Labor and Urban Studies, and Professor of Sociology at the Graduate Center, City University of New York. She is the author of Fighting for a Living Wage, and Labor Movements: Global Perspectives.