The Palestinian Boycott, Divestment and Sanctions National Committee (BNC), the largest coalition in Palestinian society, shares the shock and anger of Kashmiris and democratic forces in India and across the world over the authoritarian decision of the Bharatiya Janta Party-led (BJP) Indian government to effectively nullify overnight the relative autonomy of the state of Jammu and Kashmir. We denounce the increasing use of Israeli-style paradigms and policies by the current Indian government. 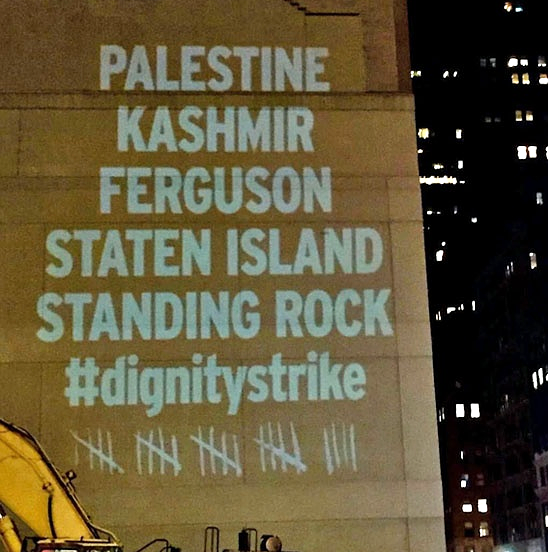 Introducing through presidential decree legally dubious changes to the Indian constitution, the right-wing government in Delhi has further undermined the internationally-recognized rights of the people of Kashmir, particularly their right to democratically decide on their future, without their knowledge or consent.

The Indian government imposed this decision on the 5th of August while keeping Kashmir cut off from the world, with its phone lines and internet shut down, its political leaders placed under house arrest, and its streets under a strict curfew enforced by a massive deployment of the army, paramilitary and police forces.

The Kashmir valley was already among the most militarized zones in the world, and now close to a million armed personnel are deployed there to impose the writ of the government. The curfew and communication blackout are still in place, over a week later. On Friday, the first reports of massive protests in Srinagar came in, with the use of teargas and live rounds of gunfire by Indian security personnel reported. Visiting journalists met victims with pellet gun injuries in hospitals, some of whom were going to study or were making bread in their shops when shot.

The history of atrocities and human rights violations are not new to Kashmir. Human rights groups have recorded extrajudicial killings, arbitrary detentions, torture, rape, enforced disappearances, mass blindings and suppression of protest and democratic expression, along with legal immunity to armed forces for over 30 years. Kashmir has been projected as a contention between the two nuclear armed states of India and Pakistan and never as a people with their own aspirations and UN-stipulated rights.

As recently as 2018, the Office of the United Nations High Commissioner for Human Rights released a comprehensive report on the situation in Kashmir demanding access for an independent inquiry, which India rejected as a “false narrative.”

As Palestinians, we deeply feel the suffering of the people in Kashmir under military repression that in so many cases is similar to Israeli forms of subjugation and control. Today, the Modi government has literally taken inspiration from Israel’s settlement project to enable forced demographic changes on the ground. The constitutional changes introduced by the BJP government scrap the ability of the state of Jammu and Kashmir to make its own laws around property, employment, residency, etc. With this provision gone, and New Delhi already inviting private investment, the demographic nature of the region is set to be permanently altered, drawing on the Israeli example of creating ‘facts on the ground’ through illegal colonial settlements in the occupied Palestinian territory.

Taking inspiration from Israel’s settler-colonialism is only the latest in Modi-led India’s deepening relationship with and admiration for apartheid Israel. As we have observed over the years, India is borrowing Israel’s methodology and ideology and using Israeli weapons in its control over Kashmir. In 2014, the BJP government’s then home minister Rajnath Singh visited Israel and said he was “impressed” by the electronic fence that maintains the blockade on two million Palestinians in Gaza. A similar fence is already being deployed along the Line of Control between India and Pakistan. India is the world’s largest importer of Israeli weapons. The Tavor rifles, the very symbol of the military jackboot in the Kashmir valley, and the drones that India deploys to control the region are Israeli-made. Israeli military delegations have been visiting Kashmir to train Indian troops.

Benjamin Netanyahu is set to visit India again in September, and major arms deals will be back on the table, as they were in the previous meeting. The Israeli weapons that India uses to oppress Kashmiris have been ‘field-tested’ on Palestinian bodies.

Our campaign for a comprehensive military embargo on Israel, therefore, is directly linked to opposing global militarization, including militarization of Kashmir.

In this grave moment today, we stand in solidarity with the people in Kashmir. In India and across the world, conscientious forces are opposing this move that abrogates the limited autonomy of Jammu and Kashmir. We must not remain silent on this historical injustice that the BJP-led government has brought upon Kashmir. Our oppressors are united, and our struggles will be stronger if we too unite.

We call for international pressure on the government of India to reverse its latest measures that violate the rights of the people of Kashmir under international law and to recognize and respect those rights. We appeal to the people of conscience in India, whose leaders once spearheaded the global non-aligned movement and the fight against apartheid in South Africa, to work toward ending India’s military and security alliance with Israel. This would not only end India’s shameful complicity in Israel’s suppression of Palestinian freedom, justice and equality, but would also benefit the struggle for the rights of the people of Kashmir, as well as the social and economic justice struggles of the people of India. •