Did Unifor President Jerry Dias make a deal to save the Oshawa plant, or did he give in and accept GM’s determination to end vehicle production in Oshawa?

Just before Christmas last year, GM announced their intention to close Oshawa, meaning the loss of 5,000 direct jobs involved in the assembly of cars and trucks, with a much larger impact on the community of Oshawa – an overall loss of 20,000 jobs.

GM claimed that 2,600 jobs were affected when they announced the closure, and the media has used that figure ever since. But GM knew that they were taking jobs away from 5,000 workers whose jobs are directly part of the assembly of vehicles in Oshawa. It has been GM’s deliberate policy over the years to outsource as much of the work as possible to third-party supplier companies – to force wages and benefits down. Now GM will claim no responsibility for those workers when they leave town. Many of those outsourced jobs are right inside the Oshawa plant – building services trades, cleaners, workers who sequence and deliver parts, security, the tire room. Others are nearby – including workers who make foam and manufacture seats, and other parts suppliers. At one time all of those jobs were done by workers who were employed directly by GM, and had the same wages and benefits as other GM assembly workers. Now they make less than second tier assembly workers, have inferior benefits, and most have no pensions. And almost all of them are members of Unifor – but has Jerry done anything for them?

From “Save the Plant” to “Keep a Footprint”

Jerry Dias vowed to fight to keep the plant open. He hired an expensive public relations company, whose strategic brilliance included a “Tree of Hope,” and an ad on the Super Bowl broadcast, rather than relying on workers’ actions. After several months, the “fight” became reduced to talks with GM to maintain a “footprint” and save “as many jobs as possible.”

Finally, on May 8, the deal was announced – only 300 jobs would be saved – that is only 6% of the 5,000 jobs left in Oshawa. And 300 is just 1.5% of the 20,000 jobs that were in Oshawa not too long ago. Those 300 jobs will be reserved for direct employees of GM. Senior GM workers will be offered retirement or severance incentives. Workers hired by GM since 2006 fare worse – they only get credit for time worked since 2016 to qualify for incentive packages. For the 2,500 workers at supplier companies the deal provides zero jobs, zero incentive packages, zero severance beyond the bare minimum provided by law. Yet, they are Unifor members too. They are workers too.

Here are some of my impressions of the deal and how it was announced. 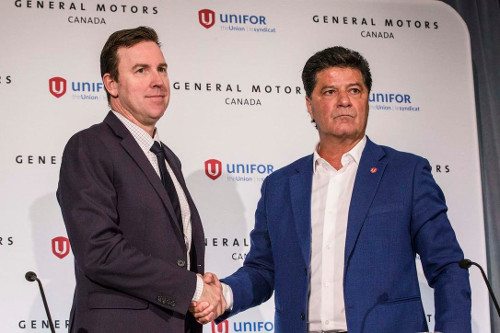 Jerry Dias did not meet with the workers affected by the plant closure to let them know what was in his deal with GM. Instead, he took part in a joint press conference with GM of Canada President Travis Hester on May 8 in downtown Toronto. The backdrop featured the logos of GM and Unifor as though the organizations were partners, and the whole set-up was clearly designed to try to rescue GM’s damaged public image. Jerry was on a first-name basis with Hester, while the workers suffered the indignity of learning about their fate by watching the press conference.

Holding the press conference far away from the workers, who would know how hollow the ‘victory’ was, served a very damaging purpose – it left the public with the false impression that the plant has been saved.

During the Toronto press conference, Jerry praised GM for promising to keep 300 jobs in Oshawa, and said “I’m content that we have established what I believe to be a business plan for the long term.” The workers in Oshawa who are losing their jobs are a lot less content. 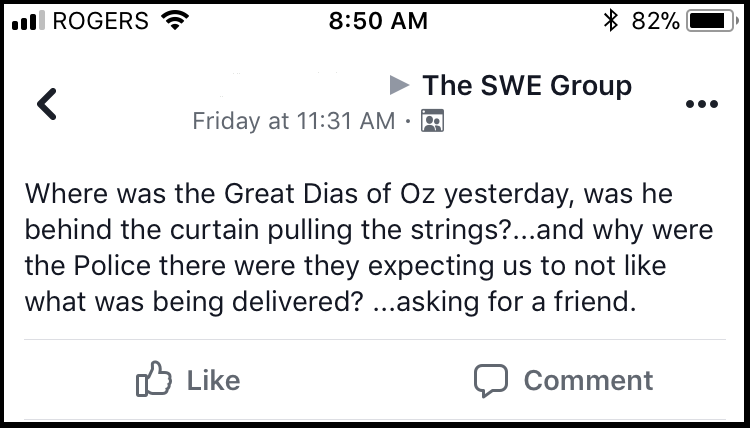 When meetings were held with the members the next day, on May 9, Jerry Dias did not even bother to show up. That is really adding insult to injury. The post on the right shows the reaction of one Oshawa worker.

It wasn’t until the meetings on May 9 that we got more details about the 300 jobs. The jobs will be in the Oshawa Stamping Plant, a small part of the GM complex, and GM’s only commitment is to have the jobs in place by the end of the 2020 calendar year. Our leadership expressed faith “that most of them would start … in the second half of the year.” Since vehicle production will be done in December, 2019, this means that people who apply for the 300 stamping jobs could be on layoff for 6 months or more before they start. I asked at the meeting if there was any guarantee that the jobs would last past the expiry of our contract – September 21, 2020. The short answer was “No” – there are no guarantees, of course. When the contract expires, everything has to be renegotiated. If GM announces next year that they have changed their mind, or that “conditions have changed,” there could be no jobs at all.

Why Should We Trust GM Now?

The deal that has been reached depends on GM’s good will – which means it is worth nothing. GM has promised 300 jobs – but they have until the end of 2020 to deliver them. And that is after the expiry of Unifor’s collective agreement. Why should we take GM’s word now, when we have already seen what their promises in 2016 were worth? This deal provides very little for the 2,500 GM workers. It provides nothing for the 2,500 workers at supplier companies. Most importantly this deal provides nothing for the community – no jobs for the future, and the loss of important manufacturing capacity for Oshawa, Ontario and Canada. GM is already taking inventory of the equipment they are going to take out and relocate or sell.

The only realistic way to prevent the dismantling of the Oshawa complex, and the bulldozing of the plant buildings to make space for condos and big box stores, would be for governments to step in and save the manufacturing capacity, and repurpose the plant for electric vehicles, public transit, and renewable energy products. We desperately need that bold action by government anyway to meet the current climate crisis. What better place to start than in Oshawa? If we leave it up to GM, they will put their profits first, and the public interest last. We can’t accept that capitalist cold-hearted logic.

The aerial view shows that GM’s plans will at best keep jobs in a small corner of the Oshawa manufacturing complex – the Stamping Plant outlined in red. All of the automation, robots, technology and equipment used for the assembly of cars and trucks is in the buildings outlined in black – and they will all be empty. We need to force governments to act now, or it will be too late. Can this be done? As veteran union activist Sid Ryan posted recently on Facebook:

“One of those alternatives was to push these governments to consider public ownership (nationalize) the Oshawa facility and to repurpose it. After all, the federal and Ontario governments had no problem pumping billions of dollars into GM during the 2008/09 financial disaster brought about by pure greed on Wall St. Why was it ok to hand over taxpayers money to wealthy corporations to enhance their profits in 2008/09 but not do so today to save workers jobs by nationalizing the plant? Furthermore, the federal government had no problem investing in repurposing the Oshawa plants during WWII to churn out military vehicles. Why not now invest in the plant and its workers to design and build electric vehicles, buses and rapid transit systems as just one option?”

The Canadian Union of Postal Workers has called for the replacement of the entire Canada Post vehicle fleet with electric vehicles assembled in Canada. [See video of “Nationalize GM/Oshawa Green New Deal” public forum.] That could be the ideal start for a publicly owned manufacturing centre in Oshawa, and the kickstart to a greatly needed Green New Deal. •