The Iranian workers’ movement dates back 120 years. One of the earliest strikes involving eleven thousand oil industry workers took place sometime between 1923 and 1930. This strike was organized by the first Communist Party of Iran. Reza Shah, the father of the late Mohammad Reza Shah, even with his relatively strong army, could not suppress the strike. He had to ask for the help of the English Royal Navy to do so. The workers’ movement had also raised the cry for the nationalization of the oil industry before it was nationalized by the Mohammad Mosaddegh and his National Front organization. 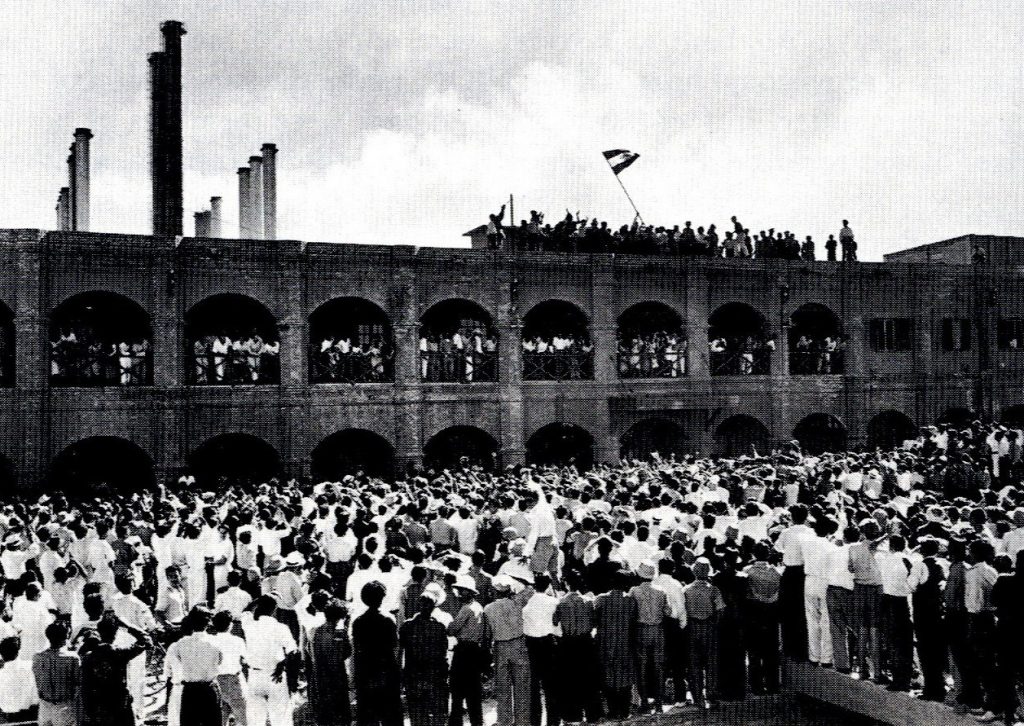 Between 1948 and 1951, almost 360,000 workers of the half-million worker population were part of what was called the All-Union Council, and that was one of the reasons that Iranian workers were able to impose one of the most progressive labour laws in the entire Middle East region on the government of the time and a capitalist regime in making.

After the CIA-sponsored coup d’état in 1953, which led to the removal of Prime Minister Mosaddegh and the establishment of a military government for a few years afterwards, the Iranian workers’ movement encountered a decline in syndicalism, in the number of strikes, and in major struggles. However, some strikes and protests, radical in nature but mostly diffused, did occur. The protests by workers of the textile factory Chit Sazi Rey or by the traditional brick factories are good examples.

It was not until 1978 and 1979 that the worker’s protests and struggles reached new heights. This was shortly before the 1979 revolution. The workers’ actions, especially of the oil industry workers, were a powerful determining factor in toppling the Shah’s regime in the revolution of 1979. In fact, the workers continued to struggle for almost a year and half after the Shah’s downfall. During this period, Iranians experienced a relatively open society and a significant level of freedom for the press! But soon, the Mullahs’ regime was able to consolidate its power and initiated one of the most brutal attacks ever in Iran on the workers’ movement and their standard of living.

Under the pretense of anti-imperialism, the reactionary Mullahs’ regime was able to exert a high level of oppression upon the workers’ movement. This was due to the support of the Soviet Union, and the international Left/Workers’ Unions which was under the influence of that regime and its foreign policy.

The 1980s was the worst decade for the workers’ movement in Iran. Severe repression led to the Iranian labour movement’s loss of almost all its organizational capabilities and strengths. Nevertheless, the struggle continued, but in a very scattered manner. This included the strikes by the Kafsh Meli factory (National Shoe Factory) and the Akbar Abad, and the Khatun Abad uprisings.

As time has passed, there has been an increase in the worker’s population. Therefore, the workers’ struggle has gained new momentum, mostly in the factories but also in the service industry. Some examples are the textile industry companies Par Ris, Naznakh, Meh Nakh, Nassaji Mazandaran and Harir Kashan; the petrochemical industry in the southern region; the tractor industry company Tractor Sazi Tabriz; and the coal mining companies of the northwestern region of the country. The protests have intensified in the industrial complexes of Alborz, Qazvin, Saveh, Arak, and Ahwaz; in the pipe-making industry in the southern province of Luleh Navard Ahvaz, Safa; and in the central region’s Saveh.

Moreover, in the northern region, strikes have taken place in the wood industry of Chub Neka in the northwest province of Iran. In Tehran, since 2004, there have been continuous strikes by bus drivers, as well as by truck drivers. And last but not least, the more recent and powerful strikes have been by the sugar factory Haft-Tapeh and the steel factory Folad Ahvaz. Since 2017 alone, more than 7200 strikes and protests have been recorded, reflecting the severity of the Iranian workers’ situation and the magnitude of the militancy of this class at the present time.

The Workers’ Present Situation and the Islamic Republic of Iran

Over the past 15 years, thousands of workers have been arrested and imprisoned, and of those, hundreds have been subjected to torture. Many have been executed. In one case, at Khatun Abad, workers were shot from the air from a helicopter. At the present time, 700 workers are under arrest in Tehran alone.

The Mullahs’ regime prosecutes workers, mostly without the presence of lawyers, and workers are tortured into confessing in writing or are brought onto TV shows to declare their allegiances to foreign powers such as the USA, Israel, or Saudi Arabia, countries accused of attempting to overthrow the Iranian regime. The most notable case is that of Ismail Bakhshi and Hanfari, the worker representatives of Hafth-Tapeh sugar factory and the Ahvaz Steel factory respectively.

In terms of the labour laws, those in place before the revolution are being reversed. Workers, who had some degree of protection under the so-called ‘welfare state’ of the Shah, are losing those protections now at a steady rate. The employment law referred to as ‘white contracts’, allowing employers to fire workers with minimal compensation, was never heard of before in Iran, but is now omnipresent in most employment contexts.

Another innovation in the Islamic Republic of Iran is the requirement to work for free for the first three months of employment. After three months, the employer decides whether the worker will be kept on or dismissed. Often, for jobs that require minimum training or skills, employers hire dozens of workers, only to let them go after three months, having paid almost nothing for their labour, and then the employer restarts the cycle with a new set of workers.

On the national unemployment front, more than 8 million young people are unemployed and more than 30 per cent of the employed are subject to being laid off. According to the Iranian Ministry of Labour and Welfare, 93 per cent of workers are employed under temporary contracts or under what was mentioned earlier, ‘white contracts’. The official unemployment rate for young people seeking employment stands at 26.7 per cent, but many other independent sources believe the figure is higher than this, perhaps over 30 per cent.

The Islamic Republic is itself a direct employer through its ownership of the state factories and in many statesmen’s role as employers and capitalists. Many of the statesmen are owners of corporations, financial institutions, and manufacturing and service companies. Most of the high-ranking military personnel of the revolutionary guards are part of the ruling class who directly employ workers or benefit from rents imposed on the industrial complexes and factories.

Due to its severe repressive measures, the Mullahs’ regime has been able to destabilize all levels of demands by the working class. The extent of this is probably unimaginable for people living outside Iran. For instance, who can imagine that some workers have not been paid for over six months or even a year? We don’t know of any other country in which this could be the case.

The international Left, and many revolutionary socialists’ groups, with the exception of a few very small groups, have turned their back on the repression of the workers’ movements in Iran. They have given support to the Mullahs’ regime. The international Left did not understand what was happening or the nature of the Iranian regime. This confusion still continues. Many in the international Left think, or rationalize, that, for instance, because someone like U.S. President Donald Trump supports the protests and claims solidarity with the people’s struggle in Iran, a strategy of silence about the Mullah’s regime is justified or even support of it under the so-called ‘critical support’ category!

But by now, after forty years, it is clear that the Islamic Republic of Iran is part and parcel of international Capitalism. It is a regime that has been selected as one of the top reformers in ‘structural adjustment’ and the adoption of neoliberal policies by the IMF and WTO. It is a regime that has been capable in such a short period of time of reversing the labour laws in a country that had some of the most progressive laws in the region. Seriously, can this regime be called anti-imperialist?

If there are still any doubts in the minds of the international Left or revolutionary socialists about the nature of this regime, we need to hear their rationale.

What is urgent now is a call for international solidarity with the new wave of working-class protests and strikes that is sweeping through Iran’s many cities. The working class of Iran has a long tradition of militancy and internationalism. Now, it has been badly suppressed by a reactionary theocratic regime. True, the working-class movement lacks coherent organization to advance its demands, let alone to have a party to organize their movement in order to put real pressure upon the regime at the moment. However, anyone who wants to do some research on the present situation of the working-class movement in Iran will find that there is an enormous potential to organize and create a solid opposition to this reactionary regime and even topple it. And become a real alternative not only to the Mullahs’ regime but also with far-reaching impact on the region, perhaps as far as Iraq, Turkey, Greece, and even Southern Europe! •

There are many socialist and union groups in Iran trying to rebuild the Iranian workers’ movement. First Step is one such group campaigning for the creation of a revolutionary workers’ party in Iran. The majority come directly from within the workers’ movements in Iran. They would like to reach out to as many grassroots organizations and revolutionary socialist groups as possible in Canada and around the world, to make the struggle of Iranian workers heard and to expose the real nature of the repressive Islamic Government of Iran. First Step can be contacted at: Pishnahad2014@gmail.com.