The group that will do the best out of the recent provincial Budget are the doctors. According to the just released Budget Estimates, OHIP funding (which goes overwhelmingly to physicians and practitioners) will go up $1.2-billion or 8 per cent compared to last year’s Estimates.1 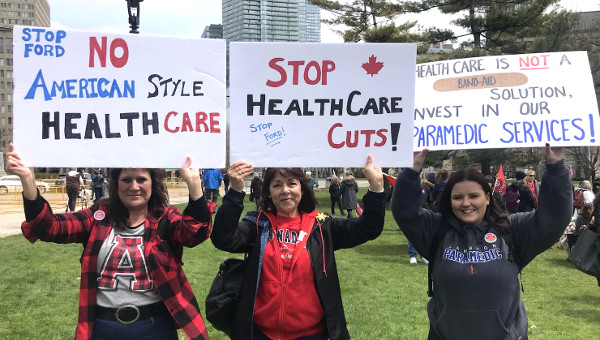 This large increase is likely due to the February 2019 interest arbitration award for doctors, an award that was praised as “fair” by Christine Elliott, the Minister of Health and Long-Term Care. The Financial Accountability Office estimates the award will increase OHIP payments to doctors over a billion by 2019/20 and by $1.496-billion by 2020/21. That’s roughly about a 12.5% increase in OHIP funding for doctors over four years.

This news comes as the government is pushing – possibly with an attack on free collective bargaining – to reduce the settlements for workers in the broader provincial public sector.

The government puts total compensation for all the hundreds of thousands of employees in the broader provincial public sector at $60-billion. So $1.496-billion would equal a 2.5 per cent increase in total compensation for the hundreds of thousands of broader provincial public sector employees in the province.

Hospital operating funding is budgeted to increase $384-million this fiscal year – about a 2 per cent increase. This is about the same as the increases during the years of Liberal austerity and falls about 3 per cent below cost pressures.

Homecare funding is budgeted to increase $267-million, about the same as recent Liberal increases. This is a significant increase – the PCs are continuing the existing Liberal policy of increasing the quantity of homecare services. The dollar amount of the increase is about the same as under the previous Liberal government, however, so there is no reason to expect any miracle cure of hallway healthcare.

There is no specific word in the Budget (nor in the Estimates) about long-term care (LTC) funding.

Healthcare funding as a whole, however, will see a $1.352-billion increase, or 2.175% compared with last year’s interim estimate in the Budget.

Funding for programs outside health: Total funding for all government programs is budgeted to increase $125-million compared to last year’s interim estimated spend set out in the Budget.

This is the totality of the much ballyhooed “increase” in program spending for this “moderate Budget.” That is an increase of less than 1/10th of one percent, far, far short of the cost pressures arising from inflation, population growth, and aging that must be offset just to maintain existing services. This will inevitably lead to cuts in service, but the cuts will have to be both qualitative and quantitative, given the extent of the funding squeeze.

While healthcare funding increased $1.35-billion, all other programs were cut $1.23-billion compared to the interim estimate of expenditures for 2018/19 in the Budget.

There were a few programs that got increases other than health – notably Education (partly to delay the cuts in the number of teachers) and the Solicitor General (policing, jails). The contingency fund is also higher. Those areas aside, the cut is $2.653-billion for all other programs. That’s a whopping 5.2% cut in one year.

Armageddon for Other Programs

Cuts are coming to healthcare, but harsh austerity will rule in many other programs.

Healthcare campaigns by community and labour can take some of the credit for fighting off the worst cuts for hospitals and healthcare. It was not like this the last time the PCs were in power. In the nineties the PCs immediately began to chop hundreds of millions off of hospital budgets – only to reverse themselves some years later.

Media right-wingers (and some other journalists played for rubes) repeated the government’s spin that this was a moderate Budget. But the cuts in service that have been revealed since the Budget are showing that to be false. With this level of real funding cutbacks, expect more cuts to be revealed.

2018/19 In-Year Budget Changes: Over 2018/19 in-year funding changes increased healthcare funding by $900-million from the 2018 Budget, while in-year changes for all other programs resulted in a decrease of $900-million. Some of the increase for healthcare came from movement campaigns (winning more hospital beds and funding).

The Future: Healthcare funding increases are budgeted to slow down in the years ahead – averaging 1.4% over the three years after 2019/20. So things will get worse in healthcare – unless we campaign successfully to reverse that cut.

The government also wants to create an “integrated supply chain model across the health sector, resulting in reduced government expenditures.” The recently passed Bill 74 gives the minister direct powers to require the entire sector, entire healthcare regions, or entire healthcare sub-sectors to use the services of this or that corporation. Likely, this will mean larger, foreign-based transnational corporations will squeeze out smaller businesses that currently have niches supplying specific hospitals or other specific providers.

We asked the government to clarify that such changes would not result in the privatization of support services. No such clarification has been forthcoming.

In contrast to the generally coy approach to healthcare privatization of this government, the Budget explicitly calls for moving hospital patients from hospitals to retirement homes – a fraught policy that has been tried (more or less secretly) since at least 2009. This flies in the face of the denials from the ministry that privatization is not in the cards, but the for-profit retirement home corporations have hit on a whole new way to increase their profits.

Another key area of privatization will be the movement of diagnostic, surgical, and clinical services from hospitals to for-profit providers through the Integrated Care Delivery Systems currently being set up. The government’s hope, they tell us, is to transfer the work, but not the worker (thereby relieving themselves of the sticky problem of mature collective agreements and decent working conditions). The lightly disguised code for this is moving work from “high cost to high value” providers.

On the municipal side, the Budget said they would “streamline” the province’s 22 ambulance dispatch centres by integrating them with the 59 EMS operations in the province.

That sounded odd: streamline 22 down to 59? Now we have learnt from the Association of Municipalities of Ontario (after the Budget) that the government is considering streamlining EMS services down from 59 to 10. So this line makes a bit more sense. But, if they do carry out restructuring along these lines, it also means smaller towns may lose their dispatch jobs, including the CUPE organized hospital-based dispatch services in Kenora (Lake of the Woods Hospital) and North Bay (North Bay Regional Health Centre).

Since the Budget we have also learned the government will freeze it’s payments for land ambulance services.

Cost increases for ambulance services are significant given a growing population, aging, and offload delays caused by the failure of government to increase hospital capacity. Hospital austerity results in a back up of patients waiting to get in to the hospital through the Emergency Rooms. This in turn forces paramedics to wait in the ERs to offload their patients. Currently about 20 per cent of paramedic time in the larger centres is spent in offload delays in the ERs rather than on the road responding to 911 calls. This drives up costs for municipal ambulance services.

The result of these factors is that costs for land ambulance are going up – if 911 service is to be minimally maintained. Until now that has been jointly borne by municipal governments and the provincial government. The latter is now unilaterally turning it’s back on a long-standing funding arrangement with municipalities (despite creating the back ups in the ERs via underfunding hospitals).

The Ford government have implemented the EMS cut retroactively for this fiscal year, long after municipal governments have passed their budgets. It’s not clear that all municipalities will be able to make up this cut, especially after the provincial cuts for municipal Public Health (discussed below). Municipal governments in rural, northern, and economically depressed areas will especially struggle. However, if services are cut, consequences could be very serious for patients.

Has the government done a thorough risk assessment of what may be the consequences if services are cut? If not, this is a truly reckless policy.

The municipalities, and property tax payers, are taking a very hard hit from this government. It is very hard to understand why property tax (the form of taxation that municipalities can impose) should pay for more of such vital health service as EMS or Public Health. Those services are a long way from road repairs, garbage, fire, sewers, and waste water – services that are closely connected to property. Property tax increases adversely impact older residents who bought houses years ago when properly was cheaper but now, in retirement, have fixed and/or low incomes.

Many Ford voters will be among those adversely affected by the changes to tax structure wrought by the Ford government (i.e. putting more services on the property tax dime).

The Budget indicates that they are also planning to divert ambulance 911 patients from hospitals to other providers – this will almost certainly include for-profit providers and raises concerns about patient safety and liability when errors are made. Again, has a thorough risk assessment been completed?

Also on the municipal side, the Budget announced plans to cut public health units from 35 to 10 and cut provincial share of the funding over several years. Ultimately, this will mean a loss of $200-million annually for local municipalities. That is about a 27 per cent cut in provincial funding over several years. This, despite this year’s overall 2.175 per cent funding increase for health programs.

Both Public Health and ambulance restructuring have become major public issues since they were revealed, with municipalities beginning to express their anger. They now face the prospect of having to pay more for Public Health and ambulance services out of their property taxes while the province rips control over those services away from them. Labour and community co-ordination with the municipalities over these issues could help.

According to the Budget, the government plans to focus drug benefits on those who need them most. The exact meaning of this remains unclear – but it will be a further move from universal coverage.

Related to the Budget, the government is looking to cut $460-million in OHIP services and is working with the doctors on these cuts. This, presumably, includes removing payments for out-of-country inpatient stays (currently capped at $200 a day for inpatient and $400 a day for ICU). That cut, the government claims will save $9-million. It will likely drive up private health insurance costs for snowbirds and others travelling out of country – another hit for many in the Ford Nation base to swallow.

Since this article was first drafted as a briefing note more cuts have been revealed. More will likely come given the scale of the cuts. •

This article first published on the OCHU Leftwords website.