The decision of the new Tory Government in Ontario to terminate the basic income (BI) pilot project that their Liberal predecessors had set in motion, confirms that the right is as divided as the left on this issue of social policy. The Doug Ford Tories form part of an international right wing opposition to BI that does not share the view of the Silicon Valley billionaire set, the World Bank and a range of others within the neoliberal order that this form of income support could serve the needs of capitalist exploitation. 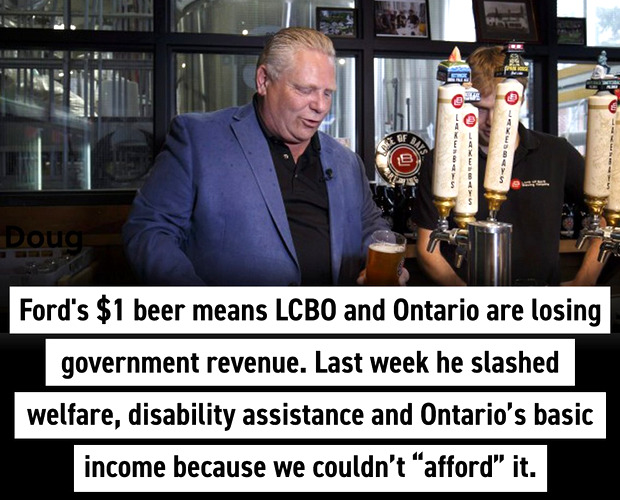 The right wing skeptics are bothered by the element of reduced conditionality that basic income contains and Ford and his crew, as meat and potatoes reactionaries, are especially hostile to the notion of giving poor people income without keeping the boot firmly on their necks. It’s instructive to compare the reasoning of Ford’s Minister of Community and Social Services, Lisa MacLeod, with that of the UK Tory secretary for work and pensions, Esther McVey. Separated by an ocean but united in a commitment to war on the poor, the two Tories both view basic income as a ‘handout’ that prevents the corrective treatment they believe must be administered in order to create an industrious poor.

The Ford Government’s decision to kill the BI pilot gives us little reason to celebrate because they are removing it only so as to clear the way for a brutal attack. I shall return to this point shortly but, first, for reasons that are very different to those of Poor Law fans, the idea of basic income should still be rejected by those on the left. A horribly fascinating dissenting voice was raised against the Ontario Tory rejection of basic income. Federal Tory Finance Critic, Pierre Poilievre, while dismissing the Liberal pilot as a model of hopeless generosity toward the poor, vigorously defends basic income as part of the arsenal of the right. Citing the writings of the late unlamented Milton Friedman, Poilievre advocates “a tiny survival stipend for all low-income people” paid for by “eliminating all other programs, including housing, drug plans, child care and the bureaucrats who administer it all.”

Of course, Poilievre wants to stick it to the Liberals but, in reality, their pilot, while it may have gone a little beyond the thin gruel he favours, did actually adhere to a model that served the neoliberal agenda. I have already taken up the nature of the pilot in more detail in an earlier Bullet but, fundamentally, it had little to do with the ‘universal basic income’ that progressive advocates talk of. As a small scale showpiece program, it paid an income that was significantly more than social assistance but that was still low enough to drive people into low waged work. Drawing its test subjects, for the most part, from among those who were employed, it functioned as an experiment in providing a subsidy to the most exploitative employers. Moreover, the loss of supports and benefits that those on social assistance who went on the program faced, took us exactly in the direction of Friedman’s goal of using BI to replace, rather than augment, other systems of social provision.

The end of the Ontario pilot is no reason for us to reconsider opposition to basic income as a neoliberal trap. However, this in no way means that the Ford Tories have moved in any positive direction. There is one hugely unjust immediate impact that flows from their decision and a truly dreadful impending result that we must consider.

However necessary it is to stress that basic income would be implemented across a major political jurisdiction in such a way as to further neoliberal objectives, it is also absolutely obligatory to express outrage at the way in which the 4,000 people receiving income through the Ontario pilot are having the rug pulled out from under them. Though still a sub-poverty income, the showpiece pilot meant a significant improvement for those who had been on Ontario Works (OW) or the Ontario Disability Support Program (ODSP). People had been promised this income would be maintained for three years and had planned their lives accordingly. The demand that the agreement should be lived up to by the new Government is an entirely just one that should be fully supported regardless of any disagreements on the broader implications of basic income.

The greatest threat that flows from the Tory decision to kill the pilot, however, lies in their glaringly obvious motive for doing so. Campaigning for office, they appeared ready to continue with the test run but, once they formed the Government, they realised that an experiment that involved easing up on the level of bureaucratic intrusion into the lives of people on income support could not be tolerated. This is because they intend to double down on such a Poor Law approach in the near future.

Tory Minister MacLeod held a press conference on July 31 in which she announced the end of the pilot and the killing of a series of positive measures that had been set to go into effect. She also revealed that the 3% increase in social assistance rates that had been due to take effect would be cut in half. The viciousness of this is apparent when you consider that, ever since the Mike Harris Tories cut the rates by 21.6% in 1995, there has never been a year when an increase has been provided above the rate of inflation. This would have been the first time in more than two decades that those on social assistance did not sink deeper into poverty. It was a brutal but well calculated move on the part of Doug Ford’s ‘Government for the People’. However, this is only a mean spirited down payment and the big attacks are still being prepared.

At her press conference, MacLeod made clear that the Tories would be conducting a 100 day review of the social assistance system that will produce a model of right wing ‘welfare reform’ that will take the war on the poor to a new level. She revealed that the Tories will intensify the policing of people on social assistance and launch a crackdown on so called ‘welfare fraud’. This will serve as a ‘ritual of degradation’ that makes the receipt of public assistance even more humiliating than it is at present. MacLeod focused her comments, however, on her Government’s goal of a system of sub-poverty income support that has been perfected as a mechanism for driving people into the lowest paying and most exploitative jobs on offer. This work gets underway even as the Tories target the minimum wage and basic workers’ rights. Obviously, not afraid to resort to right wing clichés, the Minister told those gathered for her announcement that “the best social program is a job.” She would not respond to media questions on whether a workfare forced labour approach would be part of her ‘reform’ package.

The objective here is clear. The degrading of social assistance in Ontario has contributed enormously to the proliferation of low wage precarious work. Benefits have been reduced and access to the system so restricted that a climate of sheer desperation has taken hold. The Ford Tories are not satisfied that this has gone far enough. They want a system that is even more inadequate, uncertain and punitive. The scramble for the worst jobs is to be made even more desperate and the Minister was careful to stress that disabled people would not be exempt from it. This is a war on the poor but, by extension, it is an attack on all workers, aimed at reducing bargaining power, depressing wages and weakening the capacity of trade unions to fight back.

Basic income has been taken off the table for now in Ontario but only to clear the way for the Doug Ford Poor Laws. As the fight against this Government grows, the Tory attack on the right to an income people can survive on must be seen as one of the main elements of their agenda and challenged accordingly. •