Universal Basic Income Is Not the Answer

A Leftist Case for Social Investment

Is a guaranteed liveable universal basic income (UBI) the right solution for current economic woes? Or does it make more sense to re-invest back into public institutions and social services?

In August, Winnipeg Centre MP Leah Gazan proposed extending the CERB (Canada Emergency Response Benefit) into a permanent UBI. Motion-46 proposes introducing an unconditional, guaranteed liveable income to all Canadians above the age of 18, paid on a regular basis, supplementing benefits already received from current and future government public services. The motion has been received positively by many, including students. 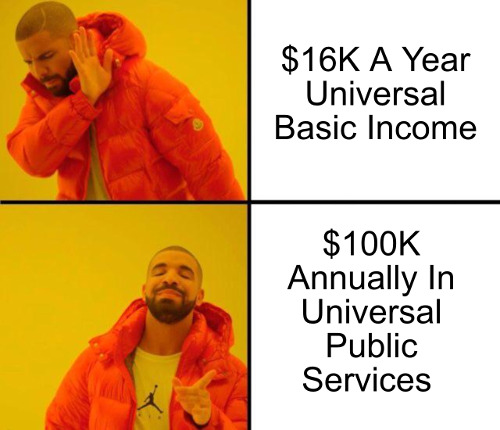 A recent article in The Uniter states, “For post-secondary students, many of whom have had to deal with precarious work conditions, coupled with having to adapt to abrupt changes in how classes are delivered, a basic income could prove to be beneficial.” But is UBI really the solution?

In the context of increasing government cuts, can we even be sure that UBI will keep us afloat against rising inflation? How can we be sure that it won’t be used as an excuse for more cuts to education and healthcare? The Government of Manitoba even floated a 30 per cent cut to public universities during the COVID-19 pandemic.

Considered in the context of government cuts to spending, UBI raises several red flags. It may in fact contribute to exacerbating some of the larger economic and social problems we currently face, such as rising costs of living and greater austerity. Social investment might be a better solution than a UBI.

UBI is an idea that I first took seriously after reading Nick Srnicek and Alex Williams’ 2015 book, Inventing the Future: Postcapitalism and a World Without Work. The authors defend the implementation of a fully automated society, alongside a UBI to alleviate potential drop crises in market demands as automation comes to replace human labour.

Their proposal seems somewhat unrealistic and problematic, as they imagine a technological solution to economic problems. It also disregards decades of divestment from public institutions and social services. However, the context of the COVID-19 pandemic has given many people a reason to seriously consider the implementation of a UBI.

The CERB helped to relieve stresses from incomes lost during the pandemic and provided an added incentive for people to comply with needed quarantines. But we should be wary about turning it into a Band-Aid solution for our larger economic problems.

Gazan and other MPs supporting the idea of the UBI are to be commended. They have clearly shown that their interests are with the people, supporting our needs for a healthy and sustainable life.

We live in precarious times, brought about not only by the COVID-19 pandemic, but also by times of economic, environmental and social uncertainty. However, the recent discussions about UBI have reminded me about many of the concerns I had previously when reading Srnicek and Williams’ proposal for full automation.

Spending cuts dominate government policy in light of the reigning neoliberal orthodoxy that prioritizes markets over people. The market fundamentalism of neoliberalism, a political and economic approach that favours deregulation and privatization at the expense of public services, means that government policies have turned the market into the primary space for accessing needs through personal spending and consumption. Attached to neoliberal governance is a policy of balancing government budgets and austerity, which sounds good on paper, but rarely helps us out in practice.

Neoliberals often use the metaphor of the individual household managing incomes and budgets to support their positions, claiming that we shouldn’t spend above revenues. But governments aren’t individual households. They are responsible for ensuring equitable access to needs and are accountable to society as a whole.

Austerity has resulted in divestment from education, healthcare, city budgets and costs allocated to daily needs like transportation. At the same time, the international deregulation of finance has been one factor in rising costs of housing. All of these costs, which in previous generations were covered collectively through progressive taxation and investments into public institutions and social services, have now been offloaded onto individuals and individual households, and is a major factor for rising costs of living.

Taking all of this into consideration, UBI, while appearing progressive, will only help to merely prop up markets and service debts we shouldn’t have in the first place. We are now paying out of pocket for many of our resources and needs that should be provided by our governments.

Although Motion-46 registers the need to maintain the existence of current public services, it makes no mention of costs and budgets.

We can impose stricter regulations on finance, and we can roll back tax laws that unfairly favour the wealthy. We can also join the fight to raise the minimum wage to (at least) $15 an hour, struggles for which are noteworthy, since wages haven’t even kept up with inflation. To my knowledge, there are no proposals to keep UBI amounts pegged to inflation.

We need to be more creative and imagine more progressive ways to subsidize and lower real costs of living, putting the onus back on governments and the wealthy. We need to alleviate the stresses of individual households having to manage previously subsidized costs, while at the same time going to school, taking care of our families, making health decisions and working multiple jobs to make ends meet.

Our situation here in Canada is better compared to our neighbours to the south. But why don’t we compare ourselves to the best-possible, rather than the worst-possible scenario?

Without lowering real costs of living, a UBI risks becoming nothing more than a mere prop to markets and a way to service individual and household debts.

There is an earnestness in the supporters of Motion-46. However, before we make hasty decisions about this proposal, we need to have serious conversations about the bigger picture and the need to increase social spending.

The student movement must be a major player in this fight and demand an end to cuts, as well as reinvestments in education and all other valuable public and social services, which subsidize real costs of living. This is an endeavour that builds on the ethics of social justice and a demand for the democratic governance of our economy. UBI only makes sense when we don’t have to worry about cuts to social spending. •

Matthew Flisfeder is an associate professor of Rhetoric and Communications at The University of Winnipeg. He is the author of Algorithmic Desire: Toward a New Structuralist Theory of Social Media (Northwestern University Press, Forthcoming 2021).