Toyota Autoworkers Take on the Liberals

About a hundred autoworkers, led by workers from Toyota, and their supporters rallied in front of Queen’s Park in Toronto on April 22. They were protesting the Liberal government’s decision to allow an “exception” for the auto industry for personal emergency leave (PEL) days. The exemption was brought into effect in January 2017. When the government ushered in a series of reforms to labour law in the province through Bill 148, it kept the PEL day exemption for the auto industry. 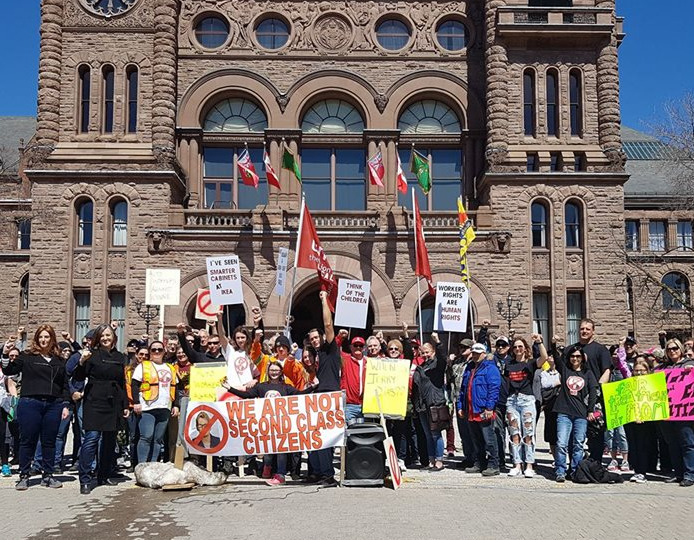 Under Bill 148 workers in the province are entitled to 10 days of personal emergency leave. This leave can be used for sickness, bereavement, family emergency. In the event of an illness no doctor’s note is required. The first of these two days used are paid. Under the exemption autoworkers are entitled to seven days a year of personal emergency leave and three days for bereavement. None of these days will be paid. Scrapping both flexibility of how workers use PEL days and the removing the two paid PEL days is a boon for the auto industry.

The government agreed to this exception bowing to pressure from Toyota. Toyota claimed the PEL days provided for in Bill 148 would keep its operations from being competitive. The Toyota workers behind the rally decried this. They declared it makes autoworkers second class citizens.

Unifor responded to the workers’ protests which began late last year by starting a petition calling on the government to give autoworkers the same entitlement to emergency leave days as other workers. However, Unifor did not support the April 22 rally. Top Unifor leaders were conspicuous in their absence. This made it a protest staged by rank and file autoworkers from both non-union and unionized plants supported by some retired autoworkers who had held or still hold leadership positions in their local unions. The absence of top Unifor leaders was due to a government commitment to study and review the issue in response to the petition and protests.

The autoworkers at the rally are totally unwilling to accept this outcome. They insist there is nothing to study. They want the same rights as all other workers. The autoworkers were supported in this position by several New Democratic Party members present who were either sitting MPPs or candidates in Ontario’s June 7 election. The New Democrats present pledged that if the NDP forms the next Ontario government the law will be changed to end this injustice.

Significantly, if the Liberals lose power on June 7 their study of the issue will die with their government. Likewise, if the Tories (who lead in the polls) win power, autoworkers will be stuck with just seven unpaid emergency leave days a year while other workers get ten with two paid. It is no wonder then that the protesters insisted on seeing the legislation change now while the Liberals retain a majority government. It is also no wonder they are angry at not having Unifor continue to support their stand and Unifor be content with waiting for the outcome of the study.

Insofar as the April 22 protest was organized by autoworkers who work in a non-union workplace and supported by other autoworkers who backed their action despite the absence of continued Unifor support, the protest was unprecedented and historic. Non-union autoworkers in Canada have never organized a protest to back a political demand before. Consequently, those who chose to stay away and not support the protest passed up on an opportunity to make their presence felt at what turned out to be a truly unique event in Canadian labour history.

These developments may become even more significant. The workers who built the protest remain determined to continue to fight to get the same entitlement to personal emergency leave days as other Ontario workers. Should they go on to link this fight to the $15 and Fairness campaign which is continuing to fight for more gains for Ontario workers beyond those won in Bill 148, the historic significance of what they did on April 22 can become much more profound. •

This article first published on the Rank and File.ca website.