No Fare Is Fair: A Campaign for Free Public Transit in Toronto

Why Do We Need Free Transit?

Public transit should be a right for everyone in Toronto. Using subways, buses, and streetcars shouldn’t require paying fares, or user fees, that penalize riders with lower incomes.

Like public education, libraries, clean water, and healthcare, public transit should be funded by government revenues. Regardless of income, which part of the city you live or work in, or if you have mobility challenges, transit should be easily accessible. 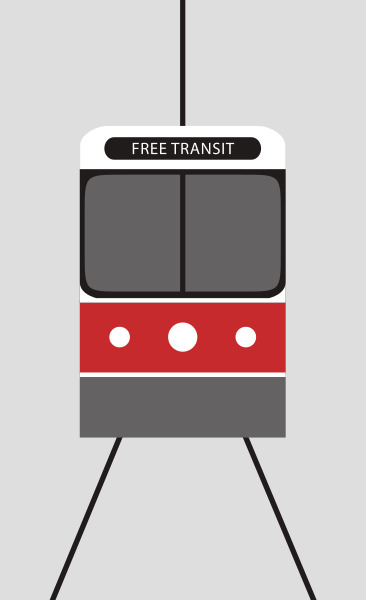 Imagine how empowering free transit would be: No more barriers between you and your destinations. No more fare gates. No more harassment from “fare police.”

Toronto transit fares have risen faster than inflation. Even with the low-income fare program, many people find public transit simply costs too much. Free public transit would make mobility accessible to all.

What Are the Benefits?

Free transit would be a critical step in addressing climate change. It would help reduce urban sprawl, discouraging developers from building on farmlands and outer suburban areas.

Fare-free transit would reduce the costs of road maintenance as well as the environmental pollution and health issues caused by our current dependence on private cars. Everyone would benefit, even motorists, who would have less-crowded roads. Governments currently provide large subsidies for roads and highways for cars and trucks. Our tax dollars should benefit the common good.

What Would it Cost?

Or $1.7-billion in operating revenues, currently covered by the farebox. Fare-free public transit would also require investment to expand the system and accommodate more riders.

How Would We Pay For It?

A more progressive tax system, based on people’s ability to pay, could finance fare-free transit. The provincial and federal governments could fund transit in Canada’s largest city, just as they do for healthcare and other important services.

In other words, free transit is easily affordable if the political will is there!

The largest city with fully fare-free public transit is Tallinn, Estonia, with a population of over 400,000. Many other cities and towns around the world have either fully or partially fare-free transit systems. These include fare reductions or fare-free access in the city centre, for children, students, the elderly, people with disabilities, or on ‘spare the air days’ when smog levels are high.

Even Toronto has experience with free public transit. As of March 2015, children aged twelve and under can ride the TTC without paying a fare. Remarkably, this has led to a doubling of children using public transit. In 2016, the first full year of the fare-free program for children, the number of transit users under the age of thirteen ballooned to 22 million. This is one of the biggest success stories Toronto transit has seen. Why not expand the fare-free transit program to include everyone in Toronto, starting with our most vulnerable residents?

Free public transit would require an expansion of the existing transit network to serve the increased demand, which would in turn produce many jobs and improvements to infrastructure.

Our dependence on fossil-fueled cars would give way to sustainable transit. It would significantly transform the industrial base of the country in the direction of a green future. Building green alternatives such as subways, buses, and light rail would provide good jobs for many laid-off industrial workers and future generations of workers seeking employment.

Best of all, a new and dramatically-improved public transit system would benefit all Torontonians.

Free transit would require more public capacity to finance and operate the system, with democratic input into the work that workers perform.

Just as Toronto’s original subway, buses, and streetcars were financed by public bonds, free and better transit can be created without paying profits to private interests. •