All Hands on Deck: The West Virginia Teachers’ Strike

Dignity and respect are the root cause of every serious labor struggle. This was certainly the case in West Virginia’s unprecedented nine-day statewide education strike. When the workers won this past Tuesday, singing and dancing erupted among the thousands who packed the state capitol. Their final chant before leaving the building was, “Who made history? We made history!” 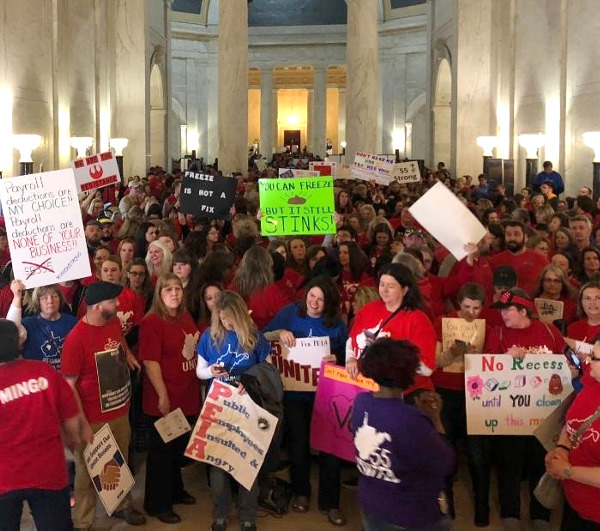 The strike produced a string of significant victories, not all of which are immediately tangible. Perhaps most significantly, it restored the dignity of 34,000 workers, rebuilding the pride of West Virginia’s working class and reinforcing one hell of a union that will carry the struggle forward.

This point seemed lost on much of the media that covered the strike. No matter how many times workers talked about defending public education and expanding quality schools, the press focused on just two issues: health insurance and a raise. But Wendy Peters, the president of the Raleigh affiliate of the West Virginia Education Association, says, “Wages and health benefits were almost a distraction. They are important, but there were five major stances we took, and we won all five.”

These included defeating an expansion of charter schools, killing a proposal to eliminate seniority, and scuttling a paycheck-protection bill (aimed at weakening unions by taking away their right to deduct union dues through payroll collection), as well as a mechanism to fix the health-insurance crisis and a raise big enough to matter.

According to Peters, “Each one of the bills that would undermine the education of our kids by attacking teachers were being voted on in committees and making their way to passage. We were getting pounded on here by a majority of Republicans in both houses.”

Peters, who has a master’s degree and years of experience, adds, “Their bill on seniority would have let them replace me with someone unqualified to give a good education to our kids. I have a 5-year-old son and I am fighting for him to get a quality education.”

Respect and dignity were also front and center in the health-insurance issue. In the 2017 legislative session, the state legislature passed SB 221, which shrank the board that governed the Public Employees Insurance Agency from 10 to eight members and removed a requirement that organized labor have a seat on the board. Later that year, the board proposed the implementation of Go365, an app that requires workers to wear devices like FitBit that submit tracking data. Workers that refused would face increased healthcare costs. Peters notes, “It was a complete, total invasion of our privacy.”

In addition, health insurance rates would have been based on a new calculation that based premiums on total family income, not an individual worker’s income. “By adding my husband, I was facing a $200-a-month increase,” says Peters, “so when Governor Jim Justice offered a 1 per cent pay raise in January, people had had enough.” The indignities kept rolling in, including the governor’s calling teachers “dumb bunnies” at a town hall in Logan County in early February.

All Hands on Deck – for the Strike

From the very first day of the strike, the unions shut down every public school in the state, with 34,000 workers out. As the strike rolled on, a steady stream of thousands protested at the state capitol – many wearing bunny ears – while others staffed picket lines around their schools. At the same time, the parents of over 270,000 kids simultaneously supported the strikers, while scrambling to find places for their kids to stay. On Tuesday, February 27, the governor sat down and hammered out an agreement.

“We won on all five stances – everything – which is pretty incredible” says Peters.

The settlement includes a commitment by the governor to veto all the anti-union legislation and a 5 per cent teacher-pay raise. The unions also won the creation of a task force on healthcare that guarantees organized-labor seats at the table. Each of the three striking unions – AFT-West Virginia, WV Education Association, and WV School Service Personnel Association – will appoint a member, essentially restoring workers’ right to govern their own healthcare. The healthcare task force must have its first meeting by March 13 and issue its final report before December 2018. According to Jay O’Neal, a key rank-and-file teacher leader in the strike, “Most important, we made it so thousands of eyes will be watching everything the task force does.”

Defeating a raft of anti-union legislation in a right-to-work state as oral arguments are given in the Janus case at the Supreme Court would alone have been huge wins. But to top it off with a structured process to resolve the healthcare crisis, a freeze on the proposed financial increases in the plan, a reversal on the privacy-invading app and a pay raise huge by state standards – that’s breathtaking. The win was so big that, almost immediately, the right wing set out to upend the settlement and make the outcome seem more like the Wisconsin uprising: total defeat.

Within hours of the settlement announcement, State Senate President Mitch Carmichael announced that the Senate didn’t plan to approve it. West Virginia station WSAZ reported that “Carmichael speculated that as many as 22 Republicans in the 34-member Senate will oppose Governor Justice’s plan.” Wednesday was to be a cooling-off period, with everyone returning to classrooms the next day. But instead, rolling strike votes began spreading across the state, in all 55 counties, with workers electing to defy their leaders and continue the strike until the deal got voted on and signed into law by the governor.

Gary Price, the superintendent of Marion County Schools, recalls the moment when he heard that “our little elementary schools – you know how elementary-school teachers all are very nurturing, all very kind – that they voted 100 per cent not to return.” It was then that he realized that the whole state was in trouble. “The crisis really escalated because we went from having one work stoppage to having 55 work stoppages in 55 counties…. It was something that was out of control at that point,” said Price.

By Friday, Price had gathered all superintendents across the state for a meeting in the capitol with Carmichael. Their message to him was, “This strike will not end until the package is voted on and signed by the governor.” Price says he believes that it was “critical when we [the superintendents] put our thumb on the scale.” But he is clear that their message was strong precisely because the education unions had created a serious crisis.

Despite the unions’ wins on all five of their demands, much of the media failed to grasp the magnitude of this victory. Headlines suggest the workers won by sacrificing the very people they went on strike for: the West Virginia working class.

According to Emily Comers, a 27-year-old teacher in her third year of teaching Spanish, the raises will not be paid with cuts to Medicaid. She says the plans on the part of the teachers and the service personnel are to win corporate-tax increases to pay for the long-term fix in the healthcare plan. Comers notes, “Our message from day one has been for a reversal of corporate tax breaks. We want to raise the gas-severance tax. People were chanting this in the capital for two weeks. It has been what we wanted from the beginning, and it’s what we plan to win.”

The teachers understood that to win, to not go down in the record books as another huge defeat, they had to stay on strike and escalate the crisis. They could not have achieved the victory without having the community firmly on their side. Educators, like healthcare workers, have an incredibly powerful, organic relationship with their communities – relationships so strong they are durable against sophisticated right-wing attacks. The solidarity built in West Virginia was built in a strike that united the state against the power structure. The sooner the progressive movement understands that, to save our democracy, people must rebuild robust unions – that means a strong embrace of teachers and education and public-service workers – the sooner we all start winning. •

This article first published by The Nation.