In the debate around the pros and cons of basic income, the implications for immigrants are seldom discussed. This omission, whether intentional or a product of indifference, is particularly glaring in progressive pro-Basic Income (BI) literature where the term “citizen’s income” is often used synonymously. Taken together, a troubling picture emerges of what is imagined for basic income and who is to be included within it. While basic income is often promoted in the name of social justice, we will demonstrate that this vision is flawed and excludes migrants – which we argue is both profoundly unjust and works to reinforce the white supremacy and class hierarchies that are foundational to the Canadian state. 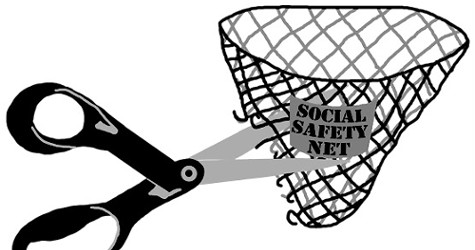 Globally, the predominant driver of migration continues to be poverty and war. Growing income inequality fuelled by neoliberal capitalism and ever-expanding wars are driving record numbers of people away from their homes. Historical forces have shaped the world such that a sizable amount of this migration is heading to the global north. The same forces have also created immigration systems to control migration, and by extension, migrants themselves. This control has taken the form of forcing migrants to work in precarious conditions for low pay and with few legal protections. A key mechanism of exerting this control has been the introduction of a tiered system of rights and privileges.

In Canada, this takes of form of the classification of migrants based on their mode of arrival. There are permanent residents, temporary foreign workers, refugees, and students. There are also those who are denied any legal status, and forced to become undocumented. Each category has a different set of rights and legal protections. Permanent residents are closest to citizens in their grant of rights and legal protections whereas undocumented residents are afforded virtually none of either. While there exists some mobility between the categories, the process is expensive and convoluted, often taking years, and in some cases, there is no mobility at all. Trends in immigration policy demonstrate a shift toward keeping an increasing percentage of migrants from obtaining permanent residency, and by extension, citizenship. For example, over the past decade and a half, when Canada increased its intake of immigrants, the greatest expansion – a three-fold increase – was in the category of temporary foreign workers. The clear motivation for these policies, despite often being couched in xenophobic rhetoric, is the need to create a flexible business-friendly labour market. Given this context, and Canada’s reliance on immigrant labour for its economic and population growth, it is imperative that we assess what the introduction of basic income means for migrants.

Basic income is generally imagined by its progressive proponents as a universal benefit – meaning that everyone would get it regardless of their circumstances. In the means-tested version, it is proposed that anyone who falls below a certain income level would qualify. Comparisons to existing universal programs such as healthcare, Old Age Security (OAS), Guaranteed Income Supplement (GIS), and the Canada Child Benefit (CCB) lead proponents to argue that basic income would be a replication of such programs. It’s important to examine the presumed universality of these programs for two reasons. Firstly, BI proponents typically assume the same number of people who access existing benefits should be eligible to access basic income. Secondly, existing universal benefits aren’t truly universal: not all residents of Canada have the same level of access to them. Migrants often have restricted access to, or are excluded from ‘universal’ programs. For instance, taxes paid by temporary foreign workers support OAS, GIS and CCB but they can seldom access them. The same applies to their contributions to Canada Pension Plan and Employment Insurance. When it comes to healthcare, temporary foreign workers are only eligible if they continue to have a job. Many permanent residents can’t access OAS and GIS until they have lived in Canada for at least 10 years and in some cases double that time.[1] Furthermore, they must continue to meet residency requirements, not applicable to citizens, in order to maintain their immigration status, and with it, their grant of rights, benefits, and protections. Undocumented residents, who make up as much as 1.4% of Canada’s population,[2] are not eligible for any benefits or health coverage.

The so-called ‘universal’ access is generally implemented along citizenship lines. That’s why, writing about the creation of Canadian welfare state, Sunera Thobani says that “access could certainly have been organized along different principles [other than citizenship], and with different eligibility criteria, had there been a commitment to ensure that this access became truly universal.”[3] In other words, citizenship criteria for social programs works to disproportionately exclude racialized immigrants. Uncritically continuing to apply universal benefits in this way maintains this white supremacist pattern.

“Taken together, the Canada Child Benefit, Old Age Security, and the Guaranteed Income Supplement essentially offer a Basic Income Guarantee to around one-third of the Canadian population. What is left now is to close the gap so that every Canadian can be protected from the health effects of poverty.”[4]

It seems clear that the presumed pragmatism of this version of BI relies heavily on continuing existing patterns of exclusion in society. It is incomprehensible to us then how social justice is so frequently used as the justification for basic income when so many people, the vast majority of whom would be poor people of colour, would either fare no better, or more likely, be worse-off. In their struggle to “achieve a post-work society,”[5] proponents of basic income either fail to consider or accept the fact that some people – migrants – will still have to work, often in the underpaid and poor conditions they are forced to work in now.

To illustrate the points above, let us consider a few instances where basic income proponents actually talk about migrants. Owen Poindexter, host of The Basic Income Podcast assured listeners anxious about a migrant influx following the implementation of basic income that BI could be designed such that immigrants couldn’t get it for a very long time and their children, even if born in the country, couldn’t get it until they were 18 years old.[6]
Similarly, James Davis, writing a guest post for the Basic Income Earth Network (the only post we could find on that website that dealt with immigration) also proposes a callous and unjust BI approach when it comes to migrants in the United States: copying the existing social assistance rules. This would be useful, he argues, “to alleviate concerns that noncitizens would take advantage of the UBI: as it stands now, non-citizens receive substantially less welfare transfers than their citizen counterparts.”[7] Because of anti-immigrant sentiments and white supremacy, both Davis and Poindexter argue that BI can be designed to ensure less or no eligibility to BI for migrants.

At best, migrants are an afterthought. Krauter and Vance describe basic income as a program in which “the government would ensure, either by a direct payment or a top-up in the tax system, that all citizens (in some plans, certainly those proposed on the left, this would be extended to include refugees and permanent residents) not fall below a certain level of income per year.”[8]
It’s evident that the primary recipients of a basic income are envisioned as citizens, with only a perfunctory acknowledgement calling for the consideration of permanent residents and refugees.

One important exception to the dearth of acknowledgement of the impact on, let alone existence of, migrants, can be found in Guy Standing’s work. He argues that basic income is necessary for migrants who are both the victims and “the light infantry of global capitalism.”[9]
He makes the case that there has been an upturn in anti-migrant backlash because of the increasingly flexible and precarious labour market which replaces non-migrant labour with less expensive and more vulnerable migrant labour.

Standing argues that existing needs based social assistance programs have “probably done more than anything to fan resentment of migrants and ethnic minorities.” He maintains:

“A social insurance-type system based on entitlements gained through labour based contributions rewards those who have been in the system for a long time. If benefits and access to social services are determined by proof of financial need, then those who have contributed will lose out to those, such as migrants, who are demonstrably worse off. For the withering ‘working class’, this is perceived as unfair.”[10]

We certainly agree that the neoliberalization of the economy has been bad for the working class[11]
and that this “process is systemic, not accidental.” But Standing provides an ahistorical explanation of the backlash against migrants. He fails to position it within the long history migrant scapegoating and racist immigration policies. There are many problems with needs based social assistance, including that they have overly restrictive eligibility criteria and low entitlements. However, Standing’s argument that social assistance whips up anti-migrant fervor is both convenient and flawed.

Standing’s solution to the racism and anti-migrant hatred that people face is, unsurprisingly, basic income. However, he suggests no mechanism for undocumented people to move into the formal economy without facing the risk of deportation. This can only happen in conjunction with a sweeping regularization program – which Standing doesn’t call for.

“… not likely to undermine persistent structural group differences, and often reinforce them… Thus, to remove unjust inequality it is necessary explicitly to recognise group difference and either compensate for disadvantage, revalue some attributes, positions or actions or take special steps to meet needs and empower members of disadvantaged groups.”[12]

Even the most well-intentioned policies can spur inequality and entrench relative inequality. Relative inequality is the difference between how well off one group is in relation to another. Immigrants in Canada make, on average, $233 a month less than people born in Canada.[13] Racialized immigrants, especially racialized immigrant women, make far less than white immigrants.[14]
Without actually dealing with this systemic wage gap, universal benefits leave these disparities intact.

Proponents of basic income argue it will be a force for social justice. However, as our analysis demonstrates, the claim is without merit since BI proponents fail to adequately address the implication for migrants. At best, their proposals fail to comprehend the divisive and exclusionary role of the immigration system, resulting in proposals where the inclusion of some migrants is mere rhetorical flair. At worst, their plans bear a troubling resemblance to the xenophobic vision of the right in their attempts to dissuade and curtail migration. Between these two poles are those who simply don’t factor migrants into their plans for BI; this is a profound oversight and they cannot be as progressive as they claim. Furthermore, universal benefits impact marginalized communities differently and risk entrenching the social inequalities of capitalism. A UBI will be more unjust for some groups than for others. We reject the notion that social justice can ever be won for any of us without winning it for all of us, including migrants. This is one of the many reasons we reject the basic income. •

Yogi Acharya is an Organizer with the Ontario Coalition Against Poverty.

A.J. Withers is an Organizer with the Ontario Coalition Against Poverty and Ph.D. candidate at York University who has received support from the Social Sciences and Humanities Research Council for their doctoral research.

3.
Sunera Thobani, Exalted Subjects: Studies in the Making of Race and Nation in Canada, Toronto: University of Toronto Press, 2007, p. 139.

11.
Although we disagree with Standing’s definition of the working class.

13.
Smith, William C., and Frank Fernandez. “Education and Wage Gaps: A Comparative Study of Immigrant and Native Employees in the United States and Canada,” Program for the International Assessment of Adult Competencies, 2015.

Yogi Acharya is a writer and an organizer with the Ontario Coalition Against Poverty and the Raise the Rates campaign.