Quebec in Solidarity with Catalonia

Prison vs. Ballot Boxes in Spain: A Toxic Cocktail in a Democracy

As democrats, we feel an obligation to protest strongly to the government of Mariano Rajoy. After having deployed in 2010 the arsenal of the Constitutional Court to block an agreement that granted further autonomy to Catalonia within Spain, this government is now working to block the electoral process of the Catalan people. Over and above the right of peoples to self-determination, recognized in the United Nations Charter, it is democracy itself that is now being battered. 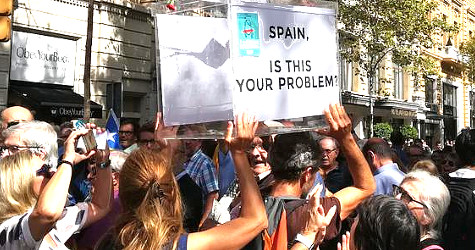 This is intolerable. It is intolerable to turn our heads and leave to their fate the Catalan people, denying them in the eyes of the entire world the right to vote and declare where they stand on their political future. It is intolerable as well to see a country like Spain, which claims to be a democracy, threaten to prosecute, even imprison, mayors and members of the Catalan government on the sole ground that they are organizing or collaborating in the organization of a referendum. Prison against ballot boxes is a toxic cocktail in a democracy.

Spain is hiding behind the decision of the Constitutional Court, which is now claiming that the referendum fervently demanded by the Catalan people and decided by their Parliament is illegal, when it is the Spanish government that itself solicited this opinion. We wish to remind the Rajoy government that holding a referendum is, in the first place, a political decision that could perfectly well have been agreed with the Catalan Generalitat, as was done in similar circumstances in 2014 between the United Kingdom and Scotland. There is no future in trying to prohibit to a people the right to express themselves on their political status.

To Express Our Solidarity

The Catalan people are conducting an exemplary battle in defense of this “right to decide,” which has many times led them to take to the streets peacefully. They are not alone in this struggle. The Québécois have twice managed to vote on their political future, in 1980 and in 1995, notwithstanding the arsenal deployed by the federal government: violation of the rules of referendum participation, application to the Supreme Court to rule on Quebec’s right to secession, adoption of the Clarity Act, and more recently a court challenge of Law 99 adopted by the National Assembly. Today it is the turn of the Quebec people to express their solidarity with the Catalan population in its legitimate right to declare itself democratically on its political status.

We call on the Spanish government to cease adding to the mess for which everyone, including Spain, will pay the price. Its intransigence and its authoritarian drift have already done a disservice to its cause, as many Catalans have now left behind the autonomist nationalism they have practiced historically in order to embrace the cause of independence. The Spanish government must put an end to the escalation by forthwith renouncing the heavy-handedness, the antidemocratic maneuvers and the threat to withdraw its current autonomous status from Catalonia.

Mr. Rajoy’s government has overstepped the mark not only by trying to confiscate election materials, but by going so far as to seize the leaflets of the yes camp. It doing so, it offends against freedom of expression, devitalizing and undermining democracy.

Finally, the atmosphere of threats and intimidation currently prevailing in Catalonia is unhealthy and dishonours Spain and the efforts of the international community to base the functioning of our political institutions on values of democracy, peace and respect for people’s rights.

It is up to the Catalan people to decide alone and in full freedom their political future, and we, faced with so many atrocities, must be numerous in expressing our solidarity with them and coming out in defense of democracy. •

This was first published by Le Devoir, 21 September 2017. Translated by Richard Fidler.