UK Unions Call for Energy to be Returned to Public Ownership

The annual congress of the UK Trades Union Congress (TUC) has passed a historic composite resolution on climate change that supports the energy sector being returned to public ownership and democratic control.

The resolution – carried unanimously – calls upon the 5.7-million-member national federation to work with the Labour Party to achieve this goal, as well as to: implement a mass program for energy conservation and efficiency; lobby for the establishment of a “just transition” strategy for affected workers; and, investigate the long-term risks to pension funds from investments in fossil fuels. 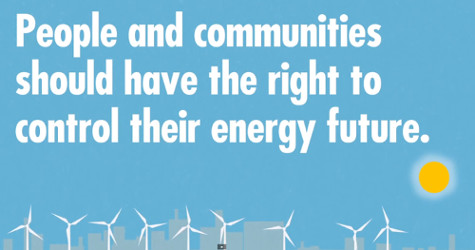 The Labour Party’s 2017 election manifesto, For the Many, Not the Few, pointed to the failures of electricity privatization, energy poverty, the need to honor the UK’s climate commitments, and to put the UK on course for 60% of its energy to be met by zero carbon or renewable sources by 2030.

The Manifesto also committed to “take energy back into public ownership to deliver renewable energy, affordability for consumers, and democratic control.” It calls for the creation of “publicly owned, locally accountable energy companies and co-operatives to rival existing private energy suppliers.”

Moved by Sarah Woolley, Organising Regional Secretary for the Bakers, Food and Allied Workers Union (BFAWU), the resolution refers to the “irrefutable evidence that dangerous climate change is driving unprecedented changes to our environment,” as well as the risks to meeting the climate challenge posed by Trump’s announced withdrawal from the Paris Agreement, and by the chaotic approach to both Brexit and broader policy by the current Conservative government.

The resolution affirmed that combating climate change and moving toward a low-carbon economy cannot be left to markets, but requires a strong role for the public sector in driving the transition. In supporting the resolution, several speakers referred to the devastation unleashed across the Caribbean over the previous several days by Hurricane Irma – the most powerful Atlantic Ocean storm in recorded history – and across southern Texas only days before that by Hurricane Harvey.

Cliff Holloway of the train drivers’ union ASLEF referred to the major role of transport in the UK’s greenhouse gas emissions. Rail union RMT representative Glenroy Watson emphasized the need for worker representation in developing solutions, and for greater support for the global South, which has not been adequately supported in its adaptation efforts. Speaking for UNISON, Nicky Ramanadi highlighted the issue of fuel poverty, while Ele Wade, speaking for the power sector union Prospect, noted that emissions reductions were trailing behind established targets. Iain Dalton of the retail union USDAW referred to the failures of the private sector, emphasizing that “public ownership of energy under democratic control is the crucial part of this composite resolution.”

Assistant General Secretary Chris Baugh of the Public and Commercial Services Union (PCS) also spoke in favor of the resolution. A video segment of his comments is available on Youtube.

Also supporting the resolution was the Fire Brigades Union (FBU), whose Andy Noble urged UK unions to support Trade Unions for Energy Democracy, and to join with unions around the world in the global fight for democratic control of energy.

Notably, the text of the resolution also formally recognized the important work of TUED partner, The Transnational Institute (TNI), based in Amsterdam, whose recent report, “Reclaiming Public Service: how cities and citizens are turning back privatization,” highlighted the global trend toward re-municipalization of public services, including energy.

Following the vote, Martin Mayer, UNITE’s representative to the Labour Party’s National Executive Committee, told TUED: “Today British trade unions for the first time agreed a visionary strategy to combat climate change. That must mean taking back control of our privatised energy and a serious call for a just transition to protect jobs.” Jenny Patient of Sheffield Climate Alliance – part of the Campaign Against Climate Change Trade Union group – added, “We know there are good and valuable jobs in the transition to zero carbon and this resolution shows the way forward by making this integral to a cross-sector industrial strategy that can rebalance and rebuild industries and protect workers.” •

Congress notes the irrefutable evidence that dangerous climate change is driving unprecedented changes to our environment such as the devastating flooding witnessed in the UK in 2004.

Congress further notes the risk to meeting the challenge of climate change with the announcement of Donald Trump to withdraw the US from the Paris Climate Agreement. Similarly, Brexit negotiations and incoherent UK government policy risk undermining measures to achieve the UK carbon reduction targets.

Congress welcomes the report by the Transnational Institute Reclaiming Public Service: how cities and citizens are turning back privatization, which details the global trend to remunicipalise public services, including energy, and supports efforts by unions internationally to raise issues such as public ownership and democratic control as part of solutions to climate change.

Congress notes that transport is responsible for a quarter of the UK’s greenhouse gas emissions and believes that a reduction in carbon dioxide levels must be the basis of the UK’s future transport policy in addition to building public transport capacity and moving more freight from road to rail.

Congress believes that to effectively combat climate change and move towards a low carbon economy we cannot leave this to the markets and therefore need a strong role for the public sector in driving the measures needed to undertake this transition. Congress notes that pension schemes invest billions of pounds into fossil fuel corporations.

To this end, Congress calls on the TUC to:

Trade Unions for Energy Democracy (TUED) is a global, multi-sector initiative to advance democratic direction and control of energy in a way that promotes solutions to the climate crisis, energy poverty, the degradation of both land and people, and responds to the attacks on workers’ rights and protections.