In a series of landmark statements following the May 2017 election of the pro-reform President Moon Jae-in, Korean energy, transport and public service workers have called for “a just energy transition” allowing the sector to “function as a public asset under public control.” Unions support the new government’s decision to close the country’s aging coal-fired and nuclear power stations, and its planned reconsideration of two new nuclear facilities – Kori 5 and Kori 6.

In a statement issued in late July, the Korean Public Service and Transport Workers’ Union (KPTU) and the Korean Labour and Social Network on Energy (KLSNE), a coalition of unions and civil society organizations, said, “We actively support the policy of phasing out coal and nuclear and expanding clean renewable energy.” The statement urged the development of, “A roadmap for energy transition that ensures public accountability and strengthens democratic control of the energy industry.” KPTU and KLSNE also committed “to work together with the public and civil society to achieve a just transition.”

The Korean Labour and Social Network on Energy (KLSNE) and the Korean Public Service and Transport Workers’ Union (KPTU) Support the Government’s Policy of a Transition toward a Coal-free, Nuclear-free Energy System. 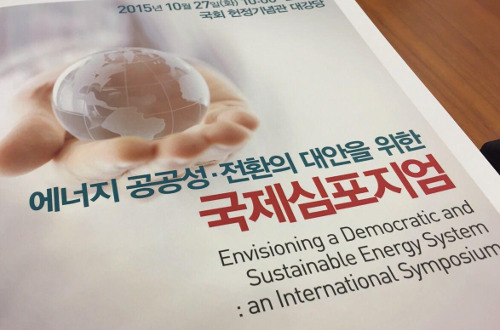 The Moon Jae-in government, which was elected on a pledge to phase out coal and nuclear generation and scale up clean renewables, is now moving quickly to enact these promises. Following a temporary shutdown of old coal-fired power plants, the Kori 1 nuclear reactor was permanently closed down on June 19. The government is now reconsidering plans to build new nuclear reactors Kori 5 and 6. The KLSNE and KPTU declare our support for these policies and our intentions to play a leading role in bringing about a just energy transition.

The government’s establishment of a commission to assess public opinion on the plans to build Kori reactors 5 and 6 on July 24 sparked immediate outcry from nuclear power business interests and pro-nuclear power scholars. The press has exacerbated this conflict with sensational reporting. It is deeply regrettable that those who oppose the government’s policies are speaking only from their individual self-interest without putting forth viable alternatives.

It is even more regrettable that the voices of workers at the Korean Hydro & Nuclear Power Corporation and other nuclear-power related companies who support a just transition are being stifled in the process. We stress the importance of recognising the difference between nuclear power business interests and the nuclear power workers. These workers are the people most easily exposed to radiation and at the most risk in the case of accidents. Electricity and gas workers, who have been discussing paths for a just transition for many years now, are sure that nuclear power workers will soon join us in this effort.

During the last nine years of conservative rule, South Korea’s energy policy has been focused on restructuring aimed only at meeting the interest of corporations (i.e. privatization). The result has been the expansion of nuclear power and private coal and liquefied natural gas (LNG) generation and massive profits for corporations. Energy policy has been consistently undemocratic and anti-climate.

With South Korea now facing the threat of earthquakes and air contaminated with fine dust it is only natural that we energy workers, who have fought for almost two decades to stop privatization and protect our public energy system, would take a leading role in the fight for a just energy transition.

Given the scale on which a transition must take place, it is predictable that many conflicts will occur among the various stakeholders involved. Nonetheless, we must seek the best path for transition by applying a standard of justice based on public safety, happiness and public accountability. This requires moving away from an energy policy based on the interest of big business toward one that seeks to minimise the harm to ordinary people and workers, while strengthening public accountability and democratic control. As can be seen in the statement entitled “The Korean Power Plant Industry Union Welcomes President Moon Jae-in’s Enactment of Measures to Reduce Fine Dust,” released on May 16, the majority of energy workers support the policy of phasing out coal and nuclear and scaling up clean renewable energy and are ready to put our collective future ahead of immediate personal interests and participate actively in the process of energy transition.

Energy transition must not mean that all the burden is put on the public through increased electricity or gas prices or onto workers through job cuts. Large corporations, which for years have enjoyed subsidies and guaranteed profits while they contribute to climate change, must pay their fair share of the costs. In addition, the new government’s policies can only be enacted if the differing positions of various stakeholders are mediated in the process of mapping out the transition. The most immediate goal of the transition must be the provision of a safe and reliable supply of electricity and gas, and a fair repositioning of energy workers as producers. These tasks will be achievable if the energy industry is reformed to function as a public asset under public control, which would correct for the distortions caused by the drive toward privatization led by conservative governments and business interests over the last several years.

Around the world large energy corporations are the main obstacles to energy transition policies. For this reason it is important that the government, the National Assembly, the public, environmental and other civil society organizations and energy industry trade unions work together to come up with a plan for democratic control over energy capital. The problem of employment for energy workers that will necessarily occur can also be solved through a publically controlled transition and democratic reform of the energy industry. Within the overall framework of a ‘just public energy transition’ we seek not only to tackle the issue of employment, but also to increase public accountability and strengthen democratic control. In this process we hope to work hand-in-hand with the energy-using public. We now invite the government to come forward with concrete proposals for public democratic reform of the energy industry.

With the goal of ensuring that this historic transition can move forward unwaveringly in the right direction, KLSNE and KPTU clarify the following position.