In Defence of Democratic Rights in Catalonia

In Catalonia an important process of independence is taking place against Spain. At the request of the Popular Party (PP), the Spanish Constitutional Court declared the Catalan Statute of 2010, unconstitutional. This statute was negotiated between the Government of José Luis Rodríguez Zapatero and later endorsed by the Spanish Parliament. Since then, the number of Catalans who want to become independent from Spain has not stopped growing. 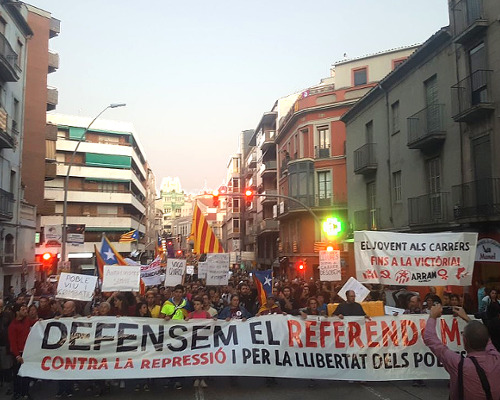 The degree of autonomy that Catalonia was going to reach was far too much for a right-wing party as the PP, despite the 2010 statute cuts which were decided by the Spanish parliament.

Chronology of the Process of Independence of Catalonia

This chronology is not complete, but it shows the milestones in this dispute.

The Spanish Left and the Catalan Referendum

Both Podemos and Izquierda Unida support a referendum but with guarantees. Podemos sees the referendum as a citizen mobilization, but believes that it cannot be binding. Izquierda Unida, for its part, says that the question of the referendum leaves out people who want a federal state, to which the various existing nationalities of the Spanish State can freely adhere.

Esquerra Unida I Alternativa (EUiA), the political counterpart of Izquierda Unida in Catalonia, decided on 17 September to appeal to the Catalan people to participate in the referendum, although EUiA is against the independence of Catalonia.

And here I come to the most controversial point. Who leads the process of independence? The Catalan bourgeoisie is not exactly a very democratic bourgeoisie and is immersed in many scandals of corruption. Although the movement for independence is very transversal, it is highly questionable that independence will serve the working classes, as the parties of the Catalan bourgeoisie have approved in the Catalan government the biggest cuts in health and education among others and have supported the central government when the Spanish parliament has passed anti-democratic laws such as the “Law Mordaza” that cut many democratic rights in order to curb the protests of the citizens against antisocial policies. I personally would vote NO for independence for the reasons mentioned above. However, this does not detract from the right of self-determination of the people. I sincerely believe that the NO would win in a referendum, if it could be carried out with the necessary guarantees, and a democracy should allow the people to decide about their future.

The 2010 surveys indicated that 35% of Catalans wanted independence, but now the surveys say that there are almost 50% of Catalonians that want independence. In addition, several surveys point out that 80% of the Catalan people want a referendum and 60% have said that they will participate, even if the Spanish State forbids it.

The repression and intransigence of the government of Mariano Rajoy have made many people in Catalonia stand for independence. And if his party continues with this repressive policy, it is expected that soon this number will increase.

I had already finished this article, but the events of today, 20 September, in Catalonia made me have to expand it. This morning the Civil Guard and the National Police Corps entered in several Catalan government departments, they have registered the departments and arrested some 14 people, including officials of the government of Catalonia. The leftist parties in Spain have called for a fight against this new repressive spiral of the central government of the PP that is a de facto state of exception in Catalonia.

It is no longer just the right of people to decide. The leaders of Podemos and Izquierda Unida have said: “We must also defend democratic rights because of this dictatorial move by the Spanish government.” They have called for actively defending the democratic rights that are being cut drastically in the Spanish State. In response, tens of thousands of people have concentrated on ‘Puerta del Sol’ in Madrid and other Spanish cities.

What has become clear is that the ruling party has not been detached from its fascist roots. It is necessary to remember that this party was created by seven ex-ministers of the dictator Franco. •

José Luis Martínez is a social activist and member of the Spanish Communist Party (PCE) and Izquierda Unida. He has published books on Latin America and articles in Mundo Obrero, the newspaper of the PCE.

The Situation in Catalonia

Because of the call for next October 1st to carry out a referendum for independence in Catalonia and due to the repressive and authoritarian reaction of the Government of Spain, Izquierda Unida states:

1. In Catalonia a political conflict of historical nature exists, it requires a political solution that can only be resolved through negotiation and dialogue. In addition, among the available democratic mechanisms an agreed referendum should be incorporated that allows the Catalan society to decide on its future. 80% of Catalan society has expressed an interest in exercising the right to decide, and this cannot be ignored.

2. The Government of Spain is not addressing this political problem with a democratic attitude. On the contrary, it is using repression and authoritarianism. The violation of fundamental rights committed by the Spanish Government is very serious and affects all the citizens of the State and not only a part of the Catalan population. The attitude of the Spanish Government is antidemocratic, irresponsible and reactionary.

3. The call made by the Government of the Generalitat for October 1st does not solve the problem either, given that it lacks sufficient democratic and political guarantees and also the process does not appeal to a considerable part of Catalan society. In addition, we note how the roadmap of the Catalonian Government has also revealed its lack of social content and democratic regeneration. Consequently, we cannot recognize the results of October 1st.

4. We support the implementation of the assembly of democratic parliamentarians throughout the State, which calls for a political solution and denounces the repression of the Government as a serious setback for freedom.

5. We defend that the best solution to the conflict is a negotiation that contemplates a constituent process to construct a model of federal State. This constituent horizon is necessary because our country is plurinational and because the Constitution of 1978 is exhausted as a consequence of the neoliberal offensive in recent years. We need a new model of coexistence that guarantees human rights, something impossible under the current framework.

6. We understand that “October 1st,” given the circumstances, is currently a mobilization that can serve as a demand for the right to decide and as a protest against the irresponsible actions of the Government. Izquierda Unida has always been in the mobilizations in favour of the right to decide. Consequently, we believe it is necessary that each person decides to participate or not according to their personal criteria.

7. We will continue to work with EUiA on the solutions to this political conflict. From IU we consider that the call for an effective referendum, which facilitates the massive participation of Catalan society with the possibility to express the different options and that involves a serious and deep debate on the model of State, is the best solution for the exercise of the right to decide. Our proposal is a solidary federal republic. Therefore, being a federalist force we recognize the right of self-determination of the people, as well as the Catalan people. We defend the realization of a referendum and commit ourselves to work to make it possible. •