The Ordeal of Hassan Diab

In December 2014, Hassan Diab, the former Carleton University sociology professor, husband to Rania, father of a lovely toddler daughter and one month before the birth of their delightful baby son, was whisked from his home by Canadian officials and extradited to France. The reason: suspicion that he was involved in the bombing of a Paris synagogue in 1980. It did not seem to matter to Canadian and French authorities that he was in Beirut at the time of the bombing, that his fingerprints did not match the proffered evidence and that the handwriting analysis was flawed. There was no personal history that could connect Hassan Diab in any way with this deed, and Canadian judge Maranger said that the evidence was “very problematic,” “convoluted,” “very confusing,” and “with conclusions that are suspect.” Nor did it matter that Canadian extradition policy does not protect the rights of Canadian citizens. 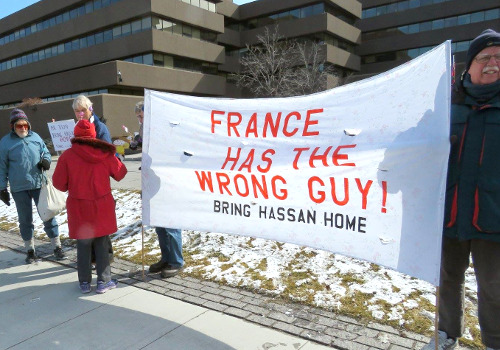 Hassan Diab’s ordeal began in October 2007 when he noticed that unidentified agents were following him and when someone tried to break into his home. He reported these incidents to the Ottawa police, but the intimidating and intrusive surveillance persisted. He was arrested in 2008, and after many legal appeals he was extradited to France in 2014. He has now spent almost 1000 days in a French prison and is yet to be charged. To date, the Canadian government is silent. Not a word from Prime Minister Justin Trudeau, Foreign Minister Chrystia Freeland, Justice Minister Jodie Wilson-Raybould. No mea culpa from the former Harper government.

Injustice – Past and Present

Canada just celebrated 150 and the French republic is 225, but innumerable injustices persist. Hassan Diab is a case in point because what is happening to him eerily repeats the past. Every person educated in France, and many Canadians, know about the Dreyfus Affair. At the turn of the 20th century, the Jewish French soldier Alfred Dreyfus was charged with treason and given a life sentence at Devil’s Island. The accusation was based on fraudulent handwriting analysis. Emile Zola, the eminent French writer, wrote about the framing of Dreyfus in J’Accuse, a rallying cry against racism and state injustice:

“…the ultimate slap in the face to any notion of truth or justice. Dreyfus is innocent… Hiding behind this odious anti-Semitism which will kill the great and liberal France – It is a crime to exploit patriotism for works of hate.”

The actual perpetrator was known to French authorities but was never charged. Dreyfus remained in prison and it took years for him to be exonerated. Just like Dreyfus, Diab’s case rests on fraudulent handwriting analysis, and racism finds its current expression in Islamophobia. French and Canadian authorities appear to ignore this history.

Not long after the Dreyfus Affair, Franz Kafka wrote about judicial secrecy and arbitrary detention in The Trial, a novel of psychological terror in which the prisoner is not even informed about the accusations or the identity of his accusers. Hassan Diab wrote a poem called “The Trial”:

“Kafka visited me… I told him about my trial and he told me about his… It pained us very much that history keeps repeating itself… Dreyfus was one hundred years ago. Did we learn anything? Did anything change?”

In the great contemporary poem J’Accuse, the Israeli poet Aharon Shabtai writes that it takes a whole orchestra to perpetrate state crimes. He cites: “the TV announcer and the professor, a long lineup of Men of Letters. Each one of these authorities sees to his part in the plan: one’s in charge of liquidation, another of the daily harassment… the staged negotiations, the corporate politics…” At the time of Hassan’s initial detention, there was a culture of indifference to state violence against civilians by the highest authorities in Canada. Former Prime Minister Harper said that Israel’s hugely disproportionate attack on Gaza’s trapped, civilian population was “measured.” Liberal Party leader Michael Ignatieff, recognized as a global authority on human rights, initially said that he “did not lose sleep” over Israel’s attack on civilians in Qana. Ignatieff was instrumental in crafting the Responsibility to Protect and the “lesser evil” doctrines which justified torture, deportation, extrajudicial targeting of civilians, and wars in order to prevent worse violence. Militarism insidiously infects everyday life.

Cui bono? Who benefits from contriving a villain? Hassan Diab is a gentle and thoughtful man, an academic, a family man who likes to cook. In Canada, Diab’s incarceration, his suspension from his university position, and his extradition has a strong and powerful advocate in Avi Benlolo, CEO of the Friends of the Wiesenthal Centre. Simon Wiesenthal was a Holocaust survivor who became a “Nazi hunter” after World War II. The Wiesenthal Centre more recently hunts alleged Islamic terrorists. The Israeli newspaper Haaretz reported that Benlolo called “Carleton University’s reinstatement of Hassan Diab ‘shocking… inexplicable, outrageous’ … and said the university was treating ‘an accused terrorist mass murderer as if he was charged with drunk driving’.” Guilty until proven innocent? Benlolo’s global network includes “senior officials in law enforcement” and “thought-leaders,” G.W. Bush, Bill Clinton, Shimon Peres, Tony Blair, John Howard, Rudy Guiliani. He accompanied former P.M. Stephen Harper to Israel along with a member of the violent and racist Jewish Defense League. This year Benlolo is the honoree of the University of Haifa, “in recognition of his leadership as a prominent Canadian human rights activist promoting tolerance and democracy…”1

“Hunting” people allows victims to become perpetrators. The orchestra of militarism permits all-out-war, incarceration of innocents, and petty banalities of evil like not even allowing Hassan Diab to say goodbye to his daughter when he was extradited. For Canada at 150 and France at 225, many in power have yet to understand justice. •