The Canada Infrastructure Bank (CIB) will create a pipeline of privatization for our public transit systems. Corporations will be able to extract long-term profit from public transit fares and public subsidies. 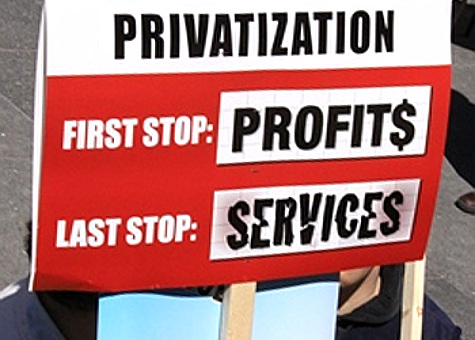 Our governments subsidize public transit because it’s critical infrastructure for our communities: to get us from place to place, to reduce traffic congestion, and to green our environment. When we allow corporations to plan, finance, operate, maintain and own public transit, we funnel ridership fares and government funding into corporate coffers.

The CIB will give unprecedented control and decision-making power over our public transit infrastructure to private sector investors. This means the public interest will take a back seat in transit planning and development.

Many of our public transit systems in recent years have been built using public-private partnerships (P3s). The CIB will open the door to even further privatization, allowing profit to drive public transit planning and decision-making.

Almost one-third of the $81.3-billion in new infrastructure spending promised in Budget 2017 is for transit infrastructure over 11 years. This includes $20.1-billion through new public transit bilateral agreements between the federal government and provinces and territories and $5-billion through the new CIB. Canadian and foreign investors are expected to put in up to $4 in private funds for every public dollar in the CIB.

The Liberals have played a privatization shell game. While the mandatory P3 screen will end, which had forced all large infrastructure projects through a P3 evaluation process, the CIB is explicitly designed to promote privatization. And 20 per cent of federal public transit funding will be funneled through this privatization bank in addition to the expected private sector investment.

A majority of CUPE members in the transit sector – over 7,100 – are bus drivers employed by 19 municipal transit authorities in Quebec. CUPE also represents workers who do maintenance work on public transit systems that can be outsourced in many transit privatization projects.

Privatization also hurts the public. Transit users may face higher transit fares or have to use systems where decision-making on routes has been guided by private profit rather than the public interest. Privatization projects may also limit community involvement and participation in key decisions. Furthermore, broader societal priorities such as reducing greenhouse gas emissions are easily ignored in privatization projects.

There are many examples of transit privatization in recent years that can give us some indication of the dangers involved. One example, which may receive funding through the CIB, is the $6-billion Réseau électrique métropolitain (REM) light rail project in Montreal.

This project to connect Montreal’s south shore, the airport, the city centre and Deux-Montagnes has been designed and partially financed by the Caisse de dépôt et placement du Québec, which manages the funds of the Quebec Pension Plan and other public pension funds. Decisions about the route, technology and compatibility with existing transit lines have been driven by what suits the profit interests of the Caisse and private developers rather than the public.

The rail line will be maintained, operated and even owned by the Caisse – at significant extra cost. A La Presse investigation estimated the REM will operate with a funding shortfall of approximately $240-million per year. It’s possible public transit fares across the entire city will increase in order to generate these profit levels.2 Regardless, the public will pay for the higher costs through subsidies from municipalities or the Quebec government or higher fares for transit users.

With the REM, the Quebec government has outsourced public transit planning, design, operation and maintenance to the Caisse. They’ve even sold off segments of their core public transit infrastructure. This will make it difficult to further expand Montreal’s public transit system, integrate it with other transportation networks such as Via Rail and properly oversee the service. This privatization scheme has resulted in a public transit plan that maximizes private profit at the public’s expense.

Unfortunately, we have many cases of public transit privatization gone wrong across the country. The Canada Line P3 in Vancouver, British Columbia went overbudget, lacked innovation and integration with the broader transit system and undermined public accountability. The Ontario Auditor General review of P3 projects, including six transit projects, found that P3s cost $8-billion more than if they had been delivered publicly due to increased private-sector financing costs and a lack of risk transfer. Furthermore, a review of Edmonton’s P3 LRT development indicated that savings were likely going to be found through poor labour practices. Unfortunately, more transit privatization blunders will be coming our way through the privatization bank.

This article was first published on the CUPE website.