During the election campaign there was a brief period of anxiety about Clinton or Trump taking possession of the nuclear code, with the power to eradicate our species at the push of a few buttons. But where has discussion, let alone mention, of nuclear weapons gone? An exception is the brief article by Robert Dodge in CounterPunch about the Bulletin of Atomic Scientists advancing the Doomsday Clock to 2 ½ minutes before the midnight of human extinction caused by nuclear war or climate change: “Nuclear weapons are not even on the radar of our congress. Their phones are not ringing off the hook about nuclear weapons.” 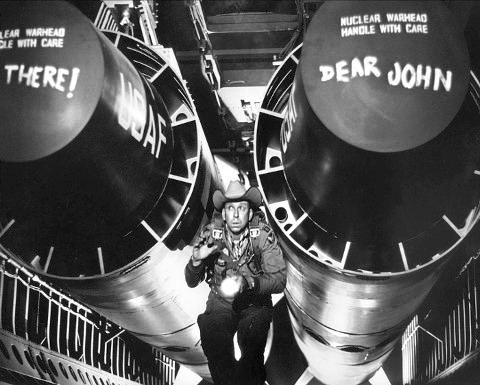 In a January 30th interview with Sonali Kolhatkar, George Lakoff discussed Trump’s trial balloon about nuclear weapons in which Trump said that if we have them, we should use them. Lakoff said that there was a very brief reaction and then it’s gone, signaling that the public doesn’t care. Doesn’t care or doesn’t know? Harvard professor Elaine Scarry has said that some of her students had never heard of Hiroshima and Nagasaki.

It is a dangerous time to not know about nuclear weapons. Trump inherited from Obama the ongoing U.S./NATO/Israeli escalation and military encirclement against Iran, China, and Russia, and the $1-trillion program to modernize nuclear weapons. On January 28th the Ron Paul Institute reported that Rep. Alcee Hastings (D-FL) introduced a bill to Congress: “… it specifically authorizes the president to launch a pre-emptive war on Iran at any time of his choosing and without any further Congressional oversight or input, as the President determines necessary and appropriate in order to achieve the goal of preventing Iran from obtaining nuclear weapons” (emphasis added).

Among the challengers to Iran’s purported nuclear threat are Richard Falk (UN Special Rapporteur on Human Rights in the Occupied Territories, expert on nuclear weapons and international law): “What has Iran done to justify this frantic war-mongering … the outright threats emanating from Israel and the U.S. that leaves ‘all options’ on the table”? Seymour Hersh investigated Israel’s nuclear weapons program in his book The Samson Option. About Iran, Hersh wrote of “the repeated inability of the best and the brightest of the Joint Special Operations Command to find definitive evidence of a nuclear-weapons production program in Iran….. with lots of belligerent talk but no definitive evidence of a nuclear-weapons program.”

And perhaps most damning, the U.K. Guardian: “Leaked spy cables show Binyamin Netanyahu’s dramatic declaration to world leaders in 2012 that Iran was about a year away from making a nuclear bomb was contradicted by his own secret service, according to a top-secret Mossad document.” Robert Fisk in The Independent 2012: “The Israeli President warns us now that Iran is on the cusp of producing a nuclear weapon. Heaven preserve us. Yet we reporters do not mention that Shimon Peres, as Israeli Prime Minister, said exactly the same thing in 1996. That was 16 years ago. And we do not recall that the current Israeli PM, Benjamin Netanyahu, said in 1992 that Iran would have a nuclear bomb by 1999. That would be 13 years ago. Same old story. We’ve been here before – and it suits Israel that we never forget ‘Nuclear Iran.’”

Noam Chomsky reported that a nuclear Iran suited the U.S. pre-1979, before the Islamic revolution overthrew the brutal shah regime. “A secret agreement made between MIT and the Shah of Iran, … pretty much amounted to turning over the Nuclear Engineering Department to the Shah.” Cheney, Rumsfeld, Kissinger, and Wolfowitz “wanted Iran to develop nuclear facilities and they were allies at the time.”1

Demonizing Iran at this time deflects attention from real nuclear dangers. According to the 2016 report by the Stockholm International Peace Research Institute (SIPRI), the nine nuclear states together possess a total of approximately 15,395 nuclear weapons, with the United States and Russia accounting for more than 93 per cent. The public likely does not know that shortly after the UN pledged to end the scourge of war, shortly after two atomic bombs killed minimally 140,000 Japanese people, that the U.S. embarked on developing far more lethal hydrogen bombs. The explosive force of the Hiroshima bomb was 15-16 kilotons, whereas today’s bombs are in the range of 100 Kt to 550Kt of TNT (6 to 34 times the Hiroshima force). “Even a small-scale nuclear war involving one hundred Hiroshima-type (15 Kt) nuclear bombs between two countries such as India and Pakistan, would have a devastating effect on Earth’s climate” and “it is unlikely there would be any survivors.” “At most, this would involve only 0.3% of the world’s nuclear explosive power.”2

Nuclear weapons are deployed by intercontinental ballistic missiles, by submarine launched ballistic missiles, and by strategic bombers. Submarines carrying up to 24 missiles, with each carrying four to five warheads, possibly as many as 144 warheads per submarine, constantly patrol the oceans. In a striking example of apparent disregard for the people of this planet, a CNN newscast from August 2016 shows a smiling Michelle Obama “christening” a General Dynamic Virginia-class submarine manufactured in Connecticut, named after her, and designed to carry nuclear weapons. According to the Union of Concerned Scientists, even though a Russian first-strike is not a credible risk, the United States still keeps its 450 silo-based nuclear weapons, and hundreds of submarine-based weapons, on hair-trigger alert and ready to launch within ten minutes toward their targets.

The five year UN Nuclear Non-Proliferation Treaty (NPT) Review met in April 2015, following four years of preparatory meetings. Given the volatile tension between the U.S. and Russia and China, there was an urgency to take nuclear weapons off high alert status. Instead, the focus of the month-long meeting was diverted to Iran’s nuclear weapons and to political opposition by the U.S., U.K., and Canada to establishing a nuclear weapons free zone in the Middle East in order to shield Israel’s nuclear program from international laws and oversight. In violation of the NPT, Germany has provided Israel with a fleet of advanced submarines equipped to fire long-range nuclear-tipped cruise missiles. Astonishingly, two of these submarines, which carry weapons of mass destruction, were given to Israel as Holocaust reparation! According to Netanyahu, the submarines carry nuclear weapons pointed at Iran. “The Obama administration’s pretense that it knows nothing about any nuclear weapons in Israel makes intelligent discussion about the dangers of nuclear weapons in the Middle East all but impossible.” India provides Israel with a launching site in the Indian Ocean.

During the Cold War, nuclear weapons strategy was based on deterrence, or mutually assured destruction (MAD). Deterrence necessitated the capacity to retaliate with nuclear weapons, so the strategy in itself required weapons proliferation. Shortly after 9/11, G.W. Bush withdrew from the Anti-Ballistic Missile Treaty (ABM). Missile defence systems are designed to destroy incoming nuclear missiles shortly after they are launched. There is a belief within the military that the U.S. could destroy its enemy’s full nuclear arsenal and prevent retaliation. Nuclear strategy shifted from deterrence to pre-emptive first strike, with the belief that a nuclear war is winnable and acceptable.

Frustrated by the decades-long paralysis in regulating and eliminating these weapons, and fearful that there is even more likelihood of nuclear war than during the Cold War, the UN-formed Open Ended Working Group (OPEG), made up of all nations, is now focusing entirely and explicitly on eliminating nuclear weapons. The nuclear-armed nations, plus many liberal democracies like Canada, Italy, Germany, Spain and other NATO countries, have voted against the majority. Iran voted for.

The late Jonathan Schell dedicated his life to the abolition of nuclear weapons. He wrote that nuclear exterminism did not come from 20th century totalitarian regimes, but that “the most radical evil imaginable – the extinction of the human species – [was] first placed in the hands of a liberal republic.” A graver suspicion was that the United States and its allies did not build these weapons to face extraordinary danger, but because of “an intrinsic element of the dominant liberal civilization itself – an evil that first grew and still grows from within that civilization rather than being imposed from without.”3 Entire societies, the human species itself, are merely a pawn. Schell writes that nuclear strategy is the “very epicenter of banality” and is manufactured in think tanks and academic institutions from the pseudoscience of game theory.

The anti-nuclear and antiwar movements have been relatively silent about Israel and about Obama’s nuclear program. One current political opening may be women’s timely activism on the ground, with the precedent of women having led the successful opposition to atmospheric nuclear weapons testing in 1961. Women, in their historical role of caring for the young and old, for growing food and carrying water, are the unseen victims of war and should have the power to veto. •