Mapping the Canadian Left: Sovereignty and Solidarity in the 21st Century

If there is a single theme that has distinguished left politics in Canada and Québec at least since the 1960s, it is the aspiration to national sovereignty. For both the social-democratic and radical left in Québec, the pursuit of social justice is inextricably bound up with national liberation and the creation of a sovereign state emancipated from the colonial chokehold of the Canadian federation. Meanwhile, a considerable part of the left in English Canada for decades similarly conceived the liberation of the Canadian economy and foreign policy from domination by the superpower to the south as the starting point of any viable left project. 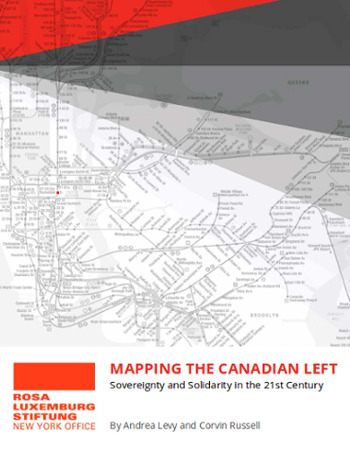 And today the renewed struggle for self-determination of Indigenous Peoples in Canada and Québec is slowly changing the character of left politics across the country, as the long overdue reckoning with the brutal historic dispossession of the original inhabitants of the places we call Canada and Québec “unsettles” our ways of seeing, putting the concept of settler-colonialism in the centre of much contemporary left analysis and activism.

It is perhaps an irony but not an accident of history that these parallel and sometimes conflicting nationalisms have asserted themselves most forcefully in an era of accelerating capitalist globalization when the real scope of national sovereignty is being progressively narrowed in practice by a wired interdependent world, increasingly far-reaching corporate trade agreements, and a global ecological end-game which calls for strategies that lie beyond the purview of national states.

The colonialism built into the bedrock of the Canadian state has bequeathed deep fractures and wounds which are, naturally, reflected in some of the tropes and tensions of left politics, broadly conceived. Historically, the Canadian social-democratic left has been indifferent at best and hostile at worst to the project and prospect of Québec independence. And while the radical left has been, on the whole, more sympathetic to left nationalism in Québec, dialogue in both cases is impeded by the linguistic divide: there are people on the left in Canada and Québec who literally cannot understand one another.

Even within English Canada, the left is fragmented regionally. In the world’s second-largest country, geography is almost as much an obstacle to communication and unity as ideology. Distances are vast and national face-to-face meetings costly and difficult to arrange. Consequently, there are regional left cultures that often know little about one another. Few people on the left in Nova Scotia are conversant with the composition and activities of the left in British Columbia. The challenges for organizing are enormous.

In addition to the strains attendant on the particularities of Canada as a territorial state are the disputes and divisions more or less common to the left across the global North. There is the conflict, for instance, between an increasingly pallid Third Way social democracy, embodied by the New Democratic Party at the federal and provincial levels, and a small anti-capitalist left that is intellectually vigorous but largely devoid of any political or organizational structure. The type of inclusive party of the contemporary radical left that has been built in Europe, such as Syriza, Die Linke, or Podemos, has yet to emerge in Canada, although Québec has witnessed the birth of Québec Solidaire on the model of the coalition party, replete with organized tendencies.

The left in Canada and Québec is also marked by the tension between the politics of redistribution, at the heart of the traditional left endeavour in both its reformist and radical guises, and the politics of representation, which animates many of today’s progressive movements, from contemporary feminist politics to transgender rights. This disjuncture intersects with a generation gap when it comes to political priorities – particularly within the social movement left and radical left in English Canada – between those who came of age politically before 1980 and those who were politicized after. In the political analysis and practice of the latter cohorts, the structural oppression of marginalized minorities often occupies centre stage, and in particular the issue of structural racism and white privilege. There is a perception, particularly widespread among younger women and activists of colour, that traditional left culture has an unacknowledged, specifically white male bias that creates an inhospitable climate for them. They often see left organizations as environments that reproduce their marginalization, whether it is through ignorance of their issues or neglect of their analysis of those issues; a lack of sensitivity to important differences in collective experience and knowledge; or the resilient belief in class struggle as the primary struggle.

This has proved a challenge for some, rooted in older left traditions, who view the frame of identity as one that elides or downplays class analysis and aligns with liberal-individualist concepts of emancipation. Those who argue for the primacy of class, however, have not always put forward their own productive frameworks for engaging movements organized around race, gender, sexual orientation, and indigeneity, and their lack of sure-footedness in navigating the issues has rendered more traditional left analysis suspect among many young progressives.

If internal divisions were not enough of a challenge to the unity and coherence of progressive forces, a decade of relentless right-wing policy taxed the strength and resources of many left organizations. In the fall of 2015, Canada emerged from ten years of the most reactionary government in the country’s modern history, during which time organized labour, social programs, the legislative protections afforded the environment, the practices of representative democracy, and the right of dissent were all under siege. Even science was a target of repression under the Conservative regime of Prime Minister Stephen Harper. Under these circumstances, the left in all its manifestations has primarily fought a rearguard action to protect past gains from the steady incursions of economic neoliberalism and social conservatism. Notwithstanding the rocky ground, the landscape of the left in Canada and Québec has not been arid, however. A number of notable moments, movements, and even parties of opposition have made their mark. This brief survey offers an aerial view of contemporary left struggles, setbacks, and successes. •

This was published by the Rosa Luxemburg Stiftung.