The Invictus Games, attended by Prince Harry and many celebrities in Toronto last month, overshadowed another big military story: a September 19 report in the Toronto Star that Prime Minister Justin Trudeau has “cracked open the door to joining the U.S. ballistic missile defence program, [and] reversing Canada’s long-standing opposition in the face of North Korea’s new capabilities to strike North America.” 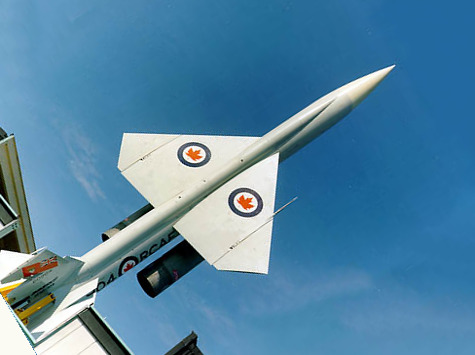 In view of past public opposition to missile defence, the “crack” in the door may just be a feeler to measure public reaction, as the Trudeau government, which has promised additional billions for the military, pursues a “hard power” foreign policy. But the idea of missile defence is deceptive.

Missile defence technology, which emerged after the Korean War, was initially envisioned to intercept intercontinental ballistic missiles (ICBM) carrying nuclear weapons. ICBMs can travel at enormous speeds, so missile defence is most effective if it intercepts missiles just after launch or when they re-enter the atmosphere at lower speed.

In the past, the fear of “mutually assured destruction” (MAD) through a retaliatory attack served as a deterrence. However, eliminating the means for nuclear retaliation through missile defence could actually provide an inducement to attack with nuclear weapons.

Increase the Likelihood of Nuclear War?

Theodore Postol, professor emeritus of science, technology and international security at MIT, says that missile defence increases the likelihood of nuclear war by contributing to the American military’s dangerous belief that a nuclear war is winnable, and that nuclear weapons can be used like conventional weapons.

Scarier still says Postol is that superior U.S. technology in the form of missile defence would force opposing nuclear weapon states to decide within minutes, with insufficient information, whether there are incoming missiles and whether to launch a counterattack.

Under these circumstances there is a high potential for accidental nuclear war, says author Eric Schlosser, who has written about the fragility and illusion of safety in his book Command And Control: Nuclear Weapons, The Damascus Accident, And The Illusion Of Safety.

In the last months of his presidency, Barack Obama refused to take nuclear weapons off hair-trigger alert. This means that within as little as six minutes, Donald Trump can launch a nuclear strike on North Korea, with weapons deployed from submarines surrounding the Korean peninsula.

The threat to use nuclear weapons, as Trump did in his speech at the United Nations recently, is a violation of the Non-Proliferation Treaty, according to the advisory opinion of International Court of Justice. Intercepting missiles in space also violates the Outer Space Treaty, which was ratified 50 years ago to maintain space as a global commons for peaceful purposes.

It is a dangerous time. Canadians must challenge Canada’s willing participation in this madness. •

Last month, the Treaty on the Prohibition of Nuclear Weapons (or the Ban Treaty) opened for signatures to all member states at the United Nations. The treaty is a product of sustained activism by civil society and key non-nuclear weapon states. As researchers who study nuclear policy, we see this development as a landmark in the struggle to eliminate nuclear weapons.

The Ban Treaty would make it illegal for signatories to develop, produce, test, possess, use, threaten to use, or transfer nuclear weapons, among other restrictions. 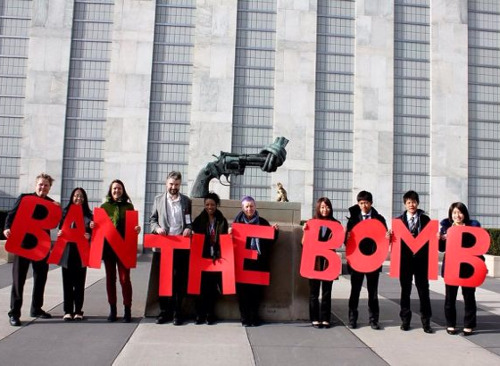 Within days of being opened for signature, 53 countries have signed the treaty, and three have ratified. After signature and ratification by at least 50 countries, it comes into force.

Canada, a historical supporter of nuclear disarmament, has neither signed nor even participated in the negotiations that led to the treaty, which could become the most significant step toward nuclear disarmament since the Nuclear Non Proliferation Treaty (NPT) of 1970.

The Ban Treaty was motivated by a clear recognition that the humanitarian impacts of nuclear weapons use and testing should be at the forefront of all discussions about these weapons. Dr. Tilman Ruff, co-president of International Physicians for the Prevention of Nuclear War testified at the United Nations in March: “An understanding of what nuclear weapons do invalidates all arguments for continued possession of these weapons and requires that they urgently be prohibited and eliminated as the only course of action commensurate with the existential danger they pose.”

The Ban Treaty, therefore, represents a shift in nuclear arms control, away from talking about nuclear weapons in terms of security and deterrence to focusing on the horrendous consequences of nuclear warfare.

This shift is reflected in the language of the Preamble of the Treaty which highlights concerns that the “catastrophic consequences of nuclear weapons” would “transcend national borders” and “pose grave implications for human survival.” The Treaty also posits that “complete” elimination “remains the only way to guarantee that nuclear weapons are never used again under any circumstances.”

An emphasis on the humanitarian consequences, however, is not unique within arms control. Other forms of warfare, such as land mines, biological and chemical weapons, have also been outlawed because of such concerns. And such humanitarian concerns have often guided Canada’s diplomacy in the past, as illustrated by its leading role in the appropriately named Ottawa Convention to ban landmines.

Not in this case. In seeking to justify not attending the negotiations at the United Nations, a spokesperson for Canada’s minister of foreign affairs, Chrystia Freeland, dismissed the Nuclear Ban Treaty as “certain to be ineffective” because of a lack of participation by nuclear weapon states.

Even in the case of the Ottawa Treaty, many countries that deployed landmines, such as the United States, declined to sign onto it in 1997. Yet, the treaty did affect policies in countries beyond those that signed it.

In 2014, the United States stopped using landmines, except in the Korean Peninsula. Treaty negotiations do in fact shift global norms and impact military plans, even if they may not be legally enforceable in countries that are non-signatories.

Multilateral treaties can serve to unify the international community against those who use them. Chemical weapons use in Syria “triggered an unprecedented international response” and “led to the creation of an ambitious plan to eliminate Syria’s chemical weapons program and prevent future use or proliferation of these abhorrent weapons,” as the Global Affairs Canada website on chemical weapons policy explains.

Without a treaty in place, such a concerted global effort would be much harder to mount.

Rather than involve itself with the Ban Treaty, Canada has emphasized the so-called step-by-step process for nuclear disarmament. The Global Affairs Canada website on nuclear weapons policy offers “NPT universalization, entry into force of the Comprehensive Nuclear-Test-Ban Treaty (CTBT) and negotiations on a Fissile Material Cut-off Treaty (FMCT)” as “more practical and realistic options to pursue in the short and medium term.”

Characterizing these as practical and realistic is misleading. The CTBT was negotiated in 1996 and has still not come into force, largely as a result of opposition within the U.S. Congress. The Fissile Material Cut-off Treaty, or FMCT process, has been stalled as well — the last time it gained momentum was in 1995 with the establishment of the mandate under Canadian Ambassador Gerald Shannon.

That did not lead to actual negotiations — which still have not begun. The step-by-step process isn’t going anywhere anytime soon.

Furthermore, arguments about what is more practical and realistic only distract from potential action. Nothing prevents Canada or any other country without nuclear weapons from pursuing both traditional arms control measures like the FMCT and engaging with the Ban Treaty. The latter is sure to open up several options to further nuclear disarmament.

Constructive participation in the evolving effort to prohibit nuclear weapons, regardless of whether Canada signs the Ban Treaty or not, is the only way to explore this space and identify fruitful next steps.

Looking Ahead on Nuclear Disarmament

There has been widespread political support within Canada for being more active in furthering nuclear disarmament. In 2010, both the Senate and House of Commons unanimously adopted a resolution encouraging the Government of Canada “to engage in negotiations for a nuclear weapons convention” and “deploy a major worldwide Canadian diplomatic initiative in support of preventing nuclear proliferation and increasing the rate of nuclear disarmament.” The dynamic set off by the Ban Treaty offers a suitable opening for launching such an initiative.

In April of this year, Chrystia Freeland issued the following statement to mark the 20th anniversary of the entry into force of the Chemical Weapons Convention: “Twenty years ago today, the international community was united in denouncing the use of chemical weapons by anyone, anywhere, under any circumstance.”

Isn’t it time for the same to be said about nuclear weapons?

This article originally appeared on TheConversation.com.