The composition of the labour movement has fundamentally changed over the last twenty years. This article reviews the dramatic changes in public and private sector unionization and some surprising differences that have emerged between Ontario and the rest of Canada. Potential for growth is possible, even in the public sector.

Ontario has 1.3 million public sector workers and currently 943,000 of them are covered by a union. That means that 72.2% of public sector employees have union coverage. 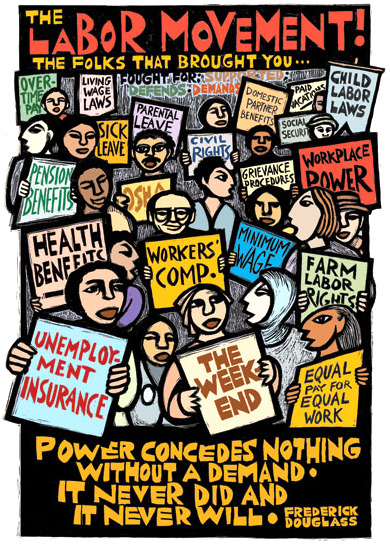 How to Increase Union Density

As far as the public sector is concerned there are two basic ways to increase unionization.

If Ontario had a similar level of public sector employment as the rest of Canada (10.56% of population instead of 9.41%) we would have another 160,800 public sector workers and this would add (at the current 72.2% union density in Ontario) 116,100 more unionized public sector jobs.

If the manufacturing sector had maintained the 34.5% unionization level that it had in 1997, there would be another 100,000 unionized workers in Ontario. As manufacture has been the core of the labour movement in Ontario, this decline is, of course, a very serious change negatively affecting the bargaining power of all workers – public and private, union and non-union alike. More positively, there is clearly room to grow the labour movement in manufacturing.

More success has been achieved in the construction sector. Unionized construction workers are now almost as numerous as unionized manufacturing workers, having almost doubled their numbers since 1997. Employment in construction has increased significantly and the unions have kept up with the growth by keeping the rate of unionization steady (unlike most other private sector industries which saw a decline in the rate of unionization since 1997). Employment in “business, building and other services” has also grown quickly and the density of unionization in that sector has also increased – but it still remains at only 13.6%.

Charts outlining the unionization trends in various Ontario industries are below. The numbers (drawn from Statistics Canada CANSIM 282-0078) can be accessed by clicking here. • 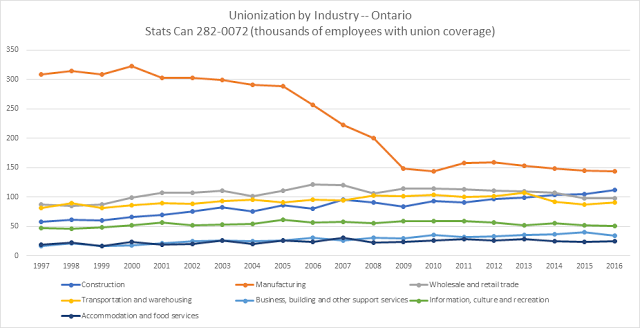 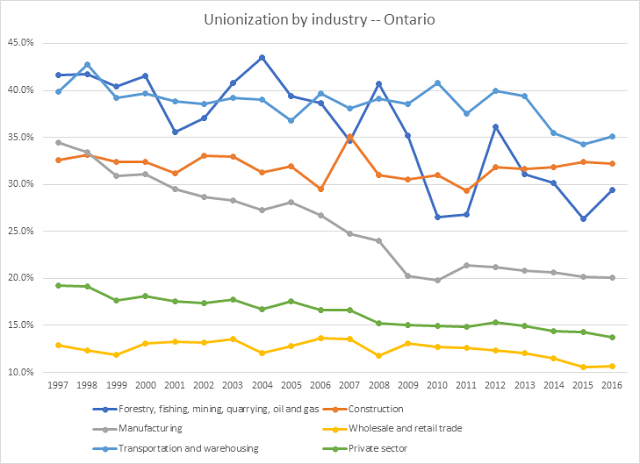 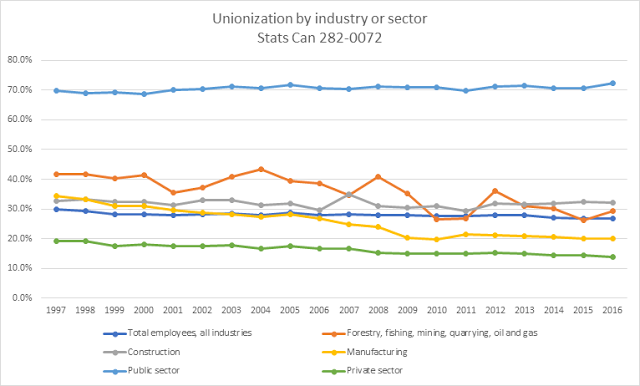