Both the Liberal government and its Advisory Council on Economic Growth are head-over-heels for the Canada Infrastructure Bank (CIB), announcing with fresh-faced enthusiasm that it will be an innovative route for augmenting infrastructure finance, a flywheel of institutional capital participation, and an economic stimulus boon for the middle class. Beyond the euphoria is deception; there are no sunny ways to be found here, only shadowy figures and cloudy rationale. Let’s decipher the fraudulent hype. 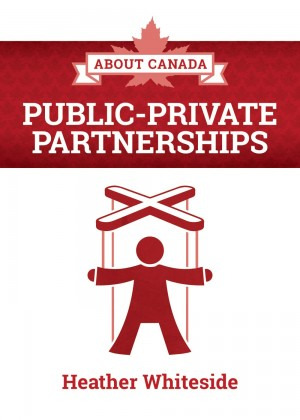 Innovative? Canada’s current system of dysfunctional public infrastructure development would certainly benefit from a source of dedicated, pooled national savings. Yet the CIB’s main ‘innovation’ lies in granting equity ownership rights to private capital through investment vehicles like public-private partnerships (P3s), the self-same model tagged with adding $8-billion unnecessary dollars to Ontario’s long run debt, or where borrowing through partnerships is doubling long run costs for BC taxpayers. Not only is that theft, it is deception. We have seen this innovative movie before, many times over. Canada imported the scheme decades ago from the UK where the much loathed and floundering Private Finance Initiative was masterfully rebranded by Tony Blair by turning privatization into partnerships that augment, rather than replace, public spending. Fast forward a few decades and many there are calling for a complete abandonment of the bankrupt partnership model – a model as bankrupt as their NHS Trusts teetering on the edge of insolvency, saddled by private partners’ exorbitant fees.

A Flywheel for Investment?

For mechanics, a flywheel is a store of energy and a momentum-enabling device. For Canadians, the CIB will be a bargain store offering up revenue streams and guaranteed returns, a veritable game show wheel of asset grabs and giveaways. Once established, secondary market equity sales can bring in up to 50 per cent returns on investment for private owners. Canada has already been host to over twenty such equity sales, and nearly half were captured by tax haven-registered investment funds. A shell game is at play: whether financed publicly or privately, more money spent on public works between 2017 and 2028 means someone’s repayment burden is going up, either taxpayers’ or service users’. Ultimately the public pays, and payments frequently fly offshore cancelling revenue recycling at home.

A boon for the middle class? Smoke and mirrors. Focusing attention on the broad benefits of infrastructure-led economic stimulus diverts scrutiny from the guaranteed windfall profits that await investors. Their investment in our stimulus comes at a price – a 7-9% return at the very least – and their equity means changing how public infrastructure is designed and repaid. The CIB will target ‘commercializable’, revenue-generating infrastructure like transit, highways, and bridges promising dedicated user fees to repay private capital. The middle class must decide quickly if a Canadian landscape dotted with tolls and charges matches its needs and wants because the Liberals pledge to increase total infrastructure spending through this innovation, and they plan to reach deep into municipal-provincial jurisdiction to do so.

Cutting through the deception means seeing the Canada Infrastructure Bank for what it is: the long run theft of public dollars. Historically low interest rates make for less profitable investments, and with unhappy investors on a hunt for yield, our public infrastructure will soon be on offer. Yet low interest rates equally make for happy borrowers. The government’s own 2015 budget trumpets the lowest net debt-to-GDP ratio in the G-7. While we shouldn’t be foolish with excessive debt run up, we also shouldn’t be fooled into buying what investors are selling. •

Heather Whiteside is Associate Professor of Political Science at the University of Waterloo and Fellow at the Balsillie School of International Affairs. She is the author of About Canada: Public-Private Partnerships.