I join with many others who stand for a world of peace and justice in completely repudiating the terrorist attacks in Paris and the similar atrocity in Beirut. We express our full solidarity with the hundreds of innocent victims, dead and injured, many of whom remain in critical condition at this time.

That said, the terror attacks must be seen in a wider context. 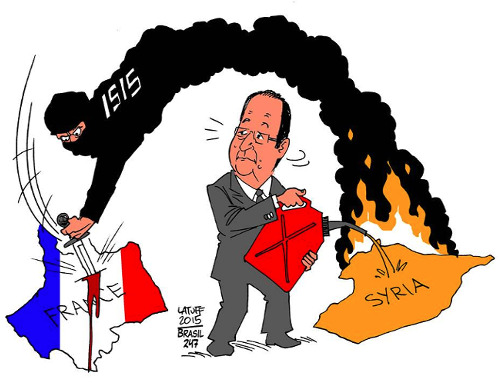 We live in a world of massive inequality and environmental degradation, one dominated by the global 1% and the states that act in their interests. To maintain their power, in recent decades the U.S. and its allies have engaged in a seemingly endless series of imperialist interventions across the globe, unequal wars that have killed hundreds of thousands of innocent civilians, destroyed societies, created profound animosities between communities, and forced millions of people to flee their homes to seek safety in bleak refugee camps or risk death on land and sea. Our condemnation of the crimes committed in Paris and Beirut must not blind us to the crimes of imperialism, many orders of magnitude larger, and which create the conditions that have led some to turn to terrorism.

That is why I refuse to stand with Barack Obama, Justin Trudeau or François Holland when they condemn the attacks in Paris. Obama and Hollande have too much blood on their hands. Their statements are hypocritical, designed to promote more repression, war and violence.
Trudeau has just assumed office, but the record of his party in office and his election program indicate that his foreign policy will not differ from that of Stephen Harper in any substantial way.1 It is apparent that the leaders of the G20 who met in Turkey on November 15-16 have made plans to take maximum political advantage of the opportunity that the killings in Paris afford them.

One day before the attack in Paris, two suicide bombs exploded on a busy street in Beirut, killing 43 bystanders and injuring many more. The attack, which was directed against supporters of Hezbollah, received only perfunctory attention from Western leaders or the Western press.2 This illustrates that the reaction of the self-proclaimed leaders of ‘the civilized world’ to acts of violence (other than their own) is highly selective, as they shape their response to serve their larger aims. It also demonstrates that a life lost in the Middle East matters less to them than a life lost in New York or Paris.

For those of us committed to the struggle for a world of peace and social justice, it is important to reflect on the lessons of 9/11. The path of restrictions on democratic freedoms in the name of “national security” is a fraud and a dead end. Casting suspicion on ‘others’
in our midst who are not like ‘us’ and heightening police surveillance of them – in this case, Muslims – promotes racism and Islamophobia and weakens us all. Participation in imperialist wars – such as Canada’s lengthy commitment to the U.S.-led war in Afghanistan, which left the country in ruins – must be vigorously opposed. (The previous Liberal government, under Jean Chrétien, took the decision to go to war.)

In this situation, it becomes particularly important to demand of Justin Trudeau that he:

Art Young is a long-time socialist and solidarity activist who lives in Toronto, Canada.

Their Wars, Our Dead Bodies:

The following is a translation of a statement issued by the New Anticapitalist Party (NPA) one day after the terrorist attacks in Paris. The NPA is part of the far left in France.

The statement was issued in French under the above heading. The NPA also published an English version on its website. I have edited the translation and corrected it in a few places to better correspond with the French text.

At one point the NPA statement refers to “Islamist” barbarity. It is worth noting, however, that many of the organizations fighting the regime of Syrian President Bashar al-Assad have strongly repudiated the attacks in Paris. Forty-nine of them, including some of the most prominent ones, quickly published a joint online statement which said, in part,

“Rebel factions in Syria strongly condemn these criminal acts, which violate all divine laws and human values, and consider this act of terror no different than the terror the Syrian people have been suffering from on a daily basis for almost five years – both stem from the same root: the Assad regime and its instrument ISIS.”4

The horrible attacks which took place in Paris on Friday evening, killing more than 120 people and wounding dozens more, this blind violence, provokes revolt and indignation. The NPA shares these sentiments and expresses its solidarity with the victims and their friends and relatives. This tragedy is even worse in that it has befallen innocent victims. The murderous attacks were aimed at the general population. 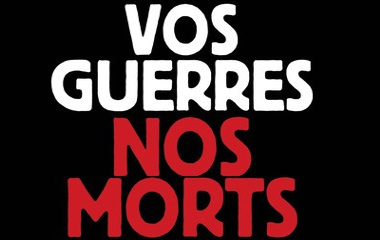 This contemptible barbarity in the heart of Paris is a response to the equally blind and even more deadly violence of the bombings perpetrated by French warplanes in Syria following the decisions of [French President] François Hollande and his government.

These strikes are supposed to be against the Islamic State, the terrorist jihadists. But in fact, together with the Russian intervention and bombings in Syria, they serve to protect the regime of the main person responsible for the martyrdom of the Syrian people, the dictator [President Bashar al-] Assad.

And there too civilians are the principal victims, condemned to survive under terror or to flee at the risk of their lives.

In a pitiful intervention, Holland broke down before the cameras and stammered some words about the Republic. He, who is quick to launch new wars, and carries an enormous responsibility for this new tragedy, now asks for our ‘trust’. He has declared a state of emergency throughout France, considering that it is necessary to respond by trampling on basic freedoms. [Former president Nicolas] Sarkozy has quickly supported him. Thus, from now on, the political authorities have the power to ban public meetings and control the press.

Once again, those responsible for this surge of barbaric violence appeal for national unity. They are trying to take advantage of this dramatic situation in order to choke off indignation and revolt. For this they have a ready-made scapegoat, Muslims. We reject any national unity with those responsible for wars, the bourgeoisie, Hollande, Sarkozy and [leader of the far-right National Front, Marine] Le Pen. We denounce the racism that the state disseminates in the name of so-called “republican values” at the very same time that it threatens democratic rights in the guise of fighting terrorism. We demand that the state of emergency be lifted.

The only response to wars and terrorism is for workers and people to unite, irrespective of their origins, their skin colour, their religions, across borders, struggling together against those who are trying to silence them, to dominate them, and to finally put an end to this capitalist system which is the source of barbarity.

To end terrorism, we must end the imperialist wars whose purpose is to continue the plunder of the wealth of the people who live under the domination of the multinationals. We must force the withdrawal of French troops from all countries in which they are present, in particular in Syria, in Iraq, and in Africa. •

Art Young is a long-time socialist and solidarity activist who lives in Toronto, Canada.