Our goal is to formulate ten theses on what we believe constitutes the historical background of the Syrian refugee crisis within the context of the Arab Spring. One central argument is that Western meddling in this process was turned into a violent contest for state power that has resulted in grave human tragedy. The recent Paris attacks with over 100 fatalities – resulting in a state-of-emergency declaration and arson of refugee camps in retaliation – indicate that the Syrian refugee crisis has already taken on a greater importance for global politics. 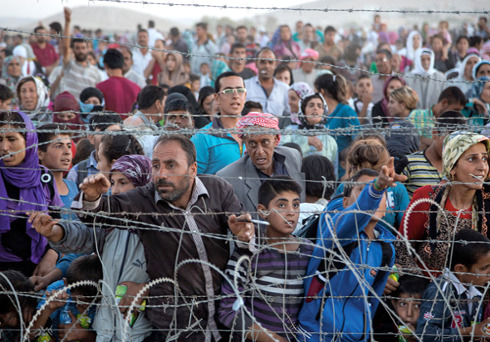 1. The Arab Spring was initially a hopeful phenomenon of social mobilization against authoritarian regimes. It started in December 2010 in Tunisia, with mobilized working class and civic organizations after the self-immolation of a street vendor repressed by police forces. Social mobilization became so vigorous that the president had to resign after three weeks.

2. Similar mobilizations began to take place in several Middle Eastern and North African countries including Egypt, Libya and Syria, but in each of these nations the degree of civil-society organization was different and the extent of meddling by Western powers also varied considerably.

3. In Egypt the most mobilized sectors of civil society were not the most organized. The Muslim Brotherhood, a latecomer into the protests, capitalized the process that ultimately resulted in the downfall of Hosni Mubarak. The military was a very strong institution with deep-seated economic interests. Mubarak became a sacrificial lamb in lieu of pacification. A negotiated transition to electoral democracy led not to the triumph of the mobilized liberal and socialist elements in civil society but, to electing the Muslim Brotherhood’s candidate. Coupled with serious economic adversities, Mohamed Morsi‘s presidency aroused widespread controversies on the Islamization of society, and was met with mass protests attended by millions. Eventually, the Muslim Brotherhood experience ended in tragedy, as the military decided to stop the Islamist impositions by his administration in just over a year. With considerable popular support, the July 2013 coup d’état restored military rule, albeit with more authoritarian undertones than even during Mubarak’s time. Geopolitically, the new regime seems to pursue balance between Russia and the United States. Despite its friendly relationships with Russia, Egypt’s military involvement beside the Saudis in Yemen would certainly contribute to the further destabilization of the region.

4. Libya’s case was very different immediately after the first social protests and mobilizations: elements from Muammar Gaddafi‘s army presumably joined the protests, which became an excuse for his regime to respond with violent repression. Western powers then became heavily involved through a “no fly zone” ultimately resulting in the killing of Gaddafi. Western-supported mercenaries were involved and eventually transferred to Syria. There were no significant groups organized in civil society, with much of its rural population structured along tribal lines. The 2012 radical-Islamist attack on the U.S. Consulate and CIA operators in Benghazi set off the civil war in which Libya continues to be mired, with tens of thousands of casualties.

5. Other Arab countries saw uprisings that were repressed quickly. But Syria’s uprising turned into a violent civil war since 2011, which was indeed facilitated by the authoritarian nature of the Syrian state. More complex and capitalistically developed than Libya, Syria has international allegiances with Iran, Russia and China. The persistence of Syria’s allies has prevented an all-out intervention by Western powers led by the United States, the United Kingdom and France. Their intervention has been by proxy, by supporting supposedly “moderate” opponents of the Bashar al-Assad regime. But non-Syrian radical Islamists who have become bolder since the U.S. invasion of and war against Iraq have become a nearly dominant presence in Syria. Many of their leaders also fought in Libya. The Western-supported proxy war was met with the military involvement of Iran and Russia, at the request of the Assad regime, which further escalated the conflict situation. The ultimate three-way stalemate after four and a half years of civil war has caused the displacement of about 11 million Syrians, both internally and internationally, representing more than half the total population. About 250,000 have lost their lives.

6. Had there been no Western intervention in Syria, there would be no refugee crisis in 2015. Indeed, Turkey’s active involvement should not be underestimated. Consequently, over four million Syrians have left their country since 2012. Most have taken refuge in the surrounding countries, namely Turkey, Lebanon and Jordan. But a growing number are moving on to the European Union. How to deal with this exceptionally large number of refugees has divided governments and people in the European Union. The overt discussion is framed in terms of refugees and a humanitarian response, as if the human exodus were a problem in itself. Ultimately, however, this discussion roughly replicates traditional debates about migrants in general.

7. One question being raised is whether Syrian and other migrants are economic migrants or political refugees. The underlying assumption of this question is that political refugees are more deserving of asylum than economic migrants. But the fact is that all migrants that choose to leave their countries do so because their livelihoods are at stake. Granted, there are differing degrees of urgency, but how are destination countries to judge such nuance in an emergency? One of the Harper administration’s questions was, for instance, whether the Syrian refugees owned a business prior to fleeing – this would make them more deserving in Canada: not a humanitarian but clearly a utilitarian criterion.

8. Two broad strands of interpretation in migration debates in advanced capitalist countries regard whether the effects of migrants focus on the countries of destination, or on sending countries, usually from developing societies. Countries of destination usually have a negative rate of natural population growth (i.e, less births than deaths), so they require new immigrants to sustain economic growth. But how to manage migration?

9. The liberal position welcomes migrants as they are expected to add to the labour force and cheapen the cost of labour. The nativist or xenophobic position opposes new immigrants, as is currently the case with Hungary and Poland, for example, in the European Union. More to the left of the political spectrum, migrants are welcome as long as they are guaranteed to enjoy the same labour rights as the rest of the labour force in the receiving nation. For the countries of origin, those sending the migrants, the challenge becomes that the basis for their sustainable development are being drained by out-migration of the young, better-educated and most entrepreneurial members of their societies.

10. In response to the Syrian crisis, the Canadian public opinion has been bombarded with a plethora of messages that encouraged donations and sponsorship for Syrian refugees. Such charity-centred and individualist solutions help nothing but distract the public opinion from the root causes of the problem, i.e. the U.S. unilateral interventionism. In the final analysis, the refugee crisis is merely the symptom of the real problem: the U.S. adventure to impose “democracy” in the Middle East and North Africa since 2003, with no regard for respecting national sovereignty. This is not only a contradiction in terms but also a tragic political, geopolitical and humanitarian failure. Beyond charity-centred and individualist solutions, the Canadian civil society needs to be mobilized to call for Syria’s sovereignty as well as the USA and Canada’s cooperation with Russia, as proposed by former Prime Minister Jean Chretien on 1 October 2015, as reported in the Globe and Mail. This would also benefit global peace and stability by reasserting the multipolar structure of the world. Three appropriate slogans are: Respect Syria’s sovereignty, Respect multipolarity, Ask for Global Cooperation not a new cold war with Russia. •

These theses were originally presented at a panel discussion on the Middle East and the crisis in SFU’s School for International Studies.

Gerardo Otero is Professor of International Studies and Sociology at Simon Fraser University.

Efe Can Gürcan is an instructor and Ph.D. candidate in sociology at Simon Fraser University.