The debate over Syria on the Left is toxic. I pulled together 13 points about the situation in Syria I hope can be useful in framing the discussion in a more productive way. The ultimate goal of these discussions in Western countries should be to have a clearer idea about how to strengthen antiwar movements to stop the madness of imperialism.

1. A political assessment of the 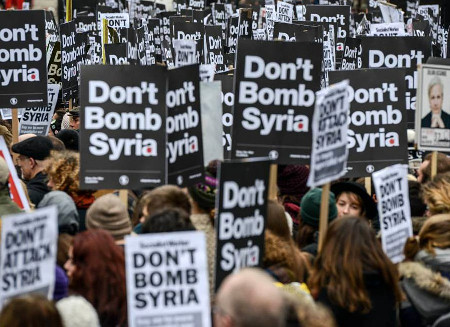 conflict should be rooted in a deep concern for human life. It is horrific to watch what is happening in Syria and in the wider region. War brings suffering and those that suffer the most are everyday working-class people.

2. The Syrian Civil War emerges from the Arab popular revolts that spread throughout the region in 2011. The protests against Bashar al-Assad had both economic and democratic demands. As the protest movement evolved and spread it developed organs of political expression and governance, such as democratic councils or Local Coordination Committees (LCC). In Rojava, the popular uprising in the rest of the country allowed the Kurdish Democratic Union Party to establish an autonomous self-governing region.

3. The turn to armed struggle was a product of the regime’s strategy to smash the movement by force. It weakened rather than strengthened the forces of the popular revolt. As Ghayath Naisse, a member of the Revolutionary Left Current (RLC), explained, in the first year of the popular uprising, the LCCs lost three successive generations of leadership to Assad’s violence.

4. There can be no denying that Assad and his allies have committed atrocities. This should come as no surprise as his regime has frequently used brutal methods to crush political dissent in the past. For example, in 1982 the regime levelled large sections of Hama in order to defeat an uprising led by the Muslim Brotherhood, killing an estimated 10,000 people in the process. Assad and his father’s regime have used torture. Remember how Western security agencies outsourced Maher Arar’s torture to the Syrian regime.

The reality of the conflict is brutal. You simply cannot use artillery and drop bombs in dense urban areas without inflicting a large amount of civilian casualties.

6. The brutality of the war and the numerous interventions creates its own logic in the armed struggle. Reactionary factions in the anti-Assad camp have grown in prominence through the armed struggle, as they had easier access to arms, money and training from foreign governments. The rebel factions have also committed atrocities.

7. It is wrong to talk of a unified rebel side. There are numerous factions that have been labelled as rebels. These groups can be broken down into dozens of fronts that operate as fluid coalitions. For instance the Free Syrian Army was at one point a coherent armed force, now it is generally referred to a broad spectrum of different and sometimes competing armed groups such as the Southern Front and the Army of Conquest (the FSA has as many as 27 different factions associated with it). A long list of other factions, some secular and many Islamist, have formed into dozens of fronts in various regions throughout the country. One of the best organized forces on the rebel side is the former Al-Qaeda group Jabhat Fateh al-Sham.

8. The conflict must also be put into a wider historical and regional context. The rise of ISIS was a product of the invasion and occupation of Iraq and the chaos and sectarian conflict that it both caused and deliberately fomented. ISIS now controls parts of western Iraq and eastern Syria and is formally opposed to all sides in the Syrian conflict, though in reality it is supported or tolerated by various different regional actors.

9. Strange bedfellows abound in protracted conflicts involving so many forces. For instance, the YPG, the armed Kurdish group, has been fighting in coordination with Assad’s group against other rebel groups and actually took part in the fighting to recapture East Aleppo. Turkey supports various rebel groups against the Kurds and the regime, even though the United States, its ally has supported various rebel factions, the YPG and Turkey.

10. Each side and their foreign backers have been pumping unceasing amount of propaganda which makes it very hard to discern the truth of claims and counter claims. The reporting on the ground has been spotty at best – in part this is the result of the killing of a number of journalists in the first couple of years of the conflict.

11. The Left has not fully grappled with phenomenon of social media in relation to this story. The instant hot takes and analysis is often based on partial or totally misleading stories. The promise of social media, its potential to bypass the corporate media and elevate the voices of regular people, has failed to materialize. Rather social media as a medium has been effectively incorporated into the propaganda system which is still owned and operated by the corporate media, state-owned media, and the PR strategies of governments.

Instead of analysis being driven by sober reflection and diligent research, it has come to reflect the churning outrage of the medium itself. This is not to say people shouldn’t be outraged, but the Left should be trying to offer useful and critical analysis. We should insist on the best facts possible and resist the urge to amplify the hyperbole. This means putting existing media narratives into a wider context.

12. We should insist on linking the Syrian conflict to the broader conflict in the region. This means looking at what is happening in Yemen and Mosul and asking why some victims matter to our politicians and media, but other victims don’t. This should not be done in a cynical manner, to divert attention from actual crimes, but rather to illuminate wider truths in the region and conflict.

13. The debate about strategy is being carried on in the abstract. If people in the UK, U.S., Australia and Canada want to protest Russian embassies they should do that (for the record I think this is a strategic mistake). But critics who aren’t building antiwar movements or organizing protests should stop demanding that others do what they haven’t.

The antiwar movement in the West faces numerous challenges: the rising right represented by Trump and the European far-right, increasing xenophobia and Islamophobia, increased terrorist attacks, the refugee crisis, and the expansion of unending wars in the Middle East. Framing these questions around abstract debates about how some on the Left orient to Russia actually hinders the growth of antiwar movements and sentiments. Opposing Russian aggression above and beyond one’s own government is a strategic dead end for the antiwar movement, especially in the context of rising nationalism and anti-Russian rhetoric pumped out by the media and politicians.

We should ask ourselves why the UK is the only Western country with a broad and active antiwar movement? The reason is because they have united around stopping their own country’s drive to war. Critiques of existing antiwar groups like Stop the War coalition have not offered up any actual strategic alternative other than some version of No Fly Zones, which in reality are only further acts of war, or increasing military aid into the region, which could only escalate the conflict.

“All imperial powers out of the region” is the correct position. Applying that in the concrete means stopping your own government’s interventions and supporting refugees, which is crystallized in the slogan “Troops out and Refugees in!”

Those of us in countries like Canada, UK and the U.S. need to strongly oppose the brutal war in Yemen and the siege of civilians in Mosul and any and all intervention in Syria. We need to understand that solidarity with the people of Syria, Iraq and the entire region begins with us actually stopping the reflexive reaction to intervene in countries we don’t live in. •