Following his election as President of Unifor, Jerry Dias, rallying the troops, argued: “Unifor is here because it’s time to stop playing defence and start playing offence. It’s time to stop reacting and time to start acting. It’s time to set the agenda . . . We have to show our collective power.” 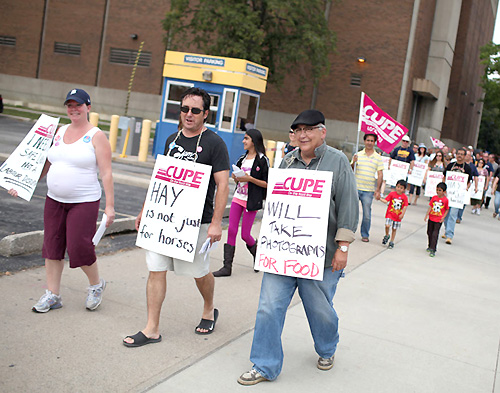 Let us hope the troops have been rallied, because the time for offence has arrived. On September 8th, CUPE Local 1393 representing 282 technical staff at the University of Windsor was forced to take strike action. The walkout comes after months of fruitless negotiations. Management, which has already contracted out some custodial work and is trying to open the door widely for more, is seeking major concessions which would: give them more or less arbitrary authority over job classification and evaluation, undermine members’ bumping rights and pay equity provisions, and make lay offs, contracting out, and casualization of positions easier. While the decision to strike was purely defensive – brothers and sisters are simply trying to protect their existing rights, even turning down the offer of a small wage increase because it was tied to major job security concessions – winning is going to require offence.

This strike is not just about 282 technicians and it is not just between CUPE 1393 and management at the University of Windsor. It is about standing up and stopping – here, now – the decades long but intensifying since 2008 assault on public institutions. Which means as well – stopping the decades long but intensifying destruction of the value of democratic social organization represented by public institutions.

The principle of capitalism: the owner of capital exploits labour (paying it less than the money-value it creates) and appropriates the surplus as private property.

In capitalist societies, public institutions are always under threat, because funding them requires the tax-based re-channeling of socially created wealth away from the private and exclusive accumulation of money-value to purposes of shared life-requirement satisfaction. A society which commits to funding public institutions thus must come into conflict with the principle of capitalism, even if to only a very limited extent. Public sector workers are therefore always seen as particularly pernicious to capitalist ideologues, since their existence is a result of successful democratic re-channeling of money-value that could otherwise have been privately appropriated.

Hence, one must expect and be prepared to counter the obloquies that will be directed against the strikers.

One way of thinking about the neoliberal phase of capitalist social organization (1973 onward) is as an organized, global attempt of capital owners to re-capture money-value ‘lost’ to public institutions over decades of successful union and community based democratic political organization and struggle. The strategy by which this ‘lost’ money-value is to be recaptured is the same across the capitalist world: First, cut corporate and income taxes for the best off and replace them with regressive consumption taxes that do not return the same revenues. Once taxes have been reduced and income redistributed upwards to private hands, claim that society can no longer “afford” to fund public institutions. Now, begin to starve them of funds, blaming “greedy” public sector workers for the ensuing crises of public services. Install management teams that ape private sector corporate practices to further weaken and undermine public sector unions, outsource and casualize as much work as possible, cut wages and benefits, increase instability in peoples’ lives and weaken their sense of security, making them more liable to accept the attacks and make the concessions. Enable as far as possible the colonization of the public sector by the private, weakening and finally destroying altogether the commitment to the democratic principle embodied by public institutions. Undermine their capacity to satisfy the life-requirements they have been designed to satisfy, make them vectors for the return of money to private hands. Distract attention from the ensuing decline of quality of life by obsessive-compulsive repetition of mantras of increased ‘competitiveness,’ ‘economic growth,’ and ‘ensuring opportunities for the next generation.’

“But beyond your individual life-horizons (which are of course essential) it is not in your interest as a member of a still nominally democratic society, i.e., one in which we are supposed to make decisions about matters that affect us all together – to allow the further destructive, undemocratic neoliberal agenda to advance further.”

The reality, of course, is that as secure and meaningful jobs increasingly disappear, (jobs such as are represented by CUPE 1393) the next generation finds fewer and fewer opportunities to contribute their productive and creative capacities in meaningful and enjoyable ways to their communities and the wider world. So if you are a student at the University of Windsor, try to see past the short-term disruption to the longer-term consequences if management – not only here, but across the country, in all economic sectors – continues to win concessions. At some point, no matter what you choose to pursue as a career, your prospects for success will narrow. But beyond your individual life-horizons (which are of course essential) it is not in your interest as a member of a still nominally democratic society, i.e., one in which we are supposed to make decisions about matters that affect us all together – to allow the further destructive, undemocratic neoliberal agenda to advance further. All of us must therefore strive to make this strike about that agenda; the problem is not simply the university management, it is the business class and their political servants who have been prosecuting this agenda for decades.

In order to put the neoliberal agenda on the run, the labour movement needs to get involved, getting out to bolster the picket lines when called upon by the local. As importantly, it means standing up to critics of the strike and saying: workers should not have to apologize or feel guilty about demanding job security. It means exposing the absurdity of a form of social organization which forces people to pay for the resources their lives require, treats having a job as a moral imperative, and consistently demonizes workers for trying to protect their jobs! It is time for everyone to understand that the on-going loss of well-paying manufacturing work and professional jobs is not the result of natural-evolutionary forces, but policy decisions that can be challenged and reversed. It is also time to dispel the illusion that one group of workers taking less frees up investment funds to create employment elsewhere. It frees up money to be privately appropriated and invested for the highest return, wherever that return might be – the stock market or real estate in Dubai. Reasonable wages and salaries for workers, by contrast, are spent where people live.

The foregoing argument does not assume or entail that budgets – institutional or provincial – are unlimited. All budgets are finite and in the short term time frames in which collective bargaining functions trade offs have to be made. Unions have not been the party making ‘unreasonable’ demands for many, many years. Public sector workers are painfully aware that the institutions their work sustains are particularly subject to damaging budgetary pressure because their funding is tied to political forces not under their control. These are all reasons why this strike involves the interests of everyone who has a stake in quality public institutions and the democratic principle that underlies them.

Winning this strike does not simply mean successfully resisting the concessions being demanded, it also means building the foundations for a new political movement motivated by the democratic vision of a society that uses its resources to ensure the satisfaction of its members’ natural and social life-requirements, whose institutions are governed by collective efforts of those whose lives they shape and enable, which solves collective problems cooperatively, and which organizes its economy so as to ensure that all with something to contribute find the space in which to contribute. •

This article first appeared at www.jeffnoonan.org.