With more than 16,000 votes (a whopping 28 per cent of the vote), the campaign of Socialist Alternative’s Kshama Sawant in Washington’s 43rd legislative district is a bright beacon of hope on the otherwise bleak horizon of the 2012 election for the American left, although you wouldn’t know it by reading the party-line and left-liberal news outlets. Both focus on praising/blasting the two major parties and take solace in a handful of progressive initiatives that passed in a few states while occasionally mourning the poor performance of third parties nationally. 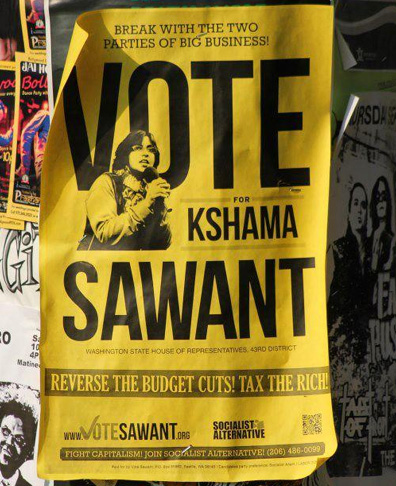 The first presidential election since Occupy brings with it a few lessons that the left should take to heart concerning the long haul, short-term strategy, and sectarianism/left unity. Every experience, no matter how depressing, traumatic, or distasteful is an opportunity to learn and grow, and 2012 is no exception.

The failure of voting for the Great Evil as a strategy to arrest Evil’s victorious march over the past 10 election cycles does not need to be reiterated here. Rest assured, President Barack Obama will show his true colors soon when his tax cuts for the 1 per cent expire again (they stopped being Bush’s tax cuts the moment Obama chose to extend them), giving him the opportunity to attempt a second drone strike on Social Security and/or other “entitlements” under the heady guise of a “Grand Bargain” (“kill list” would be more accurate). I can already hear liberals squirming, moaning, and making excuses for Obama’s Faustian bargain, just as they did when Bill Clinton razed the first rampart of the New Deal to the ground in 1996 when he ended welfare. Some things never change, no matter how long your long view is.

Voters who decided to reject seppuku as a lesser evil to beheading are understandably demoralized at the turnout for Jill Stein, the 2012 Green Party candidate, who came up far short of the 5 per cent needed to secure $20-million in federal matching funds for 2016.

A political machine that consistently gives parties of the 1% 99 per cent of the vote and a party of the 99% 1 per cent of the vote, without producing revolution, is an instrument unmatched anywhere in the world for maintaining the status quo. Until the left finds a way to break up, undermine, and successfully sabotage this machine, 1% rule in the United States will forever remain secure. This setup weathered the storms of the 1930s and the 1960s and emerged from both periods largely unscathed, with 1% rule firmly intact. Now that unions are on the endangered species list, our generation has been left with no institutional legacy or defensive position from which to successfully resist naked market forces and unchecked state power.

Jill Stein and the Green Party

What does that have to do with Stein’s showing? She was up against this machine with little to no social/political forces behind her and almost zero name recognition of her own on a national scale. The Green Party’s support doubled compared to 2008 with Nader’s absence from the race, the activist resurgence sparked by Occupy, and Hurricane Sandy’s reminder that climate change is a serious problem, but doubling from 0.12% of the vote to 0.3% is a far cry from the 5.0 per cent necessary to really begin to make a dent in the national political machine.

The point here about the long haul is that it was totally unrealistic to expect Stein to do better than she did in the face of all of the above factors given that this was her first time on the national political stage. She was arrested repeatedly during the campaign and did not yield or bend a centimeter in the face of liberal hysteria about “the lesser evil.” In other words, she means business.

The Green Party has come a long way from 2004 when David Cobb exploited the party’s undemocratic voting system to block the party’s popular choice (Nader/Camejo) from being nominated, a mistake Cobb himself came to regret. This time, there was no question of the Greens endorsing Obama and they managed to qualify for some federal matching funds in 2012 and got on the ballot in 43 states. This recovery after their near-death experience in 2004 was the result of a lot of thankless and hard work by Green Party cadres. 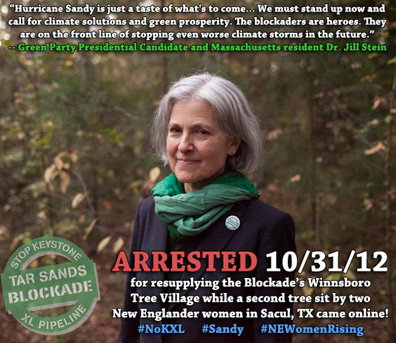 However, hard work should not blind us to the sobering reality that the left-of-Democrat vote all but disappeared nationally in 2012 without Nader on the ballot. This is an indication of just how divided, weak, and unpopular the post-Nader American left is. A left presidential candidate to reaching the vaunted 5 per cent popular vote threshold in 2016 or 2020 remains almost a pipe dream, given the current constellation of left forces that are badly divided, struggle hard just to survive, and survive to compete with rather than collaborate with one other. There is no excuse for the Green Party, the Peace and Freedom Party, the Justice Party, the Socialist Party, the Socialist Workers’ Party, and the Party for Socialism and Liberation to fight over “their” sliver of 1 per cent of the electorate. Their presidential campaigns are money, man-hours, and credibility wasted, and when the left has so little of all three, squandering any of it is criminal.

The Green Party is the only rooted national force among these efforts, and the smart thing for non-Green forces to do would be to find ways to collaborate and work with the Green Party, strengthen their efforts, and weld an indivisible united electoral front against the two-party state. At a bare minimum, they should list the Green presidential candidate on their ballot lines in 2016 (barring any 2004-style Cobb-ery); 5 per cent or bust is the name of the game if we’re serious about breaking the Democratic Party over the course of the coming decades.

Eugene Debs’ 1912 run where he garnered 6 per cent of the vote on the Socialist Party ticket was his fourth attempt, something to keep in mind when assessing Stein’s first run. Furthermore, the Debs-era Socialist Party was the result of a few splits and many mergers of several national and dozens of local socialist groups that, by 1912, beat Democrats and Republicans to win local and state offices. Today, there are fewer organized socialists than the 6,000 there were in 1898, and we would do well to study our past if we want our future to look dramatically better than our present.

The contrast between Kshama Sawant’s and the Jill Stein’s vote totals could not be more stark, although comparing a district race for statewide office to a national fight for the most powerful political office in the world is a bit more than an apples and oranges comparison. Nonetheless, Sawant nearly topped the combined national votes of all the socialist candidates in a single district! No segment of the American electorate has ever voted for a clear-cut revolutionary socialist against a powerful Democrat by anything close to 28 per cent of the vote, and certainly not with the endorsement of a union local.

Make no mistake: Sawant and Socialist Alternative made history in Seattle. The race was highly unusual because there was no Republican in the running. This was a straight capitalism-versus-socialism contest, and Sawant’s 28 per cent nearly matches the one-third of Americans who say they have a favorable view of socialism. It is proof positive that the potential for a mass-based socialist movement in America far outstrips the actually existing socialist movement’s capacity to translate that potential into something meaningful by at least several orders of magnitude.

So what are the strategic implications of all this?

District and city races are where the action is at, or should be at, while presidential races are (almost) hopeless fights and should be de-prioritized for the time being, given the left’s meager resources and national unpopularity. The best way to get ready to fight for and win 5 per cent of the national vote for a left candidate in 2016 and 2020 is to win some local or state races. Concentrating our attack where the enemy is strongest and where we are weakest is stupidity, a recipe for more decades marked by failure, frustration, and powerlessness. Local races require a lot less money to win, and the danger of billionaires emptying their bank accounts into super PACs to defeat us is far lower than it is when governorships, Senate seats, and the presidency are up for grabs.

If we win office at any level, we will be in a position to begin reversing neoliberalism, using Republican-style obstructionist tactics against Republican attacks, and begin undoing the anti-democratic practices of the American electoral system. This is essentially how Hugo Chavez built massive popular support for smashing and grabbing (or “redistributing”) the wealth and power of Venezuela’s 1% to the 99% over the past decade one step at a time.

Socialist Alternative’s call for Occupy candidates to run in local races is a big step in the right direction. SYRIZA’s near-win in the Greek elections earlier this year exposed the fact that many on the left internationally are deathly afraid of wielding state power within the framework of capitalism, as if there were some other way to stop 1% politicians from slashing and burning whatever is left of social safety nets and union rights (waiting for soviets to form or dual power to emerge has not stopped neoliberalism anywhere, sorry). Modern protest politics – showing up at demonstrations with all kinds of clever and just demands – are insufficient for today’s class war; Greece has taken this brand of protest politics to extreme levels, where 16 general strikes have not stopped the austerity juggernaut.

Until we recognize that we have to wrest as much political, economic, social, and cultural power from the 1% by any means necessary and act on that recognition, we won’t stand a chance at stopping them.

The other strategic lesson of the Sawant campaign concerns the problem of sectarianism/left unity. The International Socialist Organization’s (ISO) refusal to endorse and work with/for Kshama Sawant of Socialist Alternative materially weakened the campaign against the Washington legislature’s Democratic speaker, Frank Chopp. The ISO’s support could have brought much-needed publicity and funds to a dynamic and promising but under-funded campaign since the ISO is the largest revolutionary socialist organization in the country.

Here was an exceedingly rare and golden opportunity to unite a fractured local left against the most powerful Democrat in state politics and instead of seizing the opportunity to weaken the Democratic Party, the ISO refused to get on board, preferring silence, inaction, and isolation while Chopp twisted the arms of unions and nonprofits alike to endorse him or stay neutral (as the ISO did).

Sectarianism must be exposed to the light of day and combated in the here and now, while the stakes are low. When the stakes are high, we cannot afford the “luxury” of this kind of needless and counterproductive sectarianism. In Greece, the Communist Party’s (KKE) sectarianism toward the Coalition of the Radical Left (SYRIZA) gave the European Union’s banksters the security of knowing they would face a workers’ movement and a left unwilling to unite, and like Germany in the 1930s, the Communist Party’s unwillingness to unite has opened up the space for a menacing fascist movement, the Golden Dawn.

What we really need is an American SYRIZA, not an American KKE in miniature. Creating one and overcoming the other remains our central task. •