Capitalist Life-Crises and The North American Left: Problems and Prospects

The struggles across the Middle East and North Africa and on-going resistance to austerity in Europe catalysed a fightback in North America – the Occupy Movement – that no one saw coming. Together, all testify to the pervasive and deepening crisis of capitalism, not just as an economic system, but as a comprehensive way of living and valuing.

This civilizational crisis creates the opportunity for a renewal of socialist politics, but also poses hard questions to socialists: what does capitalist crisis mean on the deepest levels, what are the lessons of the Occupy movement, what ought our relationship to existing political and social institutions be, and how to do we go about building a broad democratic movement that has a plausible chance of overcoming capitalist life-crises? The following ten theses aim to be part of a conversation, not the conclusion to an argument.

1. Human beings are facing life-crises on all planes of being alive – biological, social, and cultural-spiritual. The life-support capacities of the natural world upon which all planetary life depends continue to suffer under the materially irrational growth dynamics of global capitalism. The social institutions that enable human life to develop its socially self-conscious, self-creative, and self-determining capacities are one and all subordinated to the task of ensuring system-reproduction. As the strains of the system against its material limits become sharper, social reproduction more and more loses the appearance of being voluntary. In the countries where liberal-democracy has predominated for the past century, political life is becoming more authoritarian. The fruits of centuries of struggle of the working-class and oppressed to participate as equals, to secure access to the goods and institutions all require to survive as organisms and to express and enjoy their life-capacities as human beings are being undermined. All social institutions – economic, political, educational, health-related, artistic – are subordinated to the task of ensuring the conditions for the profitable exploitation of labour. The reigning mono-value of capitalism, the private accumulation of money-value, exhausts not only the resources of the planet and the democratic potential of social institutions, but also the very meaning of life. In place of a world rich in intrinsic values, mutualistic relationships, and free time to experience the beauty of nature, other people, and our individual and collective creations, we have rapacious private appropriation on one side and increasingly desperate struggles simply to survive on the other. 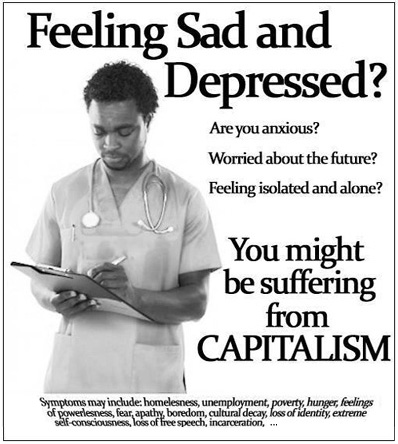 2. The growing material, social, and cultural-spiritual exhaustion of capitalist civilization is becoming more evident to ever more numbers of people. The Arab Spring, struggles across Africa it has inspired, on-going resistance to austerity in Europe, the Occupy movement in the United States and Canada, and the still unfolding experiments in twenty-first century socialism in Latin America are linked at the deepest moral level by consciousness of the universal life-values threatened by capitalism. Life-values are resources, relationships, institutions, and practices that satisfy natural and social life-requirements as well as the enjoyed expression of the life-capacities the satisfaction of these requirements enable. A materially rational form of civilization ensures the comprehensive satisfaction of life-requirements for the sake of ensuring that finite life-times are as rich in intrinsically valuable experiences and activities as possible. Capitalism, by contrast, treats life-requirements as forms of weakness that can be exploited to make people dependent upon labour and commodity markets. The more dependent people can be made to be, the more ruthlessly they can be exploited. Proving its material irrationality, capitalism attempts to solve its on-going crisis by intensifying the dynamics that demonstrably caused it in the first place.

3. Across all species, care of the young is a primary reproductive imperative. The “higher” species combine physical protection with what can only be described as active caring and nurturing. In human beings our relationships with our young often elicit our most noble and loving capacities. Parents, relatives, and friends of young people devote themselves to their well-being, would be willing to do anything to secure it, including giving their lives if that is necessary. Capitalism inverts the moral order of care of the older for the younger. It blindly, brutally sacrifices the long-term interest of the young in finding meaningful ways to express their capacities and contribute to their world to the selfish interests of the one per cent in appropriating even more money value to themselves. Youth unemployment and anomie are epidemic across the globe.

4. Because the lives of young people too often combine present misery and future hopelessness they have taken the lead in mobilizing new, mass democratic, non-violent demands for fundamental transformation on each of the three planes of being alive discussed above. From Spain to Egypt to Russia to America the young of the planet are demanding sustainable economic practices, new democratic social relations, need-governed access to public goods of all sorts, a new spirit of civility, social peace, mutuality, and collective commitment to enabling individuals to live purposeful lives.

5. The fruits borne by these movements have been impressive. Not only have dictatorships been overthrown, everyone in the world has been re-taught one of history’s most valuable lessons: that a democratically mobilized population can achieve without weapons what great powers with all means of violence at their disposal cannot: genuine social progress. Genuine social progress is not measured by the name of the class or party in power, but by the degree and extent to which natural wealth is utilized to sustainably satisfy our basic life-requirements, and social institutions organized to inclusively enable the participation of each in the governance of collective life of all, for the sake of the free development of each in ways that contribute back to the sustaining social whole.

6. At the same time, the limits of resistance are becoming clear as more established social and political Islamic movements capture the fruits of power in Egypt and Tunisia and the anti-austerity and Occupy movements in Europe and North America suffer varying degrees of repression. Recapturing the political initiative will require the construction of new positive, realizable demands and projects, rooted in the specific histories and local contexts in which mobilizations occur.

7. In the North American and European contexts this means that a new left must confront the obsolescence of vanguard-revolutionary parties on the one hand and the exhaustion of social-democratic politics as a constructive force on the other. At the same, a new left needs to re-evaluate its critique of “bourgeois-democratic” institutions. There is nothing intrinsic to the institutions of local or national democracy (municipal councils, school and hospital boards, community cultural groups, legislative assemblies, parliaments) that restricts them to purposes of system-reproduction only. In fact, the principle according to which they continue to justify themselves – self-governance in the shared life-interest – is the fundamental political solution to the life-crises described above. The problem is subservience of these institutions to a life-blind ruling value system, not the structure or form of the institutions themselves.

8. The problem a new left faces in Europe and North America is not so much theoretical – proving to people that capitalism is systematically unjust – as it is practical. At the practical level the problem is not so much motivating moment to moment resistance as it is finding ways to effectively institutionalize demands. Here the weakness of “horizontal” movements like Occupy becomes evident. At small local scales leaderless horizontal movements can be temporarily effective at creating and maintaining liberated zones and experiments in consensual participatory democracy. When the problem turns from maintaining an encampment of a few hundred or a few thousand people to the task of democratically determining the priorities of the national budget, for example, or maintaining a just legal system, vertically organized institutions become necessary. State power articulated through democratic institutions at local, regional, and national levels coordinates the resources of the society to ensure that they are utilised so as to satisfy that which each and all require to live and flourish. A new left needs to re-think the potential of existing state and social institutions as the vehicle by which a democratic life-economy and society can be built. Entire countries cannot be run by consensus, if for no other reason than that there are many valuable ways to spend one’s time, and not everyone in a free society will choose to devote all of their time to politics. The movement toward free societies requires experiments in self-government like Occupy, but they also require free institutions that coordinate the actions of many millions of people across social space and time.

9. Free institutions do not need to be created ex nihilo. Part of the problem discussed above – how to effectively institutionalize change – has already been solved by those institutions, or those aspects of institutions, that already recognize and satisfy the life-interests that they developed to satisfy. To the extent that politics does function democratically, schools function so as to educate students, hospitals to cure the sick, cultural institutions to nourish our creativity and solidarity, and so on, we have an achieved level of, to use a term from the work of John McMurtry, “civil commons” development that is an actually existing alternative to capitalism. The resources, the ideas, the creative capacities required to satisfy fundamental life-requirements comprehensively and sustainably already exist. So too the social knowledge required to justly distribute wealth. So too the knowledge of how to organize power democratically. The solutions to history’s fundamental problems already exist.

10. A future new left must be positive and constructive if it is to be anything at all. A positive and constructive new left, while mindful of the structural contradictions of capitalism, cannot treat these as a reason to not act in the present on demands that make some people’s lives better but leave structural problems unaddressed in the short term. Theoretical models of wholesale alternatives to capitalism have a place, but have not proven capable of mobilizing large numbers of people in Europe and North America in ways that have effectively institutionalized real gains. Instead, the losses continue to mount. The first crucial task of an effective new left must therefore be to work out a short term agenda that builds mass support and that can be realized within existing institutions, but at the same time pushes those institutions away from their current life-blind function toward their life-valuable reason for being. •