The Consequences of the EU Bank Rescue

Through the second half of 2011 there were persistent signs of financial stress in many banks right across Europe – not only in Greece, Ireland, Portugal, Spain and Italy, but in France and even Germany too. The banks were already struggling to meet the higher capital and reserve requirements that have been emanating from the Basel III international regulatory proposals, as well as to meet public expectations of a resumption in lending to help the economic recovery. But in addition, the continuing uncertainties about Eurozone sovereign debt led to a seizing-up of the interbank loan market, and the supply of term deposits and medium-term lending to banks, on a scale not seen since the 2007-08 credit crunch. 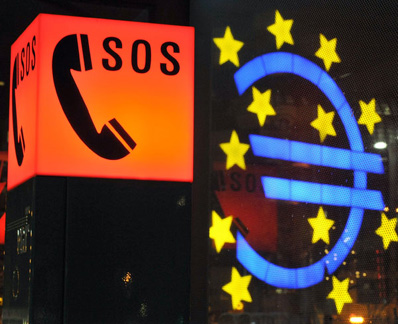 However, the unexpected and massive loan interventions by the European Central Bank (ECB) in December and February appear to have completely transformed the picture. The new head of the ECB, Mario Draghi, invited all Eurozone banks to apply for unlimited loans at 1% interest and up to 3 years’ duration, and has thereby pumped over €1-trillion of liquidity into the banking system. The loans under the Long-Term Refinancing Operation (LTRO) were made available to all banks operating within the Eurozone, not just those owned and headquartered in the zone, so even UK banks have been able to borrow, albeit only within their Eurozone subsidiaries. The total amount lent was €489-billion in December, and a further €530-billion on February 29th.

Creditors Get Their Way

This move by the ECB took most commentators by surprise. Their attention was focused firmly on the sovereign debt problems, and when Draghi took office he made it quite clear that he was not about to take up the proposals by Keynesian critics of austerity for the ECB to directly support the sovereign debt market by large-scale bond purchases, or to consider the pooling of risk by means of exchanging national sovereign debt for ‘Eurobonds.’ Given the continuing failure of Europe’s political leaders to resolve the marathon Greek crisis and reassure the bond markets over the risk of contagion, it was politically impossible for Draghi to openly challenge the dominant views of Eurozone creditor countries, who were adamantly opposed to such a resolution.

So what is the significance of this new ECB policy? First, the ECB has provided significant breathing space for European banks, given their need to refinance their loan books, build up their reserves and increase net lending to help the recovery. Second, the banks have used some of their new borrowing from the ECB to buy Eurozone sovereign debt, easing the pressure on national governments. Thirdly, it has brought a political breathing space while the Eurozone’s national governments try to reach agreement on the long-term objectives of a de facto fiscal compact and a new European Stability Mechanism.

With regard to the banks themselves, in the run-up to the December loans it was increasingly clear that a major source of worry for Eurobanks was the drying-up of lending from U.S. money-market funds – a major component in the so-called ‘shadow banking system’ in the USA. Such lending had funded a large proportion of Eurobank purchases of U.S. asset-backed securities during the run-up to the 2007-08 credit crunch, and many of those loans were due for repayment in 2011-12. As the Eurozone debt crisis dragged on through 2011, the U.S. funds cut back their exposure to both sovereign debt and European banks, reducing such lending from 30% of their assets to around 10%. But since December, they have begun once again to lend to European banks: this indicated their need to find profitable use for their mountains of cash, their increasing confidence that the U.S. and global economies would avoid a double-dip recession, and their view that the Eurozone would at least muddle through the sovereign debt crisis. Nevertheless, this return to borrowing from U.S. money market funds carries significant risks, in the view of Eurozone financial authorities, precisely because they don’t want the banks to rely on short-term borrowing. Instead, they hope that the general easing of what was shaping up to be a severe credit crunch will allow banks to raise much longer-term finance to enable them to meet the Basel III capital requirements and go on to finance a European recovery.

In relation to the sovereign debt crisis, while the cost of borrowing has fallen significantly, it is not clear how far this has been directly the result of the LTRO. Historians of the crisis will recall that in 2009, when the U.S. Federal Reserve and the Bank of England embarked on their policies of quantitative easing (QE), the ECB instead, as The Economist put it, “offered unlimited loans to commercial banks for up to a year against a broad range of collateral.” The result was much the same as that of QE in the USA and UK: “Banks used much of the cash to buy government bonds, which drove down long-term interest rates.” What is more, the ECB has discreetly helped to manage the sovereign debt crisis in another fashion: through its role as a clearing-house for the settlement of intra-Eurozone foreign trade, a system known as Target2. By December 2011, the German Bundesbank was in credit with Target2 to the tune of €495-billion, which in practice means that Germany has lent this sum to the Eurozone trade deficit countries, especially Greece, Ireland and Portugal. By giving help in this discreet way, the ECB has in effect protected Chancellor Merkel and the Bundesbank from the wrath of German public opinion.

In any case, since December 2011, Italian and Spanish banks have bought their own governments’ debt, but it is hard to separate out this factor from the generalized support that the bond markets have shown following the accession to power of first Mario Monti and his ‘government of technocrats’ in Italy, and more recently the Partido Popular under Mariano Rajoy in Spain. Whether the bond markets will remain supportive will depend on their economic and political expectations through the rest of this year. The announcement on March 8th that Greece’s private creditors have accepted their ‘haircut’ may turn out to be another flash in the pan, if the Greek economy continues its precipitous decline under the weight of austerity.

The Future of the Eurozone?

And this brings us to the broader question of the future of the Eurozone, and indeed the EU as a whole. At present it looks as though the trumpeted December agreement on a fiscal compact will be ratified by those national governments that signed up to it, although the process could be delayed or even derailed, if the Irish government finds itself obliged to hold a referendum. At the same time, businesses, households and investment institutions are sitting on huge mountains of cash, which are not going to be spent unless and until ‘confidence’ is substantially restored. Right now, while there are continuing signs of some economic recovery in North America, Europe as a whole is at best stagnating, while China and other so-called emerging economies are experiencing a slowdown. The prospect of accelerating public spending cuts, especially across nearly all of Europe, is increasingly troubling not just Keynesian converts like Martin Wolf of the Financial Times, but also those bastions of neoliberalism, the International Monetary Fund and the Organization for Economic Cooperation and Development.

However, we should not forget the old maxim “never waste a good crisis.” The media debate over the Eurozone has viewed the political drama of summits and compacts very largely in terms of the issue of national sovereignty and EU governance, which has dogged the entire European ‘project’ ever since 1958. But the underlying story which needs to be brought into the spotlight is the way this sovereign debt crisis is being used to accelerate the implementation of neoliberalism across the EU and beyond.

In this respect, market liberalization and deregulation may be just as important as fiscal and monetary policy. To a considerable degree, Germany’s relative economic success since 2000 is not because of superior management, high technology and ‘patient’ bank finance, but the Hartz series of labour market reforms. These have had two particularly important consequences: first, they led to the creation of several million mostly part-time and ‘flexible’ jobs, which has reduced the headline rate of unemployment; and second, taken together with the relentless campaign of the mainstream parties (especially the SPD) and the media, the penetration of the ideology of competitiveness into the more privileged full-time workforce. This was reinforced in 2008-10 by government initiatives to support the adoption of shorter working hours, as an alternative to layoffs that would disperse job skills and demotivate the workforce.

“…it appears to have escaped most liberal commentators that if all countries pursue this strategy [of austerity], they will end up on a downward spiral of reduced incomes and lower consumption, together with a system-wide redistribution of income from wages to profits.”

The German ‘success story’ has now become the European equivalent of the Washington Consensus, through which neoliberalism was imposed across the less developed world in the 1980s and 1990s. In the Euro-periphery, flexible labour markets, deregulation of the professions and the privatization of the public sector have formed the core of the ‘reform’ programmes in Spain, Italy and Portugal, as well as most notoriously Greece. Ireland already had an exemplary neoliberal political economy before the crisis, although this does not appear to have spared them any of the rigours of austerity. These programmes are presented as absolutely necessary to restore national competitiveness through reducing costs of production; it appears to have escaped most liberal commentators that if all countries pursue this strategy, they will end up on a downward spiral of reduced incomes and lower consumption, together with a system-wide redistribution of income from wages to profits.

Although having no direct role in its implementation, the ECB has nevertheless played a vital role in disseminating the ideology of market liberalization and national competitiveness, revealed recently in Le Monde Diplomatique. Presenting itself as ‘apolitical and run by technicians,’ the ECB is now busy transferring this mantra to the new governments under its de facto control in Greece and Italy. Governments elsewhere in Europe, regardless of their supposed political colour, are using the Bank as cover for their uniform policies of austerity and liberalization. Furthermore, the resumption of neoliberal ‘business as usual’ has the support of the great majority of ‘mainstream’ economists, many of whom have now been ‘outed’ as the paid servants of private finance and big business.

But in addition, the ECB’s LTRO provides a loan period of three years, not the one year period offered in 2009. Unless the Eurozone’s plans for a fiscal compact and a larger stability fund come seriously unstuck in the meantime, this has the important consequence of providing a breathing space to implement the revamped neoliberal model more fully. Twenty years ago, the European centre-left actively pursued the alternative ‘social Europe’ model, but signally failed to convince the European public sufficiently to head off the neoliberal juggernaut. This time round, we somehow have to do better; otherwise we face not just years of austerity, but the final dissolution of the postwar welfare state in Europe. •