Greece on the Brink of Emergency: A Matter of Days

In Greece a number of factors stand out, suggesting that Greece is on the verge of some major changes. The disruption of basic operations of the state in conjunction with the wide spread certainty that the Greek debt cannot be controlled (constant rumours for default in the coming period) compose the picture of political instability and crisis which seems to be the precursor of a more generalized political crisis to be spread in the rest of the south European regimes first and possibly to the heart of the Eurozone given the accelerated tensions of the financial crisis and the disagreements among current leadership in the Eurozone. The remaining days leading up to summit of the EU leaders, on the 23rd October, and the G20 summit in the first week of November are considered crucial. Something has to give, and soon. And, it could go in many different directions. For better, or for worse. Rumours, which may or may not be true, are circulating regarding possible deployment of the EuroGendFor (European Gendarmerie Force) military personell being called to Greece in the days ahead.

On the one hand, there has been an incredible level of political activity and mobilization from very broad layers of society. This has continued to intensify, bringing in ever greater numbers and becoming more and more continuous as the crisis has deepened much further since 2009. The line of the movements follows this general scheme: broad student movement and riots during 2006-07 before the official announcement of the Greek debt crisis; weeks of urban rioting that took place in December 2008 as young people responded to the police killing of a teenager; mass demonstrations; 13 general strikes since the IMF deal; most political form of the movement of indignados (compared to the similar movement in Spain); the last step in this series of resistances is expressed through occupations of public spaces, and strikes in key industries such as transport or railways.

Austerity and Privatization on the Rise 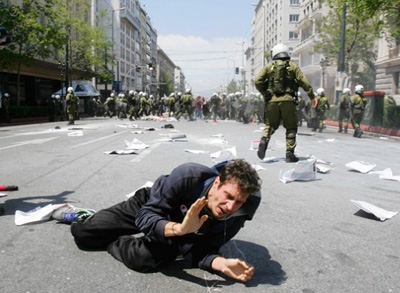 On the other hand, this high level of mobilization has not stopped or even slowed down the pace of austerity measures, nor the mass privatizations, and repression has been growing. Protests have been met with extreme police violence, and increasingly strikes are being declared illegal.

Despite high levels of organizing, people report a profound sense of despair, and no clear sense of alternatives being built by people. There is widespread panic and a general sense of economic, political and mainly social collapse. Increasingly the reproduction of massive parts of the society is becoming more and more difficult, as society’s functioning grinds to a halt. Nothing is working, neither public services nor private deals.

Political organizations, such as parties on the left side of the spectrum to groups in the anti-authoritarian or autonomous spectrum, are under enormous pressure. The acceleration of the economic crisis has resulted in a serious political crisis and the complete lack of a concrete alternative is obvious. Voices on the left spectrum have begun whispering about the need to form a left government constituted by a broad coalition of the left parties and smaller groupings. However, they have been unable to articulate this idea in such a way that it has been able to inspire the broad movements and struggles which have appeared in a very sudden and decentralized way. This is despite the fact that these parties are actually potentially very strong, as they account for 26% in the polls, while the party in government accounts for only 15%, with almost 50% of the voters having declared that they will abstain from voting in any future elections.

The range of left parties includes: Syriza, a left coalition born after the decade of Social Forums; the Communist Party (KKE) – a traditional communist party with its own unions, that are widely criticized for being reluctant to join with the rest of the left in some type of coalition; Antarsia, a small coalition of anti-capitalist groups; and the Ecologists-Greens, a relatively new party linked to the European Greens).

People are under huge pressure. Increasing sections of the population are unable to pay taxes, pay back loans or even ensure the satisfaction of their basic subsistence needs, such as electricity, health services, housing etc.

Unemployment is increasing fast, and is expected to reach an average of 25% in the first semester of 2012. High taxes are being imposed through electricity bills, and the economy has contracted fast, and fear, or even panic, reigns among large parts of the active population. All of this has created a fluid mass of ex-workers, as well as over-exploited and insecure employees. These people are not connected to the traditional trade unions (these are the unions which have traditionally been, for the most part, attached to the two main political parties, i.e. the ruling PASOK party, and Nea Dimokratia, which was in power until it lost the elections in 2009). Unemployment and insecurity mainly affect the younger generations, which are forced to emigrate (mostly to Northern and Central Europe, and also Australia and Canada). This is especially so for high-skilled workers and those with university degrees.

The level and intensity of struggles have grown rapidly since the summer and during the first weeks of October. The Greek version of the indignados movement (Aganaktismenoi in Greek), which ended with riots in the mid July, seems to have completed its first cycle of existence, leaving behind a space for a broad basis for interaction among different movements and groups across the country. This has expressed itself in the form of many decentralized and spontaneous activities such as strikes and occupations in the public sector, mass demonstrations and rioting have been taking place. During this period, new forms of struggle committees have emerged, increasing the number of participants and showing a willingness to unite behind the call for a 48-hour strike which was issued by the General Confederation of Workers (GSEE) and the Confederation of public servants (ADEDY) for the 19th-20th October. Although these committees are still very new, they have already shown themselves to be highly stable. They vary both in the form and place of struggle, ranging from low level unions in workplaces, to assemblies that organize occupations and neighbourhood assemblies that organize local struggles and unite during major calls, such as calls for demonstrations in the centre of Athens.

Several new forms of struggle have been born during this period. This includes occupations of eight ministries and government offices, disruption of operations at different levels of the state, from local authorities all the way to state services such as tax offices and courts etc., the occupation of productive infrastructure (means of public transport, railways, occupations from the powerful union of workers in the Public Power Corporation). Every day smaller protests also disrupt the regular functioning of commercial, economic and social life. However, this high level of mobilization has, until now, not managed to stop or even slow down the pace of austerity measures, nor the mass privatizations.

Furthermore, the efforts at creating a concrete and broad organizing umbrella of all these movements has, so far, not given rise to any kind of new institutional form. Left parties, activists and workers meet during these struggles in a rather chaotic way. It is becoming increasingly important to try to ensure that these committees which have emerged become legitimate focal points for building and defending mass based popular power through struggle.

Until now the government has been trying to avoid any uncontrollable explosion from below (such as the ongoing occupations in the public power corporation, strike of workers in the cleaning sectors of the local authorities). Repression has been growing. Street protests are met with increasing levels of violence from the police. More and more strikes are declared illegal, and private companies are being hired by the government to take over tasks that are not being carried out due to occupations and strikes in the public sector etc. The army has even been called in to clean city streets, as cleaners are on strike.

Things are now coming to crisis point, and it is a matter of days. In the run up to the summits mentioned above, the movement from below is intensifying its actions through strikes and demonstrations across the country. At the same time as mass activities are increasing, the government is also making moves from above, apparently in preparation for what will follow should the current government resign, and these plans are taking the anti-democratic measures to new levels, based around a state of emergency.

Certain moves from within the government show that this week is probably the most crucial of the crisis period in Greece. Especially important in this regard is a long article signed by three important ministers on Sunday the 16th October, and supported from the minister of finance V. Venizelos. This article calls for people to loyally follow the policies agreed with the IMF, and to establish the consent of the silent majority against, the so-called vocal minorities who are disrupting the country’s political functioning. This has incredibly anti-democratic and authoritarian overtones, suggesting the urgency of the situation.

Another important factor that adds to the image of a collapsing government is that increasing numbers of important trade unions and very large numbers of party members have been withdrawing from the ruling PASOK party, as well as one member of parliament. Rumours are rife about what scenarios might develop in the next-days, and it is virtually impossible to know which have their basis in truth and which do not. This includes the rumour that some kind of new anti-democratic social and political compromise will be established among the different centre-right parties, in the form of a national unity government, or the installation of a government of technocrats, or the installation of a state of emergency etc., in order to pre-empt the threat of an even worse scenario unfolding, a threat which remains unspoken from all sides. Presumably, this unspoken threat, which established political authorities understand all to well, is the threat of revolution from below. The question of political power is on the table, and the political crisis will be resolved in the struggles in the days and weeks ahead, in one way or the other.

This is a call for people in Europe, and other parts of the world, to watch closely the developments in Greece, and to be ready for the next stages in the development of this political crisis, which soon spread, in all probability first to other parts of Southern Europe, and later to the European Union as a whole. The political crisis in Greece has taken approximately two years to reach its climax, and this time frame is likely to be greatly reduced in other countries as the European and global crisis accelerates. There is no time to loose. •

Aris Leonas is an activist in the Greek anti-austerity movements.